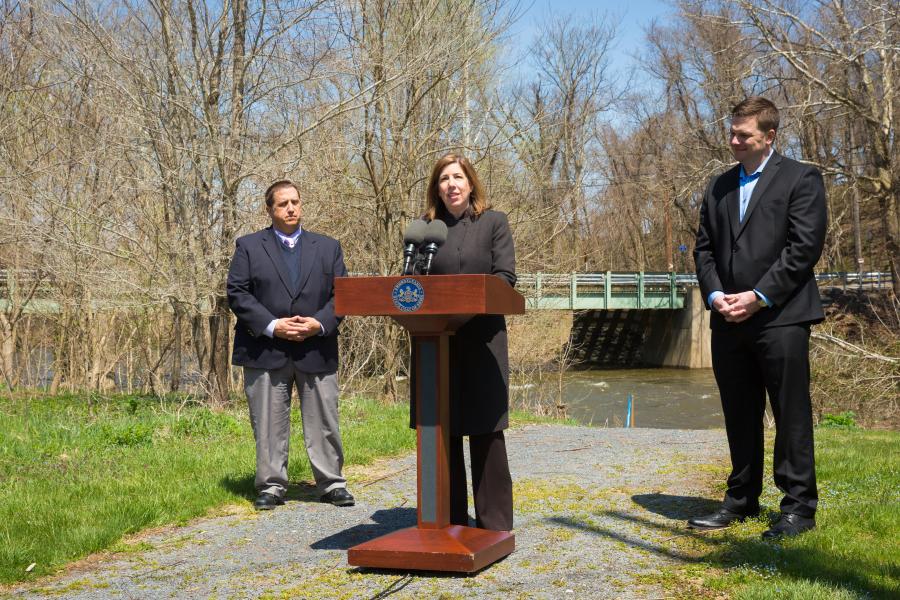 There are 390 bridges complete and open to traffic with 50 under construction in the state’s public-private partnership (P3) for bridges, the Rapid Bridge Replacement project, Pennsylvania Department of Transportation Secretary Leslie S. Richards said at a media event April 18, 2018.

There are 390 bridges complete and open to traffic with 50 under construction in the state's public-private partnership (P3) for bridges, the Rapid Bridge Replacement project, Pennsylvania Department of Transportation Secretary Leslie S. Richards said at a media event April 18.

As part of the statewide project, an additional 20 bridges are expected to start construction and eight are scheduled to complete construction by the end of April.

“We are making significant investments in bridges across the state to enhance safety and commerce,” Richards said. “This project complements our robust program by further reducing our number of structurally deficient bridges.”

Through the project and other PennDOT investments, more than 1,600 bridges were repaired or replaced from 2015-2017 and the number of structurally deficient state-owned bridges, or bridges considered in poor condition, has dropped to 3,098 from a high of more than 6,000 in 2008.

The Rapid Bridge Replacement Project originated in 2013, when PennDOT was challenged by an aging, structurally deficient bridge inventory and limited funding and resources. The P3 approach allows PennDOT to replace 558 of its poor-condition bridges more quickly while minimizing impact on motorists.

Tasked with delivering an $899 million design and construction project, Plenary Walsh Keystone Partners is financing, designing, constructing and maintaining the bridges. PennDOT will be responsible for routine maintenance such as snow plowing, debris removal and incident first response.

“Plenary Walsh Keystone Partners is honored to be partnered with Secretary Richards and her team at PennDOT on the Rapid Bridge Replacement Project,” said Ed Dice, head of delivery of Plenary Group. “Together, we have taken an innovative approach to finance, replace and maintain more than 500 bridges across Pennsylvania, and this approach is being closely followed in the global infrastructure community.”

The consortium of companies within the development entity includes, Plenary Group USA Ltd. and Walsh Investors LLC, which are providing financing and long-term management; a joint-venture construction team of Walsh Construction Company and Granite Construction Company; HDR Inc., which is the lead design firm; and Walsh Infrastructure Management, which will provide maintenance for a 25-year period upon completion of the bridges.

To see the bridges included in the statewide initiative and to learn more about the Rapid Bridge Replacement Project and P3 in Pennsylvania, visit www.p3forpa.pa.gov. Additional information on the project, the team, how to bid on the project or requests for special needs or accommodations to aid public participation can be found at www.parapidbridges.com or by calling the project hotline at 877/444-9990 or email [email protected]