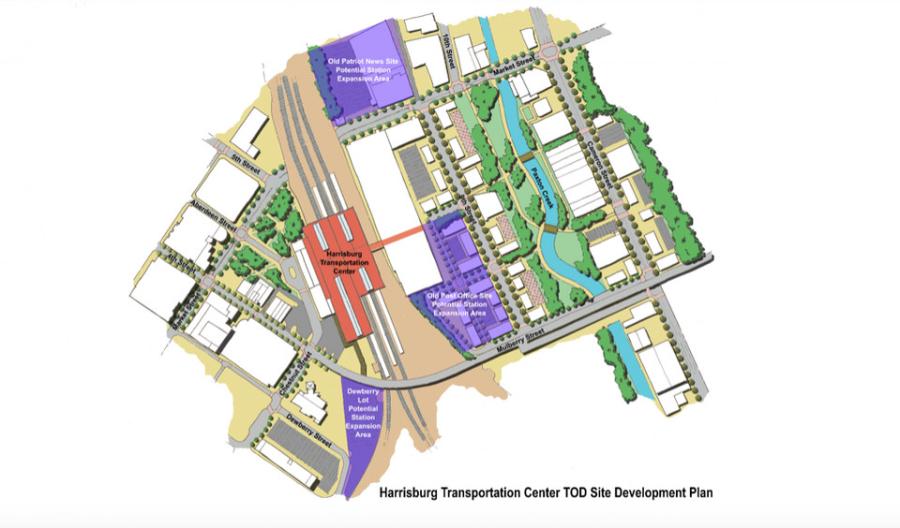 PennDOT Secretary Leslie S. Richards announced two new significant studies aimed at laying out a road map for enhancing the Harrisburg Transportation Center and the area adjacent to the station.

Richards announced completion of the Harrisburg Transportation Center Transit Oriented Development Master Plan and the Paxton Creek Restoration Master Plan, both viewable on the department's Plan the Keystone website. PennDOT held a public meeting on March 22 to continue to gather community input on the studies.

“These two studies serve as a road map to help the city continue to develop as an attractive place to work and play,” Richards said. “Our interest stems from our commitment to Governor Tom Wolf's vision of a government that works. We have worked hard to develop the Keystone passenger rail corridor and improving the Harrisburg Transportation Center and the surrounding area will help build ridership.”

Richards also noted that the department has completed 90 percent of the design for the $15 million station renovation and is working with Amtrak regarding a construction schedule.

As PennDOT studied the opportunities to develop the area around the Transportation Center, it became apparent that flooding on Paxton Creek presents a significant obstacle. The Paxton Creek study outlines potential steps to modify the channel size and make other improvements that would take 133 acres out of the 100-year flood plain and partially remove an additional 275 acres. Those steps would mean development on these tracts would not be required to have flood insurance and would make it much more attractive to developers.

The Paxton Creek plan also envisions enhancing the creek area with recreational paths and restoring the area to a much more natural, inviting environment.

The next step is to create a comprehensive implementation team that will undertake detailed field surveys, hydrologic analysis, and preliminary design to confirm project feasibility and acquire the necessary federal and state permits.

“These projects will provide exciting opportunities for development in the city of Harrisburg, and for enhancing the quality of life for our residents,” said Harrisburg Mayor Eric Papenfuse. “We look forward to continuing our close collaboration with PennDOT on projects that will benefit not only Harrisburg residents but the entire region.”

The estimated cost to deliver the creek improvements is roughly $60 million to $90 million and it will take at least four to five years of work before construction could begin. Funding sources could include grants from the state Multimodal Fund, the Department of Community and Economic Development, and the Department of Conservation and Natural Resources.

For the Transit Oriented Development study, PennDOT worked with the city, the Harrisburg Redevelopment Authority, Amtrak and Norfolk Southern, and did extensive public outreach, including a visioning week in September 2016 that involved 17 public events that gathered stakeholder and public input that guided the development of the report's conceptual designs.

The study determined that the transportation center and the adjacent area possess potential for a new transit-oriented mixed use development, which would help revitalize the city. The study also calls for improvements to Market and Cameron streets and a direct connection between the station and the parking areas to the east of the station.

“Transportation is a catalyst for economic development and a better quality of life,” Richards said. “We are enthusiastic about the future of Harrisburg, and these studies will help guide the city as it moves forward.”