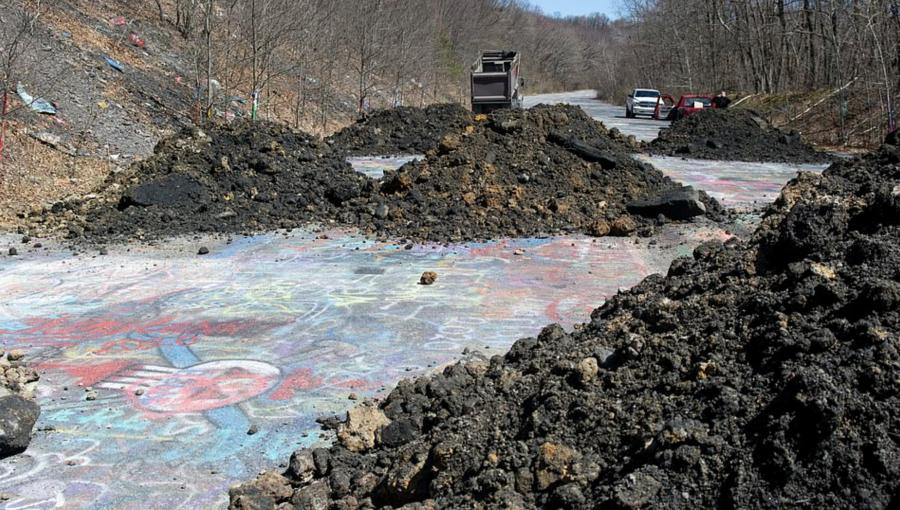 Pagnotti Enterprises, the Luzerne County-based company that took title to the land several years ago, hired Fox Coal Co. Mining to truck 400 loads — between 8,000 to 10,000 tons of dirt (AP photo)

After 58 years on fire, it's taken a global pandemic and a stay-at-home order to put an end to the ghost town-turned-tourist-attraction in Centralia, Pa.

The site of an uncontrolled, underground coal fire since 1962, this strip of Route 61 known as Graffiti Highway has been covered with dirt by workers with heavy equipment and shut down after visitors swarmed the site during the coronavirus lockdown.

Graffiti Highway has long been a popular stop for tourists visiting the Keystone State, but ever since Pennsylvania and its surrounding states have issued stay-at-home orders for residents amid the COVID-19 crisis, the roadway attraction has seen an even greater influx of people. Large, rowdy crowds have been gathering at the hot spot in recent weeks. Some have brought their dirt bikes and all-terrain vehicles to race down the abandoned stretch of pavement. Tailgating partiers, wielding spray cans have left piles of litter and assorted damage.

"State troopers have been monitoring the Graffiti Highway more intensely and have struggled to keep up with the large swaths of visitors," said Tom Hynoski, Centralia's fire chief and emergency management director. "The owners got fed up and felt that the site posed a serious problem."

Pagnotti Enterprises, the Luzerne County-based company that took title to the land several years ago, hired Fox Coal Co. Mining to truck 400 loads — between 8,000 to 10,000 tons of dirt — to cover the unofficial popular tourist destination.