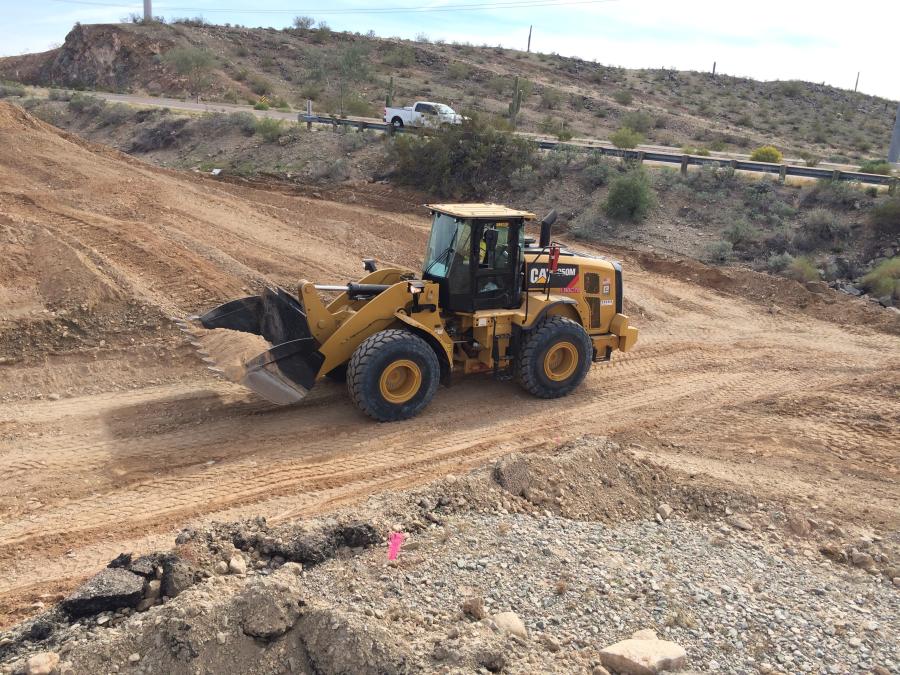 Arizona Department of Transportation photo Second phase construction is under way on an ambitious $1.77 billion project to construct a 22-mi. (35 km) freeway loop to connect the east and west valleys in the greater Phoenix area

Second phase construction is under way on an ambitious $1.77 billion project to construct a 22-mi. (35 km) freeway loop to connect the east and west valleys in the greater Phoenix area.

The Loop 202 South Mountain Freeway is Arizona's largest single highway project ever. The $1.77 billion amount provides for fiscal years 2016 to 2020 including design, right-of-way, construction and utility and administration costs.

The project is being paid for through state, federal and voter-approved transportation funds. It is expected to significantly improve mobility in the area.

“The 22-mi.-long freeway, which was twice approved by voters in Maricopa County, will provide a direct link for commuters traveling between the east valley and west valley and a much-needed alternative to taking Interstate 10 through downtown Phoenix,” said Dustin Krugel, public information officer at Arizona Department of Transportation. “The South Mountain Freeway is also the last piece to complete the Loop 202 and Loop 101 freeway system necessary for high-quality regional mobility.”

The Loop 202 South Mountain Freeway also is expected to provide an economic boost to the area.

“Time is money and the South Mountain Freeway is designed to save both for a fast-growing region,” Krugel said. “When it opens by the end of 2019, this long-planned link between the east valley and west valley is projected to deliver an immediate savings of 15 million hours of travel time worth $200 million over the course of the year.”

The first phase of construction on the Loop 202 South Mountain Freeway began on Sept. 19, 2016, with improvements at the Interstate 10 and Loop 202 (Santan Freeway) interchange in the east valley. The second phase of the project will carry through late 2019.

The new freeway loop will provide much needed traffic relief to existing freeway corridors and local streets. It will run east and west along Pecos Road and then north and south between 55th and 63rd avenues, connecting with Interstate 10 on each end.

As for phase 1, workers continue to widen the shoulders and extend the existing Loop 202 interchange.

Because of its size, Loop 202 freeway construction is divided into four segments: I-10 Papago, between the I-10 (Papago Freeway) interchange at 59th Avenue and Lower Buckeye Road; Salt River, from Lower Buckeye Road to 51st Avenue near Estrella Drive; Center, from 51st Avenue to 32nd Lane; and Pecos Road, from 32nd Lane to the I-10 at Loop 202 (Santan Freeway) interchange.

Construction will occur concurrently on multiple segments throughout the length of the project.

In the first half of 2017, construction will occur in all but the center segment, where work isn't scheduled to begin until mid-2018.

To address the challenge of a massive project, Arizona Department of Transportation partnered with private developer Connect 202 Partners to design and build the freeway and maintain it for 30 years. Fluor, Granite Construction Co. and Ames Construction, together with highway maintenance services contractor, DBi Services, formed the Connect 202 Partners team that combines local, national and international highway design-build and maintenance experience to deliver this first-of-a-kind public-private partnership for the Arizona Department of Transportation.

Parsons Brinckerhoff Inc., based in New York, is the lead designer of the project.

Crews working on the first phase of the Loop 202 South Mountain Freeway project widened the shoulders and extended the existing Loop 202 high-occupancy vehicle lanes from Pecos Road near 48th Street to the I-10 and Loop 202 interchange.

Most of the initial phase of construction at the I-10 and Loop 202 interchange was completed prior to work on the mainline freeway, which began in early 2017.

One lane of eastbound Pecos Road traffic traveling to eastbound Loop 202 was maintained during the initial construction phase.

Completing most of the first phase of work by the end of 2016 allowed crews to start on a detour route along Pecos Road for when freeway construction is occurring on the current alignment of westbound Pecos Road. ADOT will widen the existing eastbound Pecos Road lanes to maintain two-way traffic flow during all phases of construction.

Connect 202 Partners is mobilizing equipment for work on the I-10 Papago, Salt River and Pecos segments. It is using mostly new equipment to reduce maintenance downtimes and lower the level of engine noise in residential areas.

Subcontractors also will be bringing equipment on site.

Dirt will be brought in to raise highway and interchange foundation levels.

Connect 202 Partners will be self-performing earthwork, drainage, bridge construction, traffic control and asphalt paving, while managing other aspects of the project.

The team will contract for design and engineering support, security, hauling services, environmental cleanup, demolition, clearing operations and landscaping. They will bring in about 100 subcontractors over the next three years. The project also will feature about 1,400 crafts workers.

He pointed out there are currently no connections to the south from the Gila River Indian Community. The half-diverging diamond interchange will provide access to the Ahwatukee community north of the interchange.

It is anticipated that most of the interchanges will be elevated, with the freeway's mainline elevated over arterial cross streets.

When construction of the mainline freeway began early this year, all Pecos Road traffic was shifted to the eastbound lanes for a period of approximately two years. Two lanes of traffic in each direction are maintained at most times during construction, with the exception of periodic traffic restrictions at intersections with cross streets.

Meanwhile, construction continues on the I-10 Papago, Salt River and Pecos segments.

Once freeway construction is complete in the Pecos segment, traffic using the interim road (two lanes in each direction) will be moved to freeway lanes in the final stages of construction. The South Mountain Freeway will open to through traffic when work is complete on all segments.

In addition to the early phase 1 construction, crews started taking inventory of native plants along the Pecos Road right of way that could be removed, stored, maintained and eventually replanted in their permanent locations upon completion of roadway segments. Salvageable plants were relocated to a temporary nursery.

The new freeway will provide a much-needed and long sought after alternative to Interstate 10 through downtown Phoenix. It was approved by Maricopa County voters in 1985 and again in 2004 as part of a comprehensive regional transportation plan.

Major traffic impacts are expected, but Arizona Department of Transportation and Connect 202 Partners will strive to keep traffic moving during construction of the South Mountain Freeway. They will take precautions to reduce the impact of construction and accommodate local traffic.

However, they advise motorists in the construction area to sign up for traffic alerts at www.Southmountainfreeway.com, allow extra time, slowdown in construction work zones and plan ahead.—CEG