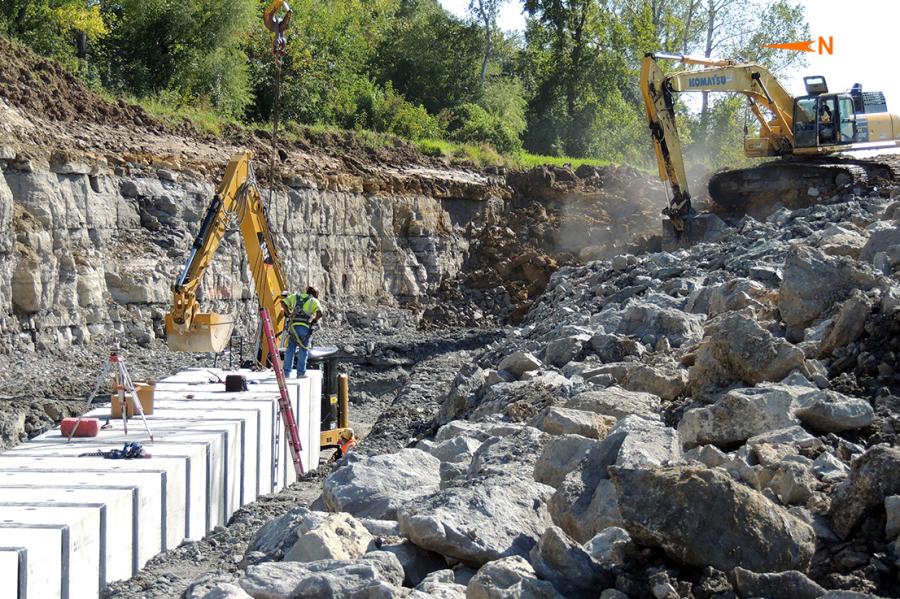 Kansas Department of Transportation (KDOT) officials are marking completion of Phase II of the state's largest-ever highway project. Final cleanup is taking place on Johnson County Gateway Phase II, which has been under construction for more than two years at the convergence of Interstates 35 and 435 and K-10.

“This is the biggest project we've ever done, twice as big as the last one, and it gives our folks an opportunity to work on something big,” said Paul Gripka, KDOT project director. “We have field guys who have been here for 10 to 15 years, and some for whom this is their first year with us. This lets us prepare for the future.”

“KDOT sees this design-build project as a way to maximize efficiencies because designers are working hand-in-hand with the contractors. They're not just working in a black box. They know what each contractor's abilities are, and can tailor the design to match his abilities to construct the thing.”

The JoCo Gateway Interchange is considered a critical hub for both transportation and economic growth for the region and the state. Currently, permanent pavement striping is taking place on Phase II, along with seeding and sodding. Crews also are adding and updating lighting, but the elements are a concern.

“Cold weather is impacting our final striping right now, but we've been fortunate to have had such a mild fall this year,” said Gripka. “Too much rain early in the project impacted our schedule, as we couldn't grade or excavate because it was too muddy. We were able to get back on track after some long stretches of nice Midwestern summers.”

A key task on the high-profile project has involved utilities.

“We had several municipalities and utility companies with various levels of mapping for their older work,” said Gripka. “Multiple utility moves were needed prior to the start of work, and utility strikes were a concern.”

KDOT and the project management consultant team from HNTB collaborated with Gateway Interchange Constructors, the design-builders who constructed the complex expansion project. GIC is a joint venture led by Kansas City, Missouri-based Clarkson Construction Co., which partnered with Kiewit Infrastructure Co. Other members of the team included design firms HDR Engineering and George Butler Associates. As part of the design-build method, the team worked under a single contract with the project owner to provide both design and construction services.

For the I-35 and I-435 flyover ramps, weathered steel girders were used, a virtually a maintenance-free option for the varying Kansas seasons. More than 14 mi. (22.5 km) of drainage pipe was installed, along with 6.8 million sq. ft. (6.3 million sq m) of new pavement installed and 56 mi. (90 km) of new lanes were added.

Prior to the start of Phase II, the area highways needed additional capacity to handle traffic. The interstate pavement also was at the end of its useful life, so much of the project pavement was replaced. Two new diverging diamond interchanges were constructed to handle added traffic and high volumes of left turns at the interchange locations.

Gripka said working in an environment with drivers nearby was extremely challenging.

“A construction site has its own potential dangers, but having work next to live traffic moving at high rates of speed, even with the reduced speed limits in place for construction zones, adds an additional level of concern.”

As much as 4.7 million cu. yds. (3.5 million cu m) of earth had to be moved during construction. Equipment used on the job included L-B crawler cranes, manlifts, D5-D9 dozers, Hitachi and John Deere excavators, Caterpillar loaders, hoes, skid loaders, motor patrols, compactors and scrapers and Gomaco 2800 and 9500 pavers. Cranes were necessary for bridge construction, as well as moving and removing girders.

“It's the first and largest design-build transportation project ever completed in the state, and it was completed in just 2.5 years. Generally, motorists are pleased. Overall, there have been very few complaints during the entire construction project,” said Gripka,

“There were multiple changes and closures happening on a daily basis. Motorists and area businesses handled them well. Our proactive communication approach provided information early, so people could make informed travel decisions.

“Communication with the public played an important role in the success of the project. Overall, the traveling public had several ways to stay informed about road and ramp closures and the communications team worked closely with area businesses and communities to get the information to them, so they could help disseminate it.”

For the Johnson County Gateway project there were two public meetings and electronic outreach, including a website with a blog, online surveys, focus groups, community presentations and media relations. Briefings and workshops were also held.

As work on the project wraps up, Gripka can breath a sigh of relief.

“It's very rewarding. Seeing traffic flow smoothly during rush hours, when it used to slow down considerably is a mark of success because no one likes to be stuck in traffic.”

In 2011, a concept study was completed to create a framework and priorities for improvement in the area. Stakeholder engagement set a foundation for communication during the project's construction. To keep from being overwhelmed, those involved made certain not to get ahead of themselves.

“It meant taking things one step at a time and looking ahead to see what big things were coming in order to plan for it,” said Gripka. “Lots of communication and coordination kept everything moving forward.

“While it has been a lot of work in a relatively short period of time, there is still Phase III of work to complete the ultimate improvements for the entire interchange.”

Phase I was substantially completed in December 2012, adding two additional lanes running in each direction along I-35 from 119th Street to I-435. In April 2014, officials broke ground on Phase II. In November 2016, local, state and federal officials turned out in Lexexa for the official ribbon cutting, celebrating the milestone on the complex project.

“The Gateway project will be a means of improved travel for tens of thousands of commuters,”Gov. Sam Brownback told reporters. “With the addition of 56 new highway lane miles and more than 27 new and rehabbed bridges, the project provides a conduit for increased economic development, safe travel and the movement of freight.”

“The design-build contracting approach allows states to deliver projects more quickly and more cost-effectively,” said David S. Kim, FHWA deputy administrator. “Through our Every Day Counts initiative, the FHWA encourages innovations such as design build that save time and money for U.S. taxpayers.”

Richard Carlson, acting transportation secretary said, “With the number of vehicles expected to grow to 380,000 by 2040, drivers will now experience commutes with improved efficiency, decreased travel delays and safer travel through the I-435/I-35/K-10 interchange.”

The Johnson County Gateway I-435/I-35/K-10 interchange is considered one of the most congested in the entire state. Accident rates are above the statewide average, and the existing pavement needed to be replaced. Improvements are expected to reduce congestion and boost safety in the area.

The project is already supported through TWORKS, KDOT's 10-year comprehensive transportation plan. The city of Lenexa and the city of Olathe contributed money to help include the College Boulevard, the Ridgeview Road and K-10 interchange, Renner Boulevard and the 95th Street and I-35 interchange improvements.

The economic impact during the past three years of construction for the area is estimated to be almost $4 million. In addition, the economic benefit for the state is expected to add more than 1,000 permanent jobs, resulting in an extra $48 million annually to improve access to new markets and encouraging new development opportunities. By 2020, twenty percent of all new jobs in Kansas will be in Johnson County, as growth within the county continues.

The westbound collector-distributor (C-D) road and the Lackman Road ramps were one of the last pieces to be completed and opened to traffic in mid-November. The Lackman Road on- and off-ramps are now accessible via the new C-D road.

The Johnson County Gateway Phase II project included reconstruction and capacity improvements within the project area along I-435 from U.S. 69 to 95th Street, K-10 and Ridgeview Road to I-435 and I-35 from 95th Street to south of I-435.

As part of the Phase II construction work, the existing westbound ramps at Lackman Road were reconstructed and now connect to the westbound C-D road. A new westbound I-435 exit ramp to Lackman Road also was added. College Boulevard from Renner Boulevard to Ridgeview Road was widened to four lanes in 2015.

One key aspect of the project was minimizing impacts to the traveling public by reducing closure durations and maintaining three through lanes of traffic on the interstates during the peak travel times in the morning and evening. GIC was able to maintain traffic throughout the project area, while completing the work on time. Commuters will now experience open lanes throughout the project area, along with improved access to city streets, and two-lane flyover ramps at the I-435 and I-35 and K-10 and I-435 interchanges.

In spring 2017, additional seeding, sodding and pavement marking work will take place, but the project is virtually complete. Phase II provides substantial improvements for the project area, but does not address all the traffic concerns identified through 2040. Phase III implements the additional traffic improvements needed; however, there is no current schedule for construction or funding.