With traffic now whizzing across its shiny replacement, the 61-year-old Tappan Zee Bridge is being painstakingly dismantled in a process that will stretch into 2019. 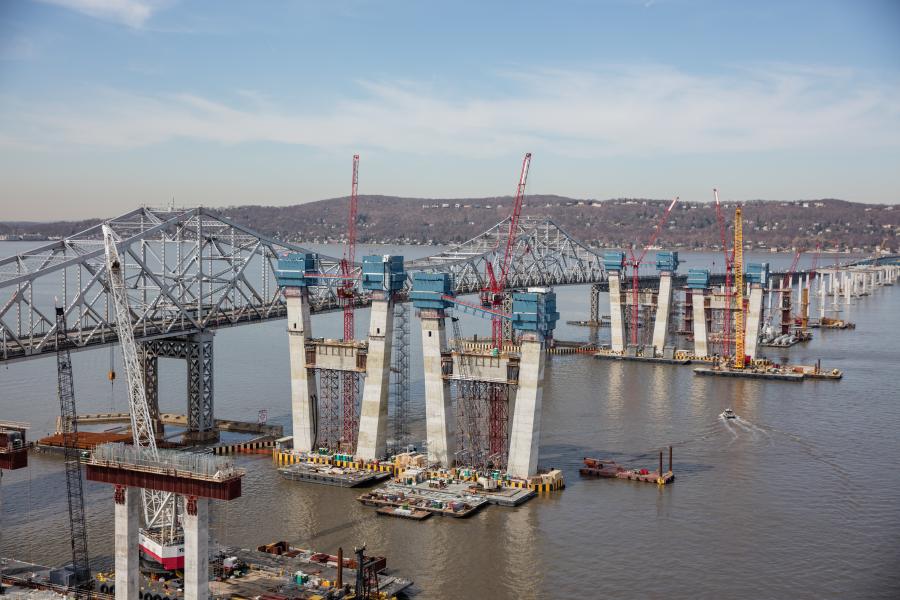 Steel and concrete panels that were once part of a mighty bridge that carried 50 million vehicles a year across the Hudson River north of New York City will find new life spanning streams along sleepy country roads.

Steel and concrete panels that were once part of a mighty bridge that carried 50 million vehicles a year across the Hudson River north of New York City will find new life spanning streams along sleepy country roads.

With traffic now whizzing across its shiny replacement, the 61-year-old Tappan Zee Bridge is being painstakingly dismantled in a process that will stretch into 2019. Barges haul sections upriver to Albany and downriver to Perth Amboy, N.J., where ground-up concrete will be sold for highway construction and steel will be melted down and recycled.

Some pieces of the old bridge will escape the crushers and furnaces and be trucked to upstate towns looking to save thousands of dollars on their own bridge projects. Those parts include some of the 2,000 steel-and-concrete deck panels. New York's Thruway Authority offered 150 to local governments for the bargain price of $1 apiece when the Tappan Zee project began four years ago, but only 135 met specific local requirements were spoken for. The demolition contractor will disassemble and peddle the rest.

“We're estimating it will save us about $100,000 per bridge,” said Jim Dougan, deputy public works superintendent in northern New York's Essex County, which may build up to five bridges with the dozen pre-fab panels it requested. “For a county with about 38,000 residents, that's pretty important.”

Seven other counties also requested some of the 50-ft. (15-m)-long deck panels, which are still considered to have plenty of life in them since they were part of a major upgrade of the bridge that was done from 2007 to 2011.

Essex County's plans include using two panels to span a creek along a gravel road in the tiny hamlet of Ironville, a national historic district near Lake Champlain that bills itself as the “Birthplace of the Electric Age.” In 1831, an electromagnet now housed in the Smithsonian was used to pull iron from ore there.

“We don't have specific locations for them,” said that county's highway superintendent, Don Higgins. “We just want to have them in stock when something comes up.”

While reusing panels from big projects like the Tappan Zee is uncommon, it's not unheard of. Allegany County, along the Pennsylvania border, got 33 panels from Boston's infamous “Big Dig,” a highway and tunnel megaproject completed in 2007. Public Works Superintendent Guy James said the county has put in for six Tappan Zee panels, which will likely be used to replace bridges along dirt or gravel roads.

“The Tappan Zee had 140,000 vehicles per day,” James said. “Here, the panels will go on roads that might have 100 cars a day. They should serve the rural population very well.”

James was hesitant to take the panels at first because of their weight — 43 tons (39 t).

“We'll have to make sure our bridge supports can handle them,” he said.

But he foresees no problem trucking the panels to the county's construction stockpile.

In most cases, people will never know they're driving over a segment of the famous Tappan Zee Bridge connecting suburban Rockland and Westchester counties 25 mi. north of New York City.

But in some places, they will.

Chemung County Supervisor Tom Santulli envisions a sign or plaque identifying panels that may be used to replace several bridges over a meandering trout stream.

“It's kind of neat to have pieces of the Tappan Zee,” Santulli said. “It's a piece of history; when they built it, it was quite a feat.”