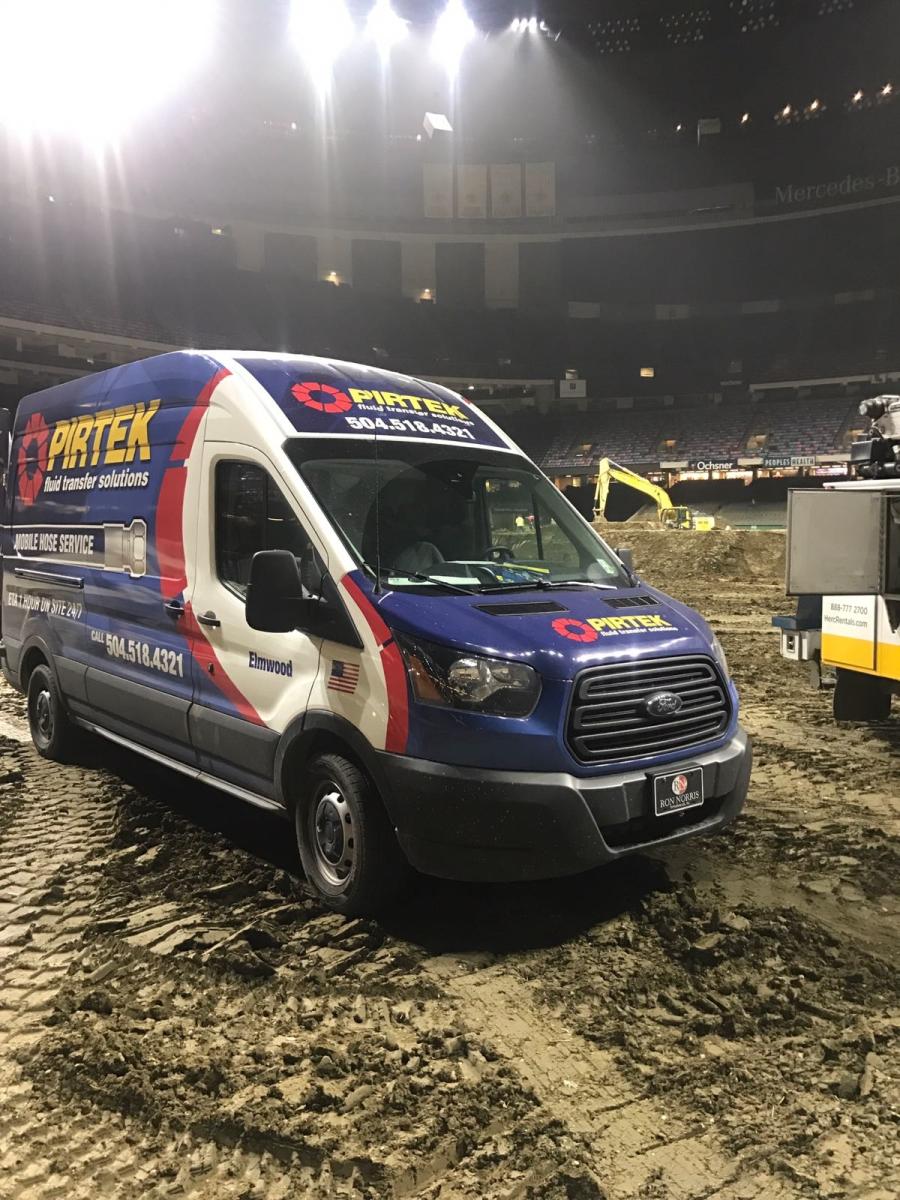 Recently, a front-end loader blew a hose while preparing ground for a New Orleans Monster Jam competition in the Mercedes-Benz Superdome. That’s when PIRTEK got into the act.

Thousands pack stadiums to hear the roar of monster trucks as they launch themselves up ramps and crash with demolishing force onto the unfortunate vehicles below. To make the event more fun, the ground is prepared to a precise sogginess so tires can sling mud everywhere.

Recently, a front-end loader blew a hose while preparing ground for a New Orleans Monster Jam competition in the Mercedes-Benz Superdome. That's when PIRTEK got into the act.

"It was an interesting chain of events," said Carl Prince, owner of PIRTEK Elmwood in Harahan, La. "I'm happy we could help them out." PIRTEK Elmwood, which opened in July 2016, sits in a spacious industrial park about 10 minutes from the New Orleans city limits.

The customer was Herc Rentals, a company Prince had been approaching for business over the course of several months. Up to that point, PIRTEK Elmwood had yet to perform a job for them. But on Jan. 26, Prince received a call out of the blue: The company needed a PIRTEK technician at the Superdome, right away. The competition was looming and they had an idled Caterpillar front-end loader. It required a hose and fittings to get moving again.

The PIRTEK Elmwood Mobile Service Vehicle drove into the Superdome right over the spongy earth that was being prepared for the monster trucks. "The driver wondered if he might get stuck," Prince said. "But it was OK, he didn't have a problem."

The technician made it to the venue in 30 minutes. The equipment was up and running in less than an hour. PIRTEK Elmwood was also on standby that weekend to service any other hose issues that might arise. "Since doing that job, we've performed three more for Herc Rentals," Prince said. "It was a good opportunity for us."

A Florida native, Prince has lived in the New Orleans area 27 years. Before opening the PIRTEK franchise, he worked with a supply company that had helped area companies manage their inventories during Hurricane Katrina and the BP oil spill.

Since PIRTEK Elmwood opened its doors, Prince has pursued business from the oil market, port and marine companies, petrochemical plants and the manufacturing sector. But the job in the Superdome, he said, was one of the most interesting to date.

"It gave the guys something to talk about," Prince said.