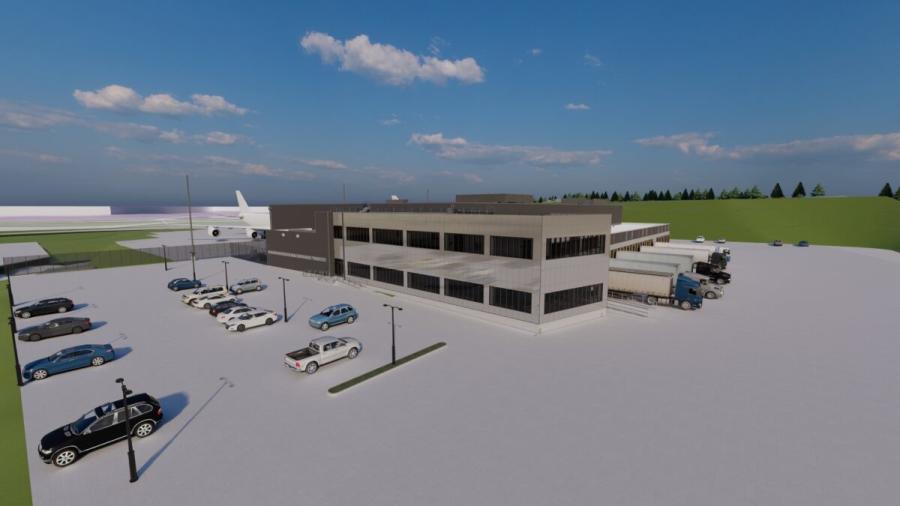 Pittsburgh International Airport's burgeoning cargo business is triggering a building boom at the facility 10 mi. west of the city.

PIT is preparing to erect the largest cargo building in its history after experiencing its busiest year for freight since 2004.

The new facility will be one of two new cargo buildings under development at the airport in the wake of a year that saw a surge in e-commerce and international shipments during the pandemic.

Bryan Dietz, senior vice president of air service and commercial development, told the Post-Gazette recently that the airport is making the commitments to ensure that it will have the capacity to meet future needs.

He explained that PIT is seeing "robust demand, and we're at capacity in many of our buildings."

Aeroterm Inc. was selected through a request for proposals to develop the facilities at Pittsburgh. The Annapolis, Md.-based company has expertise in constructing cargo buildings at airports.

Board members with the Allegheny County Airport Authority (ACAA), which oversees PIT, approved a ground lease Feb. 18 to clear the way for the development.

The largest of the new airport cargo buildings, to be approximately 140,000 sq. ft., will be constructed by Aeroterm on up to 8.77 acres of land.

Dietz noted the facility will be built behind the Airside Business Park on a plot of land that once was part of the old 1950s-era airport terminal in Moon Township that was demolished after the midfield complex opened in 1992.

"It's a great reuse of the past that's going to set us up for the future," he added.

The Post-Gazette reported that PIT hopes to have the facility open by the second quarter of 2023.

ACAA board members approved the Aeroterm lease after another strong month for cargo at PIT in January, when overall volume was up 14 percent compared to the same month in 2021.

While the building can be used for a variety of cargo purposes, Dietz said it is expected it will end up serving international freight.

"It does not have to be just for international air cargo, but that likely will be its greatest use because that's where we see growth coming from," he explained to the Pittsburgh newspaper.

Qatar Airways, which first launched twice-weekly cargo service in Pittsburgh in 2017, now has up to three or four flights a week.

Until recently, Cathay Pacific Airways had been operating twice weekly flights between Hanoi, Vietnam and Pittsburgh, with a stop at its cargo hub in Hong Kong.

That flight currently is suspended because of issues in Hong Kong, but Dietz said other carriers are picking up some of the freight that normally would be hauled by Cathay Pacific.

The latest Aeroterm building will supplement another new facility totaling nearly 80,000 sq. ft. under development by the ACAA.

The second structure, funded with the help of an $18.69 million federal grant, will include warehouse, office space, and 17 loading docks capable of handling any cargo plane flying today, the Post-Gazette reported.

Scheduled to open in 2024, the facility also will be able to segregate cargo and accommodate goods that are temperature controlled or sensitive.

The two new buildings will add to the airport's four existing cargo buildings and two others that have been converted for that use because of growing demand. The biggest current building is 70,800-sq.-ft. in size.

Dietz said constructing both new facilities will help the airport in its drive to become a major international cargo center.

The Post-Gazette noted that experts have said Pittsburgh is benefiting from congestion at major cargo hubs in New York, Chicago, Boston and Los Angeles as carriers look for alternative airports to unload their goods.

Another key factor in the cargo surge, according to the Pittsburgh news source, has been e-commerce behemoth Amazon Air, which launched service to the western Pennsylvania airport with a daily flight last May.

Since then, it has added another daily flight and risen to become the airport's third largest cargo carrier, though it trails PIT's biggest haulers, FedEx and UPS, by a substantial margin in terms of volume.

"We're expecting to see air cargo growing," explained Dietz. "We're competing globally for business, [and] watching the supply chain closely so that we can continue to support the industry where it's needed. For us, the building's more than four walls and a roof. It's enabling a new part of the Pittsburgh economy."