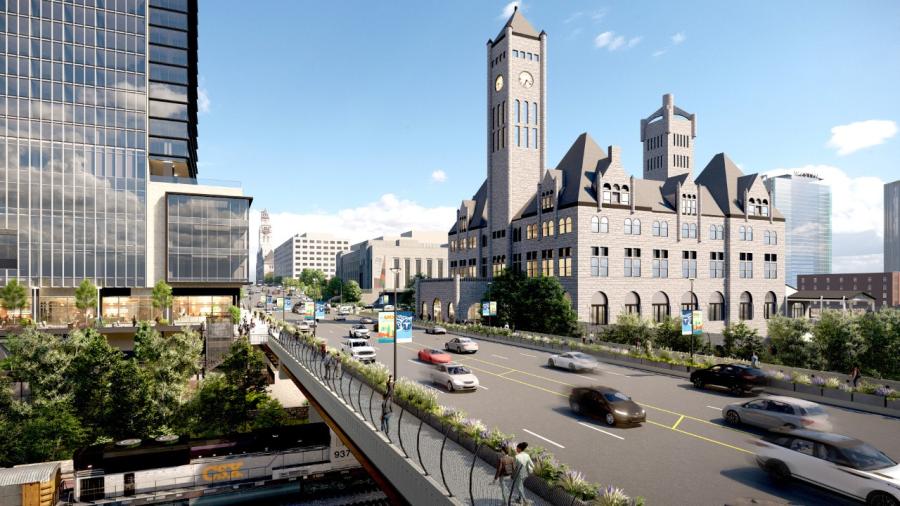 The project along State Route 1 (U.S. 431) consists of replacing the bridge, also known as the Broadway Viaduct, that crosses over 11th Avenue and the CSX Railroad in downtown Nashville. (Rendering courtesy of Tennessee Department of Transportation)

The Tennessee Department of Transportation (TDOT) is ready to begin demolition and construction on the Broadway Bridge in downtown Nashville following months of planning by the agency, the Tennessean reported Jan. 20.

The project along Tennessee Highway 1/U.S. 431 consists of replacing the bridge that crosses over 11th Avenue and the CSX Railroad. New renderings released Jan. 19 by TDOT show six lanes of traffic and added protection for pedestrians.

Known as the Broadway Viaduct, the existing structure was opened in 1948, but is now showing signs of deterioration, according to the agency.

Traffic on Broadway will soon be shifted to four lanes until June before the bridge is completely shuttered from July 5 to Sept. 1. TDOT plans to detour all vehicles onto Church Street and Demonbreun Street during the eight-week closure.

All work on the viaduct is expected to be complete by October.

New Bridge Will Not Include Bike Lane

Planning for the bridge replacement construction in the Music City began last spring, and stakeholders provided feedback after early designs were presented, according to the Tennessean.

TDOT noted on its website that the replacement structure will remain on the same alignment and have the same general width as the existing structure.

It, too, will be made up of steel girders and support columns. The new roadway also will provide six 10-ft. travel lanes, along with an 8-ft.-wide striped median with 1-ft.-wide shoulders, curb and gutter, and 11-ft. 8-in. sidewalks, which will include space for aesthetic features like planters on both sides of the roadway.

According to the transportation department, though, there was not enough space to include a protected bike lane in the modern design as the emphasis was on keeping six lanes for car and truck traffic.

TDOT refers to Broadway as "an urban principal arterial" in Nashville.

The viaduct project is located along the heavily traveled Broadway corridor, an important route to traffic flow in and out of downtown Nashville on the west side of the Cumberland River. It is also close to the Tennessee capital city's many developments, historic sites, and active CSX rail lines.