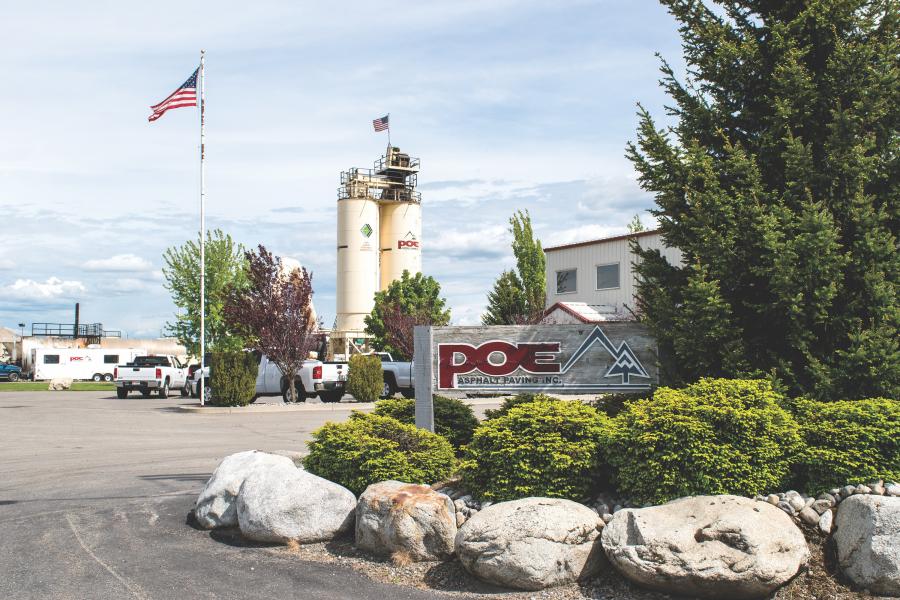 Poe Asphalt Paving has offices in Lewiston and Post Falls, Idaho, as well as in Pullman, Wash. In addition to asphalt plants at those sites, the company has another permanent facility in Grangeville, Idaho, and runs a portable operation.

Poe Asphalt Paving marks its 65th anniversary this year as the company's history dates back to 1953 when Ernie Poe and Kenny Knapp formed a firm known simply as Asphalt Paving in Clarkston, Wash. Today, Poe Asphalt Paving has multiple locations that cover a significant portion of the Pacific Northwest and is led by third- and fourth-generation members of the Poe family.

“It almost didn't make it past five years,” said Mark Poe, Ernie's grandson and current President. “Grandpa was going to sell to Kenny in the early 1960s, but for whatever reason that didn't happen. My dad, Don, was a teacher at the time, and Grandpa asked him if he wanted to come home during a summer break and see what the business was about.”

Instead, in 1962, Ernie and Don bought Knapp's share of the business and officially named the company Poe Asphalt Paving Inc. Don took over the reins shortly thereafter and ran the business for nearly 30 years before handing them off to Mark in the mid-1990s.

Today, the company has offices in Lewiston and Post Falls, Idaho, as well as in Pullman, Wash. In addition to asphalt plants at those sites, Poe Asphalt Paving has a facility in Grangeville, Idaho, and runs a portable operation.

“The first year that Grandpa and Dad were in business, they laid approximately 4,500 tons of hot mix together with just five employees,” shared Mark. “They had a small batch plant and a couple of end dumps. Things steadily grew from there, in part, because they were willing to take chances. For instance, within seven years they were doing highway work with portable plants. That's a big step, and most companies don't do it that quickly, if at all.”

More big moves followed. Under Don's leadership, Poe Asphalt bought one of the first drum mix plants in the area in the late 1970s. When Mark took over, he added another plant, office and shop in Post Falls in 2000. That location reaches the Greater Spokane, Wash., and Coeur d'Alene, Idaho, markets as well.

“The decision to move an additional plant up north has been positive. We've built a good core group of employees who are both experienced and dedicated,” Mark noted.

Mark's sons, Brian and Dustin, represent the fourth generation in the business. Brian is a Division Manager and takes care of estimating, project management and other administrative duties. As a Superintendent, Dustin runs field operations.

“They offer a nice balance to the business,” Mark noted. “Dustin enjoys leading crews, and he's an extremely good teacher. Brian has a real gift for numbers, seeing jobs through from start to finish and meeting budgets. My dad and I worked alongside each other, just as he and grandpa did for many years. It's great to carry on that tradition.”

The company's workload is approximately 65 percent public works contracts, such as highways and streets for the states, counties and municipalities in northern Idaho and eastern Washington. The balance is split between private and commercial activities; including driveways, parking lots, subdivision roadways and more.

Poe Asphalt Paving typically runs one large job at a time. Recent projects include paving nearly 2.5 miles of asphalt on U.S. Highway 95 near Coeur D'Alene. Crews laid roughly 25,000 tons of material, 12 to 14 feet wide. Additionally, during a couple of weeks in late May of this year, Poe put down about 700 tons of material for a new parking lot, bus lane and playground at Liberty Creek School in Liberty Lake, Wash.

“Occasionally we have two big projects going at once, but for the most part we roll from one big job to the next,” explained Dustin. “At the same time, we're also doing smaller paves, patches and chip seals. Our season runs from around March 1 to the first or second week of December, and we generally complete about 200 varying-sized projects in that 10-month stretch.”

For larger assignments, such as Highway 95, Poe Asphalt utilizes a Highway Class, 10-foot Vögele Super 2000-3i that will pave up to 28 feet, 3 inches wide. Poe uses Carlson screeds that allow for attachments such as slope shoes, extensions and dual skis.

“We demoed other brands along with the Vögeles, and they were all good, but after a trip to the Wirtgen Group factory in Tennessee where they manufacture the Vögele pavers, we decided these were the best for us,” recalled Dustin. “They are built to be tough, sturdy and to put down hundreds of thousands of tons of material without major breakdowns. Asphalt is abrasive, so it's hard on equipment. In our estimation, a good paver can withstand that and last 10 years while running a million tons through it. We believe the Vögeles will do just that.”

The Wirtgen Group sent an Applications Specialist to help train Poe Asphalt personnel on the machines. Modern Machinery provides further support with parts and service as needed for the pavers.

“Nathan, Wirtgen and Modern have been terrific to work with,” noted Mark. “They ensured that we have the right pavers to meet our needs, and that they would back them. They have more than met our expectations.”

“We appreciate the relationship our two companies continue to build,” said Modern Machinery President Brian Sheridan. “As with all our customers, we're here to help Poe Asphalt in any way we can.”

The Poes know that the Vögele pavers will help them continue putting down solid asphalt mats that often lead to honors such as the High Quality Asphalt Pavement Construction Award it received from the Washington Department of Transportation for the U.S. 195 project it completed from Colfax to Dry Creek in 2013. The Washington Asphalt Paving Association gave Poe Asphalt Paving its Smoothness Award for another job on U.S. 195, this one from the Idaho state line to Colton.

“Quality is extremely important to us; not because of the awards, but because it leads to more durable and better-driving roads for the general public, as well as smoother and longer-lasting parking lots and driveways for our customers,” said Brian Poe. “That and providing outstanding customer service are our top priorities. Dad and Grandpa always stressed that to Dustin and me, and we take it to heart.”

That focus has led to many satisfied and repeat clients throughout the family's six decades in the asphalt business.

Mark pointed out that he spoke with a customer recently who said he uses Poe Asphalt for three distinct reasons, “ You guys bring our projects in on time, on budget and always provide solutions to our problems.”

“That's the goal of every project we build. I think Grandpa would be extremely proud to know that we are in our fourth generation and continuing the quality work and values he started,” Mark explained.

(This story was reprinted with permission from Modern Machinery's Update Magazine, August 2017 issue.)