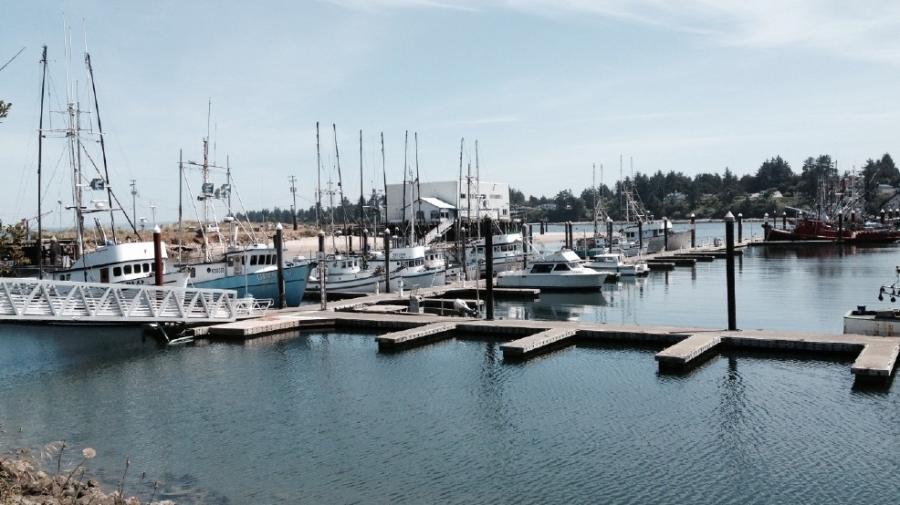 “This city, this bay was built on shipping. It's a valuable resource,” Mike Dunning, the Port's director of maritime operations, told Coos Bay city councilors. “One of the important numbers to think about is 1986: we had almost 400 vessel calls a year, [now] we are down to 50.”

The project would involve dredging the current channel and deepening it 8 ft. along more than 8 mi. of river, beginning near Roseburg Forest Products. The same stretch west of the McCullough Bridge would likewise be widened 150 ft.

A 1,400-ft.-long by 1,100-ft.-wide “vessel-turning basin” also would be created at the upper end of the proposed modification.

Those numbers would change to 45-ft. deep by 450-ft. wide at the project's conclusion.

If completed, the work would be the largest and deepest dredging project in Coos Bay's history.

Dunning argued the modifications are necessary to stay relevant in an evolving market.

“We want to build a robust shipping port in Coos Bay but ships are getting bigger,” he said, adding that ports like Los Angeles and Charleston, S.C., were already dredging to make their channels more than 50 ft. deep.

According to Dunning, the larger ships do have a benefit however, they can carry more product.

“It makes us more competitive [with bigger ports],” he said.

And while Coos Bay will never operate at the same level as behemoths like Long Beach and Los Angeles, there is still a niche for the largest deep-water channel between San Francisco and Puget Sound.

“[The logging industry] is not really going to be our concentration [for shipping],” Dunning said, explaining that the target was bulked goods. “Maybe boutique containers, potentially some small containerized vessels — we don't ever really see ourselves being a large container port.”

Dunning noted that Coos Bay is optimally located for trade with Asia and other international markets and possesses a comprehensive multimodal transportation network that included rail, highway, maritime and air.

He said the Port operated rail network would benefit greatly from the influx of cargo.

According to the Port's Finance and Administration report, rail operations earned less revenue than planned in January of this year.

The report blamed lower volume and less cargo for the rail's weakness and estimated the Port would fall short of an estimated $286,000 additional surplus for the year to date because of the rail's consistent underperformance.

“To maintain that rail and maintain all the bridges and structures we have on that system, we have to get more than 7,500 cars,” Dunning said. “That's the reality and we do that by increasing our shipping.”

On May 2, Coos Bay City Councilor Phil Marler said he recognized the importance of a well-maintained rail system in relation to imports and exports but called on the Port and its partners to consider the wear and tear on surrounding highways that will come from increased trade.

“I think about that accident in Scottsburg,” he said, referencing a semi-truck crash that shut down bridge traffic for several days in April. “It really concerns me about the state of that bridge and sections of that highway. We all have to look 20 years down the road, not tomorrow.”

Dunning assured the council that road and highway health was a priority and that the Port is required to work with Oregon Department of Transportation.

Port officials said the project also will help foster development of 1,000 acres of Port-owned property on the North Spit.

Dunning said the land could be converted into a multi-use terminal.

“We have a gem here when it comes to shipping,” he added. “There's not a lot of greenfield or brownfield property ready to build on the West Coast with deep water access like Coos Bay. It really is a gem.”

When asked by The World if Jordan Cove or its parent companies, Veresen and Pembina Pipeline Corp., would be beneficiaries of the work, Dunning said a variety of parties stood to gain from the presence of a vibrant port.

At the moment, the Port is working collaboratively with the state and “various private partners” to fund the project.

While Dunning would not comment on Jordan Cove's involvement with the project, he did say, “there have been discussions” between the port and the energy company.

The process to modify Coos Bay's channel has spanned more than a decade and will take at least the better half of another before completed.

Beginning in 2006, the Port began preliminary design and studies for a terminal and deepening the channel. Since then, Port officials have worked with the U.S. Army Corps of Engineers and consultants to evaluate and analyze methods.

In 2016, the Port submitted tentatively selected plans to the Corps and expects to submit draft reports and a draft of an environmental impact statement by the end of this year.

The Corps will then evaluate and scope the draft EIS as part of the National Environmental Policy Act. At that time, the public will be able to provide input through meetings and other opportunities.

If approved by the Corps and public, permits will be issued in 2019 before construction begins sometime that next year.

Port officials say they hope construction would then be completed by 2022.

But as Dunning noted, there is still much to be done.