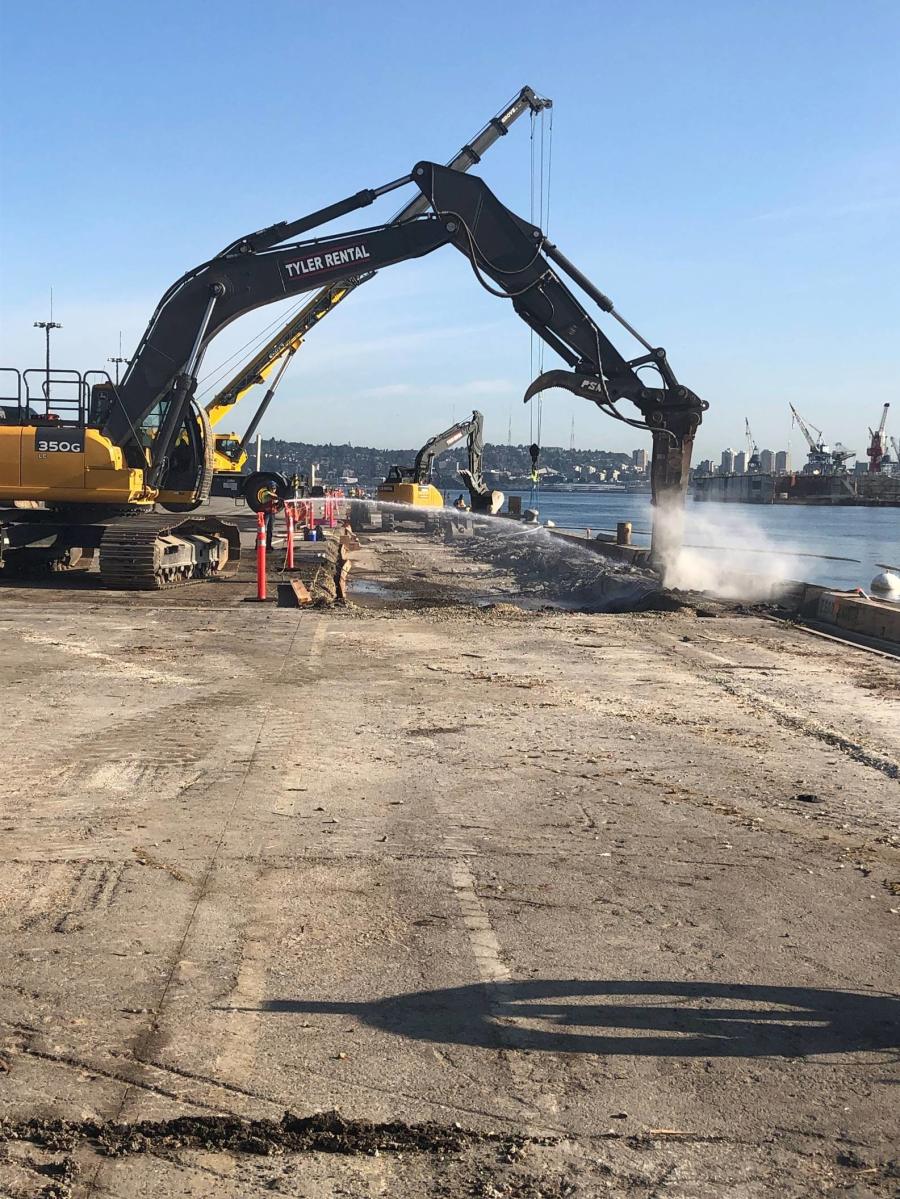 In the first phase of the project crews are demolishing the bollards, tendering, bull rail and some of the decking and ballast, working off barges and from on land.

After several years of planning and community outreach, a nearly $500 million project to modernize the existing Terminal 5 at the Port of Seattle is underway. Terminal 5, made up of 185 acres, has not been in use since 2014. This project is part of a larger overhaul taking place in the Puget Sound terminal area. 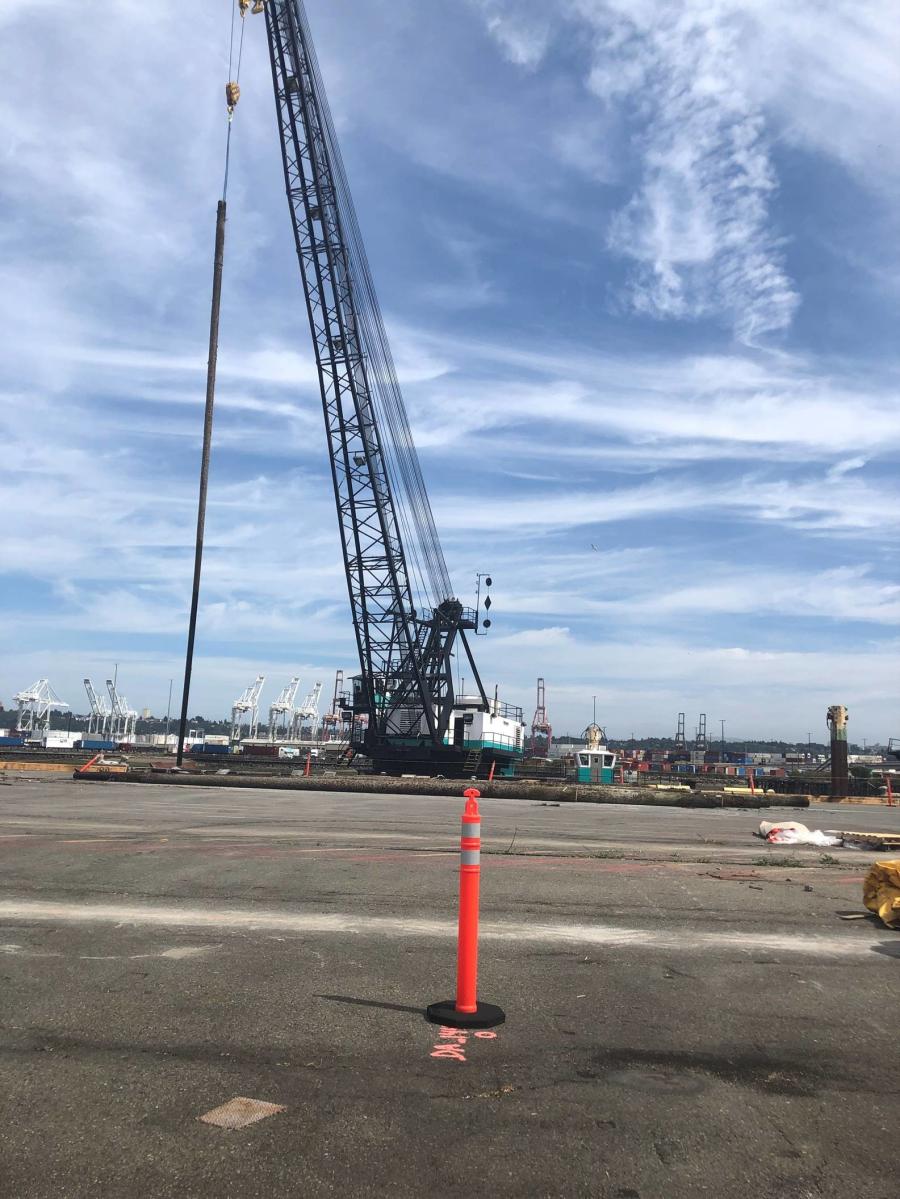 "The modernization is so it can handle larger and larger cranes," said Anne Porter, Seaport Project management director for the Port of Seattle. "The industry continues to use larger and larger vessels, which has triggered dramatic changes in the container shipping in recent years. With the largest marine cargo vessels entering the trans-Pacific trade, our Terminal 5 investments are critical for Washington state exports to Asian markets, in addition to growing cargo volumes and maritime jobs in the Puget Sound region."

"The average vessel 10 years ago was 7,000 TEU (twenty-foot equipment unit)," said Port of Seattle spokesperson Peter McGraw. "Today that number is 14,000 and growing. The goal is to be able to handle one 18,000 TEU and one smaller, but larger class, vessel."

The project comes under the auspices of the Northwest Seaport Alliance, a joint entity of the Port of Seattle and Tacoma Port Development Authority. The contract was awarded to Orion Marine Group, headquartered in Houston. The Stevedore Services of America (SSA) has committed $160 million to the project for the cranes.

"Terminal 5 in Seattle has long been considered a premier container cargo on the West Coast because of its naturally deep berth, wide footprint and the availability of an on-dock railyard, which allows containers to be directly loaded from the ship onto rail lines," said Porter.

"The new ultra-large container ships, however, require larger, heavier cranes with a longer reach, which in turn requires strengthening the dock and upgrading utilities.

"In addition to these infrastructure improvements, Seattle and Tacoma port commissioners have directed staff to bring forward environmental investments to enhance water and air quality for the community. They include updating stormwater treatment systems and installing ‘shore power' infrastructure, which allows a vessel to plug into electricity while at berth, substantially reducing air emissions," Porter continued. "The plan also includes technology improvements to manage truck flow around the terminal and a railroad ‘quiet zone' to reduce noise impacts for the surrounding community." 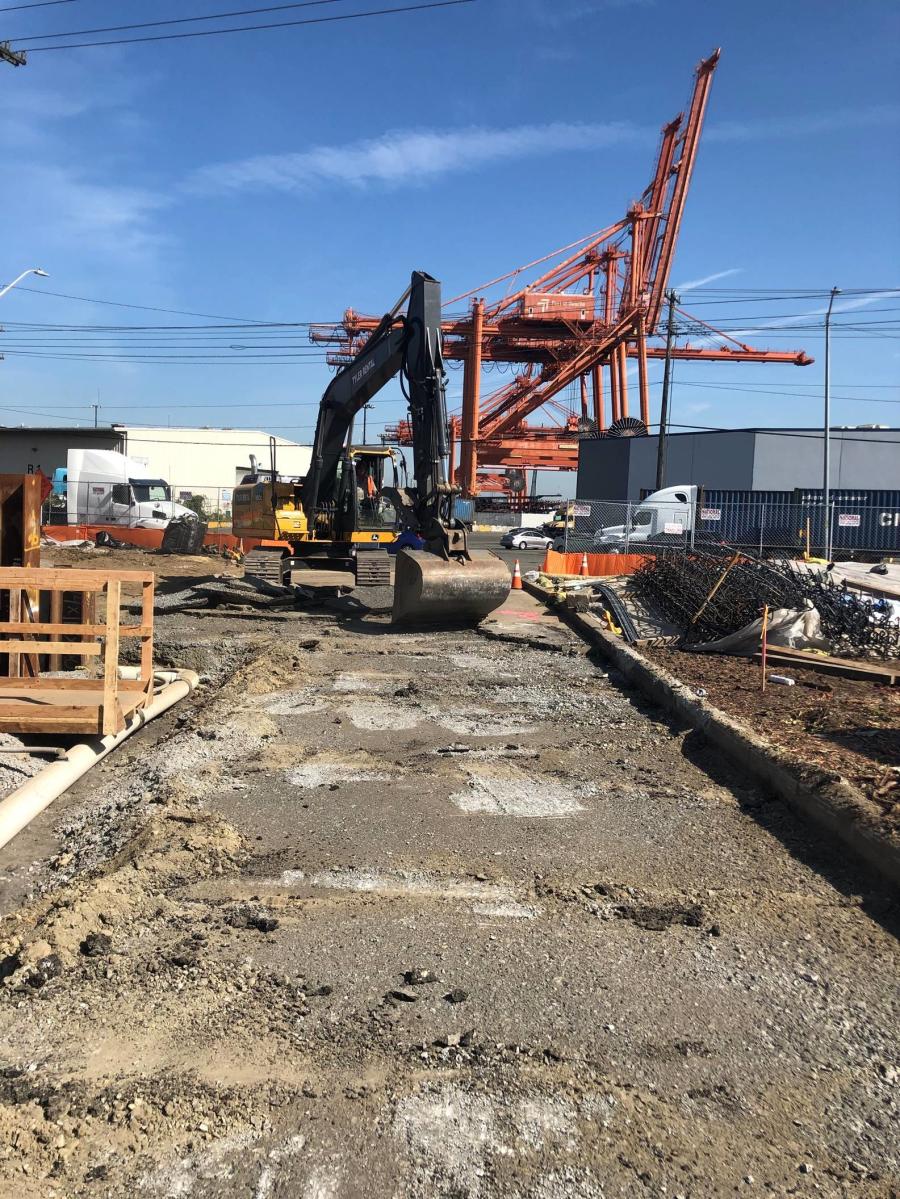 The project broke ground in July 2019. In the first phase of the project crews are demolishing the bollards, tendering, bull rail and some of the decking and ballast, working off barges and from on land. They also are driving new and deeper piles Once completed, phase one will include new electrical infrastructure with a new primary substation, crane rails, bollards, fendering and an underwater toe wall.

New cranes will be placed on the north dock during phase two of the project. Phase two also will involve demolishing and reconstruction of the southern part of the dock. When completed, the south dock also will have a new underwater toe wall, crane rails, bollards and fendering. Dredging of both the north and south berths will take place once phase two is complete.

Because the port is so close to residential areas, the Port of Seattle worked closely with the community to mitigate factors that would interrupt daily life.

"We met regularly at scheduled community organization meetings, neighborhood councils, community groups, Chambers of Commerce," McGraw said. "We'd go and present to them our plans and then we would host open houses as well. We displayed images of what the terminal would look like and the structures involved. Been doing that for the past couple of years at least."

One major challenge is negating noise. To that end, the Port has restricted the hours for pile driving, and require construction equipment to use low-frequency back-up alarms.

"They're pretty noisy," Porter said. "That will wake you up at night. Other challenges we've faced include running into unknown site conditions. When we're driving pile, they can run into obstruction in the sediment. They either have to relocate the pile or cut it. And we can only work in the water six months of the year because of salmon migration. We try to avoid the season the juvenile salmon are migrating, so we're not allowed to do in-water work, between Feb. 15 and Aug. 15."

Phase one of the project is set to be completed by 2021 with phase two slated to be finished in 2023. CEG