Construction companies work hard to deliver a state-of-the-art school facility to the students of an overcrowded school district. 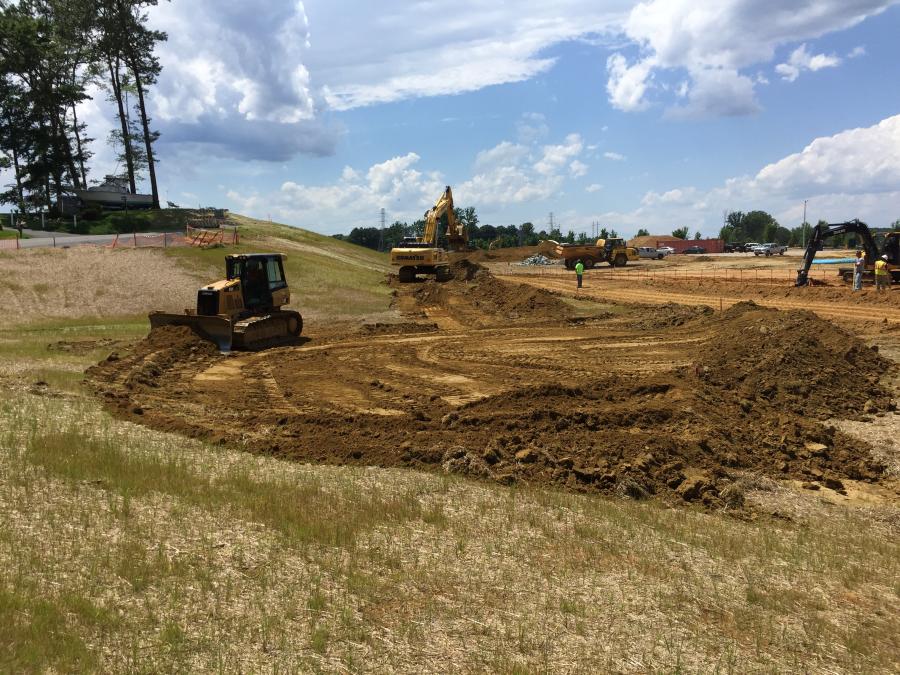 In an effort to help relieve overcrowding within the Prince William County system, a new elementary school is being built in Dumfries,Va. Dubbed “Potomac Shores” until an official name is selected, the 19-acre project has not been without its issues early on.

“We rarely, if ever, have a site that does not pose a unique challenge,” said Steven Walts, superintendent of Prince William County Public Schools. “While it is quite level now, that is not the way the Potomac Shores site started out. Solutions to such challenges require the school division's construction team to work very closely with the civil engineers in planning the site, the architects in designing the structure and the contractors in building the school.”

The district has not yet been set for the new school, which will house roughly 850 students K-5.

“The project is coming along nicely, thanks to the weather,” said Ron Whitten, principal. “It will be an honor and privilege to welcome students and parents to this state-of-the-art school.”

“There is a shortage of seats in this area for elementary school students. Prince William County Schools builds per our capital improvement plan. During the creation of this plan, housing projections are taken into account. This was the time slated to construct this facility.”

Thompson said modern technology is a key feature of the new structure.

“The school will be equipped with interactive white boards, WiFi, and an up-to-date LAN data system. The target completion date of this facility will be in time to occupy the 2017/2018 school year.”

The groundbreaking ceremony featuring remarks by superintendent Walts, other school officials and invited guests took place in May. The school is roughly 40 percent complete.

The new elementary school will include a computer lab, an art room, music room, science lab, story room and a cafeteria and stage for dining, physical education and large group assembly. The plans also call for an activities room for physical education, small group activities and community use, a media center for reading and audio/visual production and an administration area including general reception, administrative offices, a workroom, record storage and a faculty lounge.

The construction bid cost of the new facility was $20.8 million. The funds will be furnished thru the sale of bonds. Specifically, construction is possible through the cooperation of the Prince William Board of County Supervisors and funding received from general obligation bonds via the Virginia Public School Authority.

“The biggest challenge for any school project is the schedule,” said Pavone. “Although not always the case, the majority of the school sites have adequate room to stage and perform the work; however, they are generally on a very tight construction schedule. The school system sets their delivery dates for furniture, as well as their dates to register the new student body a year in advance of the opening. We have to be sure to have the facility ready when these tasks are scheduled. The fact is that the students are coming on the date scheduled and the facility has to be ready.”

Pavone said the concerns with building an elementary school are similar to those of most any new structure.

“The facility has to be safe during construction, as well as after it is occupied by the owner. Employing proper construction methods to ensure that the facility is structurally sound is the primary concern. After that, it's a matter of managing the building systems and finishes and the subcontractors performing the work.”

Foundations and slabs are complete. The bearing walls and steel joist and deck are underway. All of the roof system have to be installed as well as interior walls, systems and finishes. Completion of paving and landscaping also remains.

Equipment being used on the job includes excavators, skid steers, forklifts, a crane and concrete pumps. Some of the main materials being incorporated are concrete, block, brick, stone and typical building finishes such as acoustical ceiling, vinyl tile and carpet.

“The building is an approximately 105,000 square feet two-story masonry wall-bearing structure with a combination PVC and standing seam metal roof,” said Pavone. “The exterior façade is a combination of stone, brick veneer and metal panels. The facility houses a combination of classrooms, administration areas, kitchen, cafeteria, gymnasium and multipurpose rooms. The only additional structure on site is a small masonry storage building.”

Managing subcontractors and maintaining schedules is the most time-consuming part of construction.

“The industry suffered through the last recession, and the manpower has not rebounded at the same pace as the work,” Pavone said. “Schedules are becoming more compressed, and we are performing the work with fewer men.”

According to Jim McCalla, AIA, vice president of Moseley Architects, “Potomac Shores Elementary School is based on a prototype elementary design by Moseley Architects for Prince William County that originated with Triangle Elementary School and T. Clay Wood Elementary. The original vision for the school was to provide an outstanding educational facility for the communities that these schools serve — Triangle being a replacement school for an aging, existing facility, and T. Clay Wood serving a growing part of the county on a site shared with the new Patriot High School.

“The only real challenge for this project was helping the school system to keep up with the rapid growth that they are continuing to experience.”

McCalla said his firm has a long association with Prince William Country Schools, which is always helpful when starting a new project.

“Utilizing a prototype design, especially one that was designed for that specific client, allows for the incorporation of those lessons learned directly from the previous generations of that prototype, as well as allowing for Prince William County Public Schools to benefit from a reduced design fee for work already completed. We are continuing the relationship with Prince William County Schools to provide excellent facilities for the students, staff, and community that this school serves.

“The building is a partial steel construction and load- bearing masonry with brick veneer. The layout is partial single-story for the higher ceiling requirement of the public spaces, such as dining, gymnasium, media center, etc., and a partial two-story academic wing.”

Located 30 mi. (48.3 km) south of Washington, D.C., Potomac Shores covers 1,920 acres and features almost two miles of shoreline on the Potomac River, 1,000 acres of preserved hardwood forests and streams and a new Jack Nicklaus Signature Golf Course. The development will offer a mixed-use town center, a new VRE commuter rail station, a planned marina and waterfront village, a resort hotel and a corporate campus. In addition to offering nearby schools, the development will include a private recreation center, multiple sports fields, a network of trails and more than 3,800 residences.

According to Joe Aguirre, SunCal spokesman, the elementary school and a middle school are both part of the development.

“Our company began collaborating with the district in 2014 to develop the Potomac Shores Elementary School site. We graded and prepared a 19-acre site, and delivered it to the district in April.”

St. John Paul The Great Catholic High School also is located within the community. Opening its doors in 2008, it has been a significant motivator for many of the homebuyers in their decision to live at Potomac Shores.

“The construction is making great progress,” said Aguirre. “Potomac Shores Elementary School is planned to support 900 students, many of them residents of the Potomac Shores community. It's wonderful to have a brand new school as part of the fabric of our growing community.”

The planning and permitting for the project was completed in August 2015. Earth-moving operations started in February with steady progress made, despite a blizzard that affected the East Coast. SunCal was charged with delivering a completely prepared pad site to the Prince William County School system, so that building construction could then begin. More than 130,000 cu. yds. (99392 cu m) of fill dirt was moved early on to prepare the building pads.

Aguirre said nearly 300 homes have been sold and occupied, and more homes are under construction with an average price of nearly $700,000. Home building in the southern half of the project will begin early next year, and will include a section by Brookfield Homes. The town homes directly adjacent to the golf course will be under construction by mid-summer, and they will be built by the Pulte Group.

In all, there are more than 1,200 lots either already delivered to builders or under development. Construction is also underway for a sports complex, to be named after local Olympic athlete Ali Krieger, that will feature seven playing fields and a concession stand that will be dedicated to the county.

Much of the 228-acre town center land has been cleared and is being graded in preparation for development. The first commercial pads will be ready by the summer of 2017. By early 2018, a substantial portion of the main parkway into the town center will be complete, opening a large area for commercial development. The community also recently opened the 13,000 sq. ft. (1,207 sq m) Shores Club, a private recreation and fitness complex.

“It's a great convenience to our residents to have schools situated within the community, and we are pleased to be working closely with the Prince William County Public Schools District,” said Aguirre. CEG