Construction crews began their work in late fall, with the date for substantial completion scheduled for mid-February 2019. 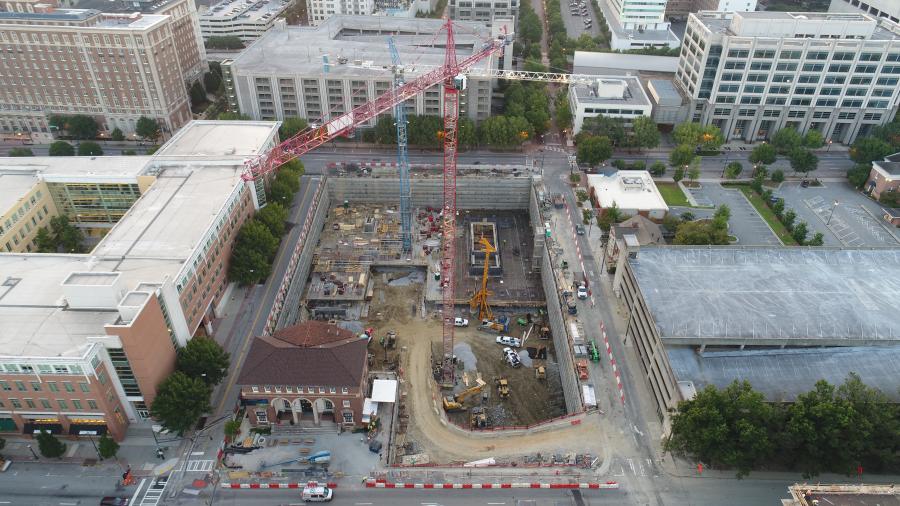 In Atlanta, Ga., construction continues on a $375 million mixed-use project that will mesh research with commercialization. When it opens in 2019, Coda at Tech Square will provide 770,000 sq. ft., of office, retail and technological areas, positioning the city as a major tech hub. (DPR Construction photo)

In Atlanta, Ga., construction continues on a $375 million mixed-use project that will mesh research with commercialization. When it opens in 2019, Coda at Tech Square will provide 770,000 sq. ft., of office, retail and technological areas, positioning the city as a major tech hub.

"Coda is a unique development, and is part of Portman's vision to advance Midtown Atlanta as a leading national location for technology and innovation," said Hunter Richardson, executive vice president of development, Portman Holdings. "With each construction milestone, we get more excited about the potential for this development to add more energy to this part of the city."

With five levels of underground parking, the high-profile endeavor has required a mass excavation of 160,000 cu. yds. of dirt, so far. This amounts to 16,000 dump truck loads of soil hauled off, which, if lined back-to-back, would stretch from Atlanta to Macon. Because of the extraordinary amount of dirt moved and approximately 90,000 man hours invested, officials held a "bottoming out" ceremony to mark the end of this phase of construction.

"Our team and the many stakeholders who are making Coda a reality came together to acknowledge the hard work done to date, and to remind each other of just how transformative this development really is," said Richardson. "This was the inflection point when we transitioned from excavation to vertical construction. We are now building up toward an even more vibrant future for Midtown Atlanta."

According to Georgia Institute of Technology president G.P. "Bud" Peterson, "Since it first opened 13 years ago, Technology Square in Midtown Atlanta has rapidly become one of the leading regional innovation hubs in the southeastern United States. Tech Square promotes and facilitates innovation and collaboration between businesses and industry and the Georgia Tech community."

The school will be the anchor tenant, occupying approximately half the 620,000 sq. ft. of office space. Portman Holdings owns the tower, with John Portman & Associates designing the facility.

"Coda, which includes a high performance computing center, will take innovation to a whole new level," said Peterson. "This iconic building developed by Portman Holdings will become a magnet for corporations and startups alike, while serving as a state-of-the-art resource for breakthrough research. This new facility will help propel the region and Midtown Atlanta as one of the leading innovation ecosystems in the Southeast and the nation."

In December 2016, hundreds gathered for a ceremony to celebrate the formal start of construction for the 21-story office tower, which will have close proximity to MARTA and major highways. The structure is located near Atlanta arteries I-85, I-75, Hwy 78, Spring Street and West Peachtree Street NW.

Targeted for LEED-Platinum certification by the U.S. Green Building Council, Coda will incorporate a number of unique green features, including twin stack elevators and chilled beams that will help with temperature control, and the use of recaptured grey water to cool the computer center. The design includes the creation of an outdoor urban plaza bordered by retail and a giant interactive media wall, a high performance data center and two office towers connected by a central collaborative core.

The collaborative core will be a gathering space connecting every floor from top to bottom. The design represents the "next generation of office space," and will serve as a landmark for the city of Atlanta.

"We believe innovation is generated by looking at things in a different way," said Pierluca Maffey, vice president of design of John Portman & Associates. "So we are creating spaces that allow brilliant thinkers, creative minds and smart business people to come together, share their points of view and start a process that leads to the next big idea."

Tech Square is considered an ideal location for tech startups and university spinoffs. The area has attracted industry innovation centers that include AT&T Mobility, Panasonic Automotive, Southern Company, Delta Air Lines, The Home Depot, Coca-Cola Enterprises, NCR and ThyssenKrupp Elevator Americas. Along with the new NCR world headquarters under development and Tech Square Labs, the eight-block Tech Square campus will soon total three million square feet of commercial space and more than $1 billion invested. The mixed-use development will serve as an urban "main street" for the campus and community.

DPR Construction was hired to build Coda, which will occupy an entire city block, and include a unique preservation of the historic Crum & Forster building. DPR will clean and restore the 1927 exterior, while transforming its interior as restaurant and entertainment space.

"We always preach that 'you don't know what you don't know', and there are a lot of unknowns involved with excavating a city block down five floors," said Tom Montanye, DPR project manager. "Overcoming and adapting to these unknowns has presented the biggest challenges to the project, so far."

Montanye noted that existing utilities have been a concern, as well as soil conditions both on site and off site (within the boundaries of the shoring wall tie-back system), along with the location of rock and quality of rock and how quickly crews can draw down the water table.

Construction crews began their work in late fall, with the date for substantial completion scheduled for mid-February 2019.

"Prior to breaking ground, it was important to have all existing utilities removed from the project," said Montanye. "This included water lines, gas lines, power poles and communication lines. We are excavating from property line to property line, so any utilities remaining when we put the first shovel in the ground will impact the overall project schedule. Next, we cleared the site, began to install the h-piles for our shoring system and installed the perimeter well points to begin drawing down the water table.

"We started with 42 perimeter well points and later added eight inbound well points to help speed up the draw down of the water table. We have averaged over 50 GPM from the site since we broke ground in November. We utilized a top down construction shoring wall system. This allows us to construct the permanent retaining walls simultaneously with the mass excavation activities. When we reach the bottom of the excavation, our permanent walls are in place, and we are ready to begin the structure."

According to Montanye, the first step in the shoring wall construction was to install the soldier piles that support the horizontal lagging on the wall.

Dealing with the elements has been another consideration,

"Weather is always a factor, especially when you spend eight months digging a hole," said Montanye. "One benefit to your site being a giant hole in the ground is that it greatly simplifies your erosion control measures. Water flows downhill, so, in our case, that's into the site and not off of the site. The drawback is that in a major rain event, the site can quickly become over-saturated. It's important to know when inclement weather is coming, and properly prepare your site.

"You have to make sure you have established low points with active pumps installed in those locations. We can't control when it rains, but we can prepare our site to handle the weather and hopefully limit the schedule impact to a single-day weather event."

A variety of heavy equipment is on site to carry out the many tasks required to build Coda.

"We've had a fleet of excavators throughout the project," said Montanye. "The bulk of the mass excavation was performed by two John Deere 470 excavators. These are large excavators that are built for moving large quantities of dirt. They come equipped with a four-yard bucket, which allows them to easily fill a dump truck with three scoops."

The Bauer BG 42 was utilized for both shoring wall construction and the drilled shafts of the deep foundations. In addition, soil nailing/tie-back rigs have been necessary for the soil nails on the shoring wall system. There are two tower cranes on site, as well as geo tech rigs, dozers, hydraulic pumps and rock drilling rigs used to drill holes for the dynamite/rock removal.

"To date, we have basically excavated the hole. Now we have the building to construct."

Two small buildings on site were torn down by the ownership before crews broke ground. Enormous amounts of soil and rock have been removed, with 190 piles driven. Enough water has already been pumped out of the site to fill a 3/4 in. garden hose nearly reaching the moon and back.

As the high-profile project moves forward, city officials are touting it as a prime example of how the city is cementing its reputation as a tech hub. Dr. Eloisa Klementich, president and CEO of Invest Atlanta, said the local technology sector is expanding rapidly.

"Since the beginning of 2016, the city has facilitated more than 6,000 new technology jobs, and over $600 million of investment through technology company relocations and expansions," said Klementich. "Coda gives Atlanta another major asset to attract technology companies to the city, and will strengthen our position as a global destination for technology. Anchored by Georgia Tech, it will establish Atlanta as a place where companies from around the world want to come for collaborative research between industry and academia.

"Coda will help to accelerate job growth within Atlanta's innovation and entrepreneur space, creating approximately 2,400 jobs once the center is operational. Companies and startups in rapidly growing sectors of technology, such as fintech, health IT, Internet of Things and mobile, will have a dynamic, world-class environment for research, development and commercialization of new technologies within the center.

"From its early days as a railroad destination, Atlanta has always been a city where people come with new ideas and a spirit of innovation, said Klementich. "We are excited about the combination of students, professors and companies coming together in this facility to create and build breakthrough technologies here in Atlanta that will shape the future.

"We're proud to be working side-by-side with leaders in government, academia and the private sector on this unique project that will have an estimated economic impact of $813.8 million during the next 20 years. The opportunity for synergy between businesses and the university will facilitate research through commercialization, a new model for technology innovation used in technology centers across the world."

"The Portman team is honored to bring to life the vision for this mixed-use property at Tech Square, unlike anything else in the southeastern United States," said Ambrish Baisiwala, CEO of Portman Holdings. "We're excited to develop Coda — encompassing collaborative office space, co-working and research facilities, a high performance computing center and interactive community space, collectively enhancing the innovation ecosystem created by Georgia Tech and Midtown."