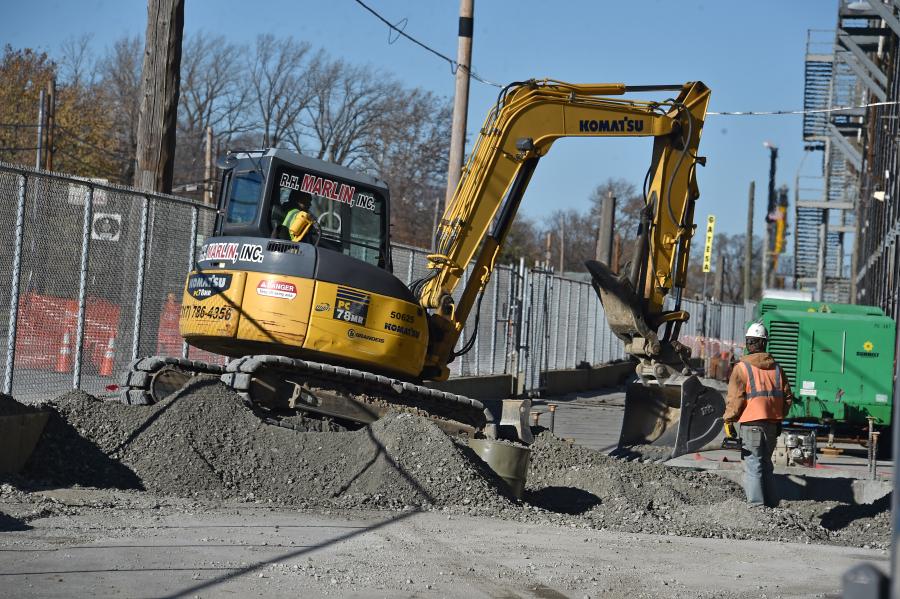 Instead of replacing it, the project will involve renovating within the existing footprint.

In preparation for a colossal celebration to commemorate the 100th running of the 500-mi. race at the Indianapolis Motor Speedway in 2016, Project 100 was launched to install upgrades and updates at the famous race track.

Instead of replacing it, the project will involve renovating within the existing footprint. To make sure the changes don't change everything, Jonathan Hess, the Indianapolis-based architect who designed the pagoda, media center, trackside garages and pagoda plaza that debuted in 2000, was chosen to guide the project. Even with his experience at the famed oval, Hess, president of Browning Day Mullins Dierdorf Architects, said it's a delicate balance to move IMS forward while staying true to its structural past.

Ensuring that modern updates and technology don't ruin the historic feel has been a struggle as IMS goes through the makeover, said Boles. Built in 1909, the Speedway is a unique place where every feature represents a direct link to a moment frozen in time, a memory shared by passionate fans. Alterations to this sentimental space always create controversy.

Nevertheless, alterations are periodically necessary. When the track was built in the early 20th century, its primary purpose was as an automotive research and development facility. Spectator amenities were at a minimum.

Although amenities have been added over the years, the Speedway is still continually refreshed to keep up with technology and improvements in fan accommodations.

Project 100 is a major capital improvement initiative planned to coincide with — and is aptly named for — the 100th running of the Indy 500. The goal is to create fan-focused experiences and entertainment options.

Phase 1, which was completed in May 2014, focused on renovations of the road course. Phase 2, which wrapped up this past May, consisted of installation of the new scoring pylon and video boards. But it's Phase 3 that Boles thinks the fans will notice most.

Phase 3 kicked in after the last race of 2015. This $50 million portion of the overall $90 million Project 100 budget includes renovation of seating along the front stretch (Paddock Penthouse, A and B Penthouses), the installation of new track fencing and an upgrade to Gate 1 at 16th and Georgetown.

A new roof structure will be built across Paddock Penthouse, A Penthouse and B Penthouse that allows for three additional rows of prime seating. “The roof will be 17 feet higher,” Boles said.

The roof is being raised to comply with the Americans with Disabilities Act. The stands were originally built before ADA, but had to be upgraded accordingly during this renovation. “It's a complicated process,” said Boles, “We had to remove three rows, which displaced ticket holders, so we raised the roof to accommodate them. People hold onto the same seats for generations. We didn't want them to lose ‘dad's seats.'”

Six new elevators will provide access to these penthouses for the first time. Boles said six new staircases that are wider and less steep are also being constructed.

The roof structure on E Penthouse will remain unchanged, but like the other penthouses along the upper deck of the front stretch and through Turn 1, it will benefit from new stadium seating with cup holders that will replace the aluminum benches and folding chairs.

“These seats are in the highest demand,” Boles said, and command the highest price; therefore, he considers it appropriate that they provide a premium experience, with some of the best views available, thanks in part to the removal of columns and posts that obstruct the sightlines from A and B Penthouses. “Half the posts were 24 feet with an overhang; the other half were half that size.”

A new mesh fence will further enhance visibility. “Visibility is improved,” Boles said. “It feels more transparent.” While the 500,000 square feet [12 acres' worth] of new mesh fence is the same gauge, it has smaller openings and a black coating that's easier to see through, won't rust and can be replaced seamlessly if it gets damaged. Boles said it's the same fencing used at other race tracks in the United States. Approximately $3 million is being spent on the external fence.

Additional new seating will come at the expense of 27 suites. The Hulman Terrace Club will offer 1,200 club seats. “We're turning terrace suites into club suites,” Boles said. “The Hulman Club suites will seat 6 to 8 people, not 80 like the old suites.” The larger corporate suites cost $100,000, whereas the new suites will carry a probable cost of around $2,000 per year, offering a new level of service that Boles views as a middle ground between the best regular seats and the high-priced suites.

Amenities for the new option will include a bar on the upper level. “We envision this area would be available to small corporations or individuals interested in more than just a normal IMS seat experience.”

Although Project 100 doesn't signify the number of smaller projects being undertaken, there are a number of other changes underway. All components of Project 100 were identified and prioritized back in 2012 and 2013, based on how they impact the fan experience.

Most of them consist of technology upgrades and creature comforts. “We're adding Wi-Fi and making improvements in the concession stands and restrooms,” Boles said.

The Gate 1 entry will be enlarged and enhanced for improved ingress and better photo opportunities. Inside, there will be more green space and areas for fans to gather. A plaza in the roundabout outside the Turn 1 entrance will feature a wing-shaped art structure, bricks and accents in Speedway green (commonly known as forest green). Other entrances along Georgetown Road will also get new signs and landscaping.

Work on Gate 1 won't start until after New Year's Day, but the rest is underway. Warm, dry fall weather has benefited the schedule, but abating lead paint and asbestos was a costly hit in both time and money. Crews also had to wait while electrical lines were relocated to the west side of the track.

By Thanksgiving, all the demolition on the upper decks was complete and some crews were busy putting up steel. “There are about 90 on site today for the grandstand project,” Boles said, “with another 25 hanging fence, painting posts and putting up 38 miles of cable.”

He hoped to have the fence done by Christmas. Because work on the Hulman suites is indoors, weather isn't expected to impact the winter schedule much. Nevertheless, Boles said he's nervous because “I lose a day every day.”

The strict five-month timeline leaves no room for error. Boles is right to be nervous when surprises add to the workload. In addition to discovering lead and asbestos, he said they found “a lot of things that needed repair” in Paddock Penthouse. A contingency fund covered the cost, but there are no extra days in the budget.

Even more work might be added if seats are replaced in the lower portions of the grandstands, increasing the number of new seats to 86,000.

Three massive cranes have been spotted at the famous Brickyard. “One had a special jib for the project to enable it to reach over electrical lines to remove seats and the roof deck,” Boles said.

The upper deck was built in phases in the 1960s and has an industrial reinforced steel roofline. The new roof requires 1,200 tons (1,088.6 t) of steel, with an additional 47 tons (42 t) of steel for reinforcing on the lower level.

Materials are being reused or at least recycled as much as possible. “We reused everything from the road course,” Boles said. Concrete curbing was used around the infield lake for erosion control; asphalt was remixed and reused on the track. Two linear miles of aluminum grandstands from the front stretch have been saved to repurpose later. Some materials will be sold as scrap for recycling, some put into the fans' hands. “It's the right thing to do.”

It's also right to use Indiana companies as much as possible. It's tradition; the original bricks laid in 1909 came from an Indiana company. Boles said it's also part of the agreement made in procuring funding through $90 million in bond issues in this private-public partnership. “We agreed to use Indiana unions and local companies if possible. It creates stories, like the bricks.” Due to specialized criteria for the mesh and video boards, which few companies can provide, he says the “lowest best bids” won.

The fence mesh is manufactured in New Paris, a small Indiana town, by Merchants Metals. Another company in Muncie supplied the steel beams for the roof. General contractor Hunt Construction and structural engineering company Fink, Roberts & Petrie are both based in Indianapolis. Michael Browning, chairman of Visit Indy, is coordinating the vendors.

Looking Back, Thinking Ahead

Despite the upgrades in technology and amenities targeted to improve the fan experience, Project 100 is all about preserving the history that makes IMS unique. “We don't want to change the characteristics of what makes it special: the history,” Boles said. “It's a balancing act to add modern amenities, but make it feel like it's still the Speedway. We want to assure fans that we haven't changed what's most important.”

Hess, president of Browning Day Mullins Dierdorf Architects, another Indianapolis-based firm, wants to make sure of that. As he considered updates to the historic venue, he weighed various structural solutions from the past — in particular, the work of George Fink and other engineers from the 1930s to 1940s — and tried to “bring that forward in a way that carries on the tradition, but makes it new. “If we do our job correctly, you should be able to squint and see everything of the historical sense of the place and you should be able to appreciate that it's moving forward in a facility sense as well.”

Modernizing the century-old facility while giving a nod to history isn't easy. Hess explains the origins of the facility as a test track, with little thought given to spectator seating and other amenities.

Stand A is even older, dating to the track's opening in 1909 as the first grandstand. The current version was built in 1951; it was remodeled in 1989 and renovated a decade later.

Stand B is the track's second grandstand, originally built in 1910. The current version was built in 1954 and renovated in 2003.

Adding a new roof to an old structure that is 5/8th of a mi. long is challenging. Hess speculates that it's the longest piece of architecture he's worked on. “It's a tough engineering and aesthetic problem.”

It's important to remember that it's not about the architect. “Here, it's about two and a half miles, and it's about fitting it and being contextual,” Hess acknowledges.

Boles knows it will look different, but believes it will still look like the old Speedway. “We think the elements are really going to tie together to give it that industrial feel we expect of the Speedway.” The fans wouldn't accept anything less.