The South Shore/Jackson Park golf course project remains nameless, but its layout is no longer a mystery. 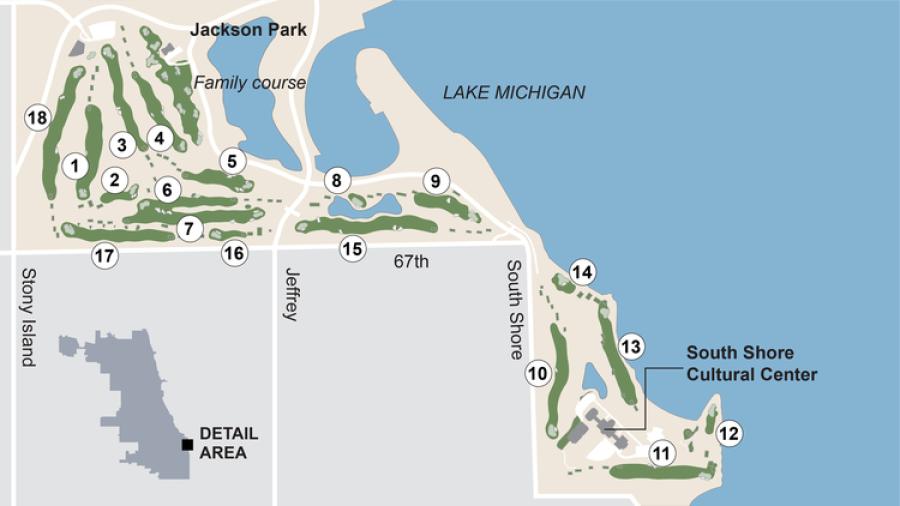 The layout of the par-70 course. (Chicago Tribune photo)

The South Shore/Jackson Park golf course project remains nameless, but its layout is no longer a mystery.

The 7,354-yard, par-70 course was unveiled Wednesday evening (June 21) at the South Shore Cultural Center, where community members and golf enthusiasts eyed a plan that could redefine golf in Chicago.

Mark Rolfing, the NBC/Golf Channel analyst spearheading the plan, said that as recently as early 2016, he was skeptical of a project that requires coordination among the community, the city, the Chicago Park District, the Western Golf Association and the First Tee of Greater Chicago.

Other challenges include dealing with lakefront erosion, constructing costly underpasses and raising tens of millions of dollars so green fees can remain affordable for loyal players of the decaying Jackson Park and South Shore courses.

"It's an incredibly complicated puzzle," Rolfing said. "The puzzle has been solved, from our viewpoint."

"We believe in catering the golf experience to a wide swath of people — juniors, elderly, avid players, not-so-avid players," Welling said. "One of Tiger's tenets is playability. How can we bring more people out to the golf course and allow them to have fun?"

Ciji Henderson, president of the Chicago Women's Golf Club, said she believes in the project "because it is something that the city truly desires and needs."

"We've been here when the bunkers were filled with water and you really couldn't play," Henderson said. "Being an avid golfer in this community, we deserve it."

Jackson Park is the home base for the club of African-American women, and Henderson hopes the new course will remain affordable and accessible for her group. She also hopes golf carts will be permitted.

The routing does not include cart paths as organizers hope players will choose to walk and support the caddie program. But the cart issue remains unsettled.

Here are 10 more things to know about the proposed course, which organizers hope will open in 2020:

• Holes 12-14 will have the million-dollar views, with No. 13 sandwiched by two par-3s. The 13th will play 362 yards for mortals, but if the course gets a BMW Championship (aiming for 2021) or Presidents Cup, players would hit their tee shots over the public beach, stretching the hole to 543 yards.

"We asked ourselves: How can we maximize the experience on the lake?" Welling said. "The holes are going to be absolutely spectacular. (No.) 12 will have a peninsula green, water right, left and long, with a marquee snapshot of downtown Chicago. And it could be windy."

• Lake Michigan should be in view from a half-dozen holes, and others will play along the Jackson Park Harbor. A recontoured lake will swallow balls short of the par-3 eighth green.

• The design has five par-3s and three par-5s because that's what suited the land. Welling has worked with Woods since designing a practice range and putting course in 2005 at the Tiger Woods Learning Center in Anaheim, Calif.

"It's very much Tiger Woods," Welling said of the Chicago routing. "He is very passionate about golf design and gets very involved. He has definite ideas about what he wants to accomplish, and I view my job as being a conduit to take his ideas and filter that into (the plan)."

• The course will have a "parkland" feel with about two to three bunkers per hole and trees lining the perimeter but also generous fairways and medium to large greens. The current nine-hole South Shore course has gotten so overgrown that its fairways are narrower than Oakmont's and its greens are smaller than Pebble Beach's. Designers are determined to make this course playable for the average golfer.

"One of the things Tiger believes in strongly is width (of fairways)," Welling said. "Width makes it way more playable, keeps speed of play flowing. And it's more fun. Who wants to lose a golf ball? I don't care if you're wealthy or not, no one likes to lose a golf ball.

"(Wider fairways) allows us to create hazards and bunkering to get that better player to have to make a decision off the tee. Tiger is an analytical guy: He wants to get people using their brain."

• The plan is to have six sets of tees, including a kid-friendly routing of 2,989 yards. Youngsters and players looking for a warm-up or quick loop can play a family short course of six holes to be constructed next to Jackson Park's Cecil Partee clubhouse.

• That 100-year-old clubhouse will be renovated as a family golf center with indoor simulators, putting greens and classrooms for First Tee of Greater Chicago programming. Neighborhood residents pushed hard for a facility that would provide year-round access.

• Designers have left room for grandstands and spectator corridors in hopes of impressing the PGA Tour and Western Golf Association, which run the BMW Championship. Hospitality areas could be located in the South Shore Cultural Center, which otherwise will remain a space for community theater and art galleries, or the nearby Barack Obama Presidential Center.

• The main clubhouse will be large enough to house 70 lockers, which would be needed for a limited-field PGA Tour event such as the BMW. But if you're looking for grandiose, go to Medinah. This will have a minimalistic feel.

• Marquette Drive would no longer connect with Stony Island Avenue, a route that bisects the current Jackson Park course. Jeffery Avenue would continue to run through the course, but an underpass would keep golfers from having to dodge cars.

• The first hole, perhaps no more than a few hundred yards from the Obama library, would be 448 yards from the tips (306 yards for seniors). The 18th is a meaty par-5 that could stretch to nearly 600 yards. So … reachable by Justin Thomas with back-to-back 3-woods?