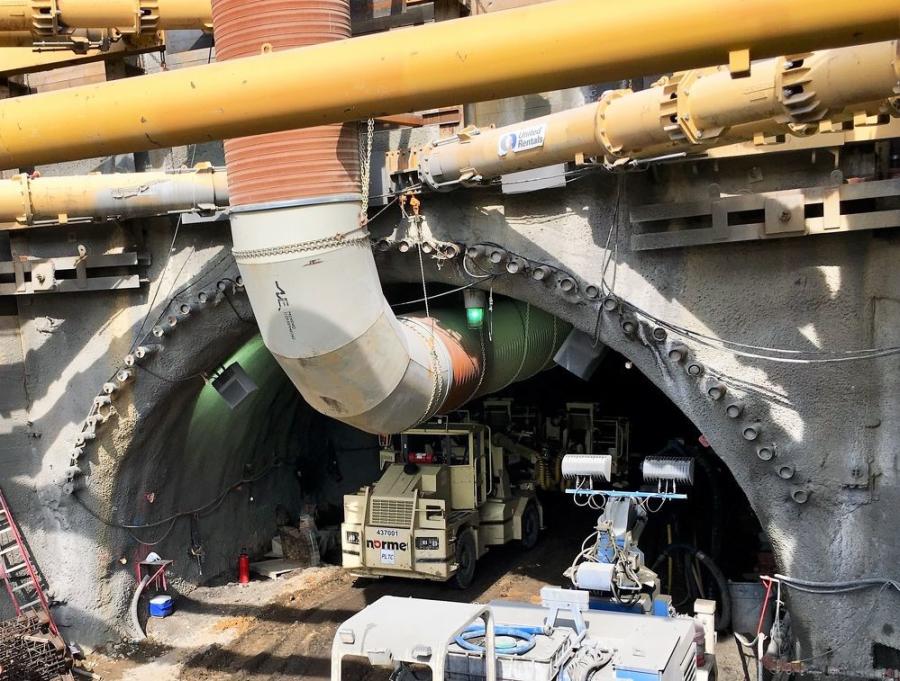 "The Purple Line is unique in that it is an east-west circumferential transit link that connects north-south rail lines, but does not travel into a major city," said Michael D. Madden, Purple Line deputy project director. "It also is the largest and only the second transit project in the U.S. which is being delivered through a design, build, finance, operate and maintain private-public partnership (P3) approach."

The total cost of the project is $5.6 billion, which includes approximately $2 billion for design and construction, and operation and maintenance of the Purple Line for a 30-year term. Located entirely within the Capitol Beltway, the project is being built in very well-established communities, which presents a number of significant design and construction challenges. 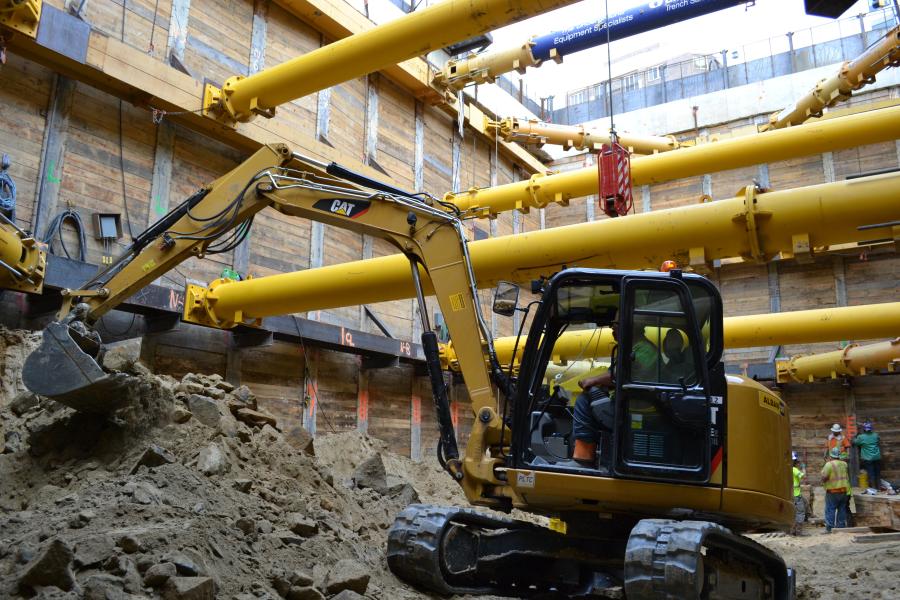 "Fitting the Purple Line light rail line into such a built-up environment has required not only careful design that is sensitive to the concerns of residents and businesses along the 16-mile corridor, but also has required extensive public outreach efforts and frequent engagement with those communities and stakeholders. This close coordination with the public and local jurisdictions began in the early planning stages of the Purple Line and continues through the current design-build project phase."

Madden said providing an improved transit option that will become a key element of a balanced transportation network system is extremely important, as it will help improve mobility and accessibility within a very congested corridor that continues to grow.

"The need for building the Purple Line dates back to the late 1980s, and has been long recognized as a high-priority project and missing link in the region's transportation system. Project planning for the Purple Line began in 2002, when a variety of alignments and modes were evaluated. The project travels through older suburban communities in Prince George's and Montgomery counties, which have large populations that rely heavily on transit. Both counties have long recognized the need to strengthen and revitalize the economies in the corridor and the substantial potential for transit-oriented development."

The greater Washington region consistently has some of the most bogged down roadways and longest commute times in the nation. While existing rail lines, which are oriented north-south (Metro and MARC), serve the region by accommodating people travelling into and out of downtown Washington, D.C., the existing east-west roadways are highly congested, resulting in slow and unreliable east-west bus services. 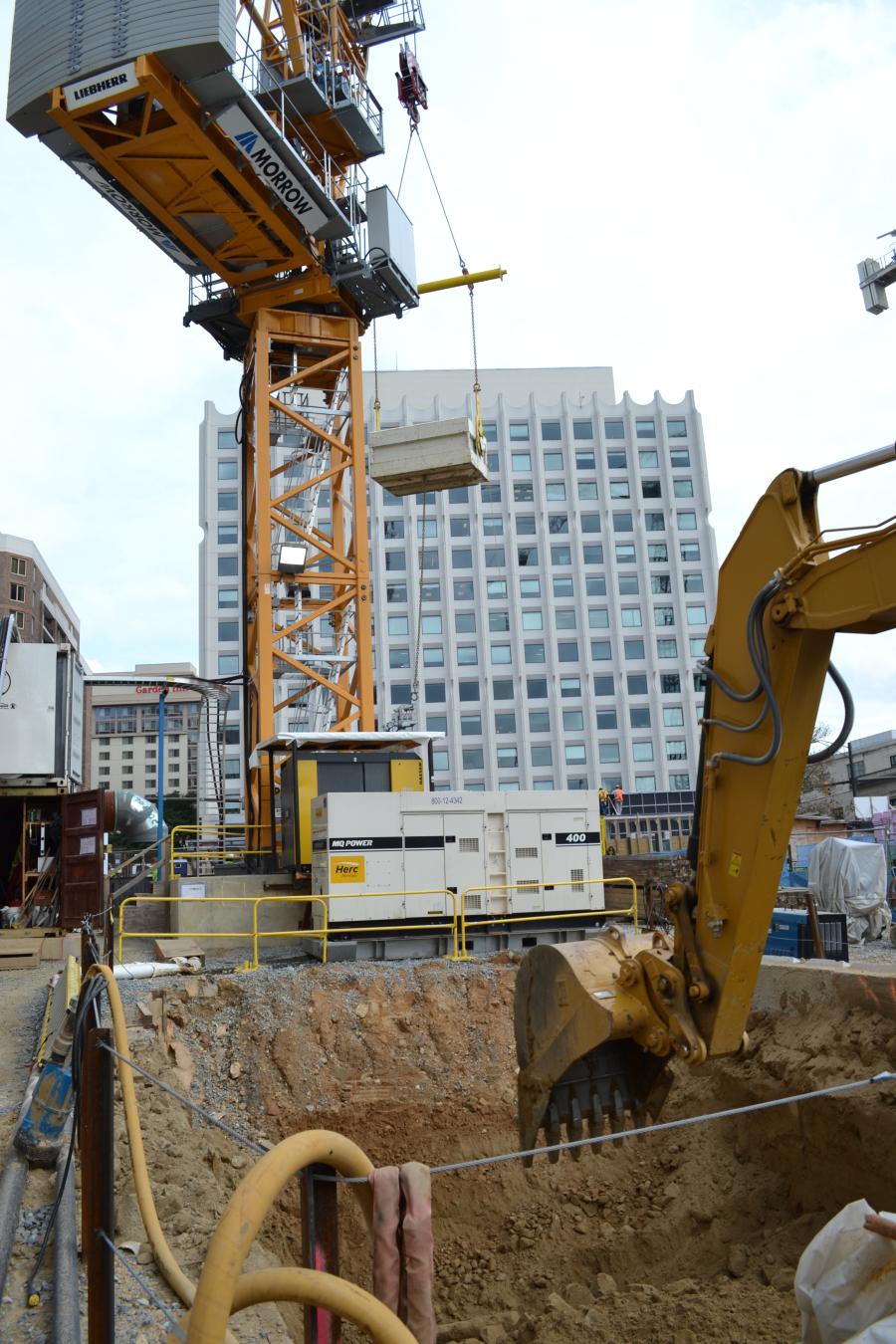 "The number of people and jobs in the area is continuing to grow, and more people are traveling east to west and vice versa. The Purple Line would improve access to and connectivity with the regional Metrorail system, by linking both branches of the Red Line, and providing direct connections to the Green Line and the Orange Line, as well as linking to all three MARC commuter rail lines, AMTRAK, and numerous bus services."

The goal was to connect communities along the 16-mi. corridor, including the major central business districts and activity centers of Bethesda, Silver Spring, Takoma-Langley, College Park and the University of Maryland (the state's primary university and largest employer in Prince George's County) and New Carrollton.

"There is a large population in the corridor that relies heavily on transit, especially in the Takoma/Langley Park area. The Purple Line would help to strengthen and revitalize communities and economies in the corridor and increase potential for transit-oriented development around stations.

"Over the past several years, Prince George's and Montgomery counties have been updating land use plans and putting in place sector plans to effectively prepare for and allow for increased transit-oriented development near Purple Line stations. As a result, completion of the Purple Line is critical to economic growth in both counties, and therefore, the counties expect this long-term transportation investment to be a once-in-lifetime, transformative project."

Since the start of construction in August 2017, there has been more than $1 billion in new development along the corridor. The American Public Transit Association has stated that every dollar invested in transit development generates four dollars in economic returns. 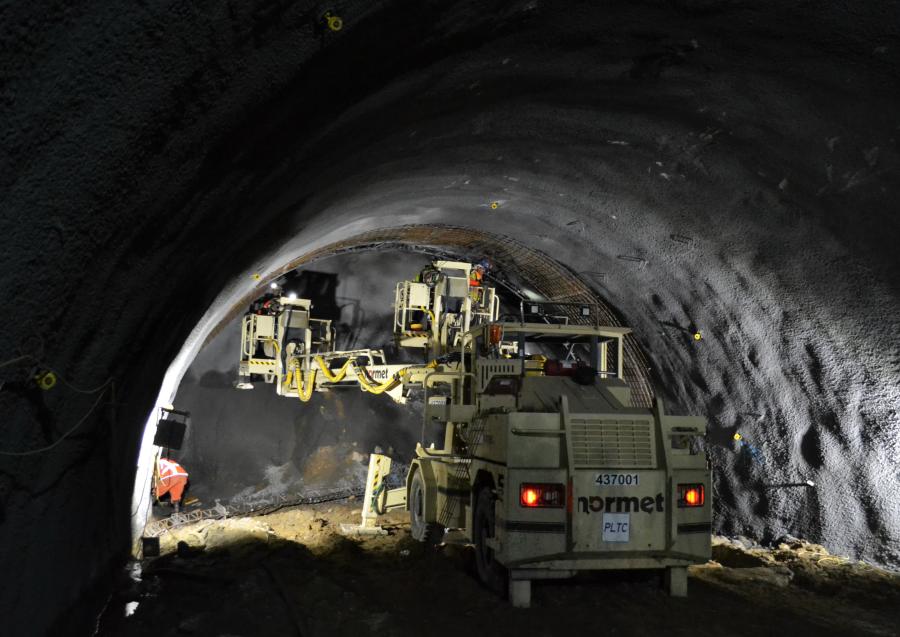 According to Carla Julian, Purple Line Transit Constructors, senior manager, public affairs/community outreach, the elements have not been a major concern for construction crews.

"Weather has not been an issue so far. When it rains, we do have to pump water out of the tunnel some, but it is not a huge impact."

As for work being carried out, "We have demolished several homes that were acquired by the state for the project, several gas stations and a shopping center, as well. The shopping center is the future station site for Woodside.

"Clearing, grubbing and grading have started along the alignment. We are not allowed to clear in forested areas from April 1 to September 1. There are still some trees that have to be removed."

Stormwater management practices are applied throughout the project corridor to satisfy regulatory requirements of the Maryland Department of the Environment to mitigate water quality and quantity impacts and treat impacted impervious surfaces. The efforts will improve the stormwater management function for many neighborhoods along the alignment and will improve the water quality in nearby streams. 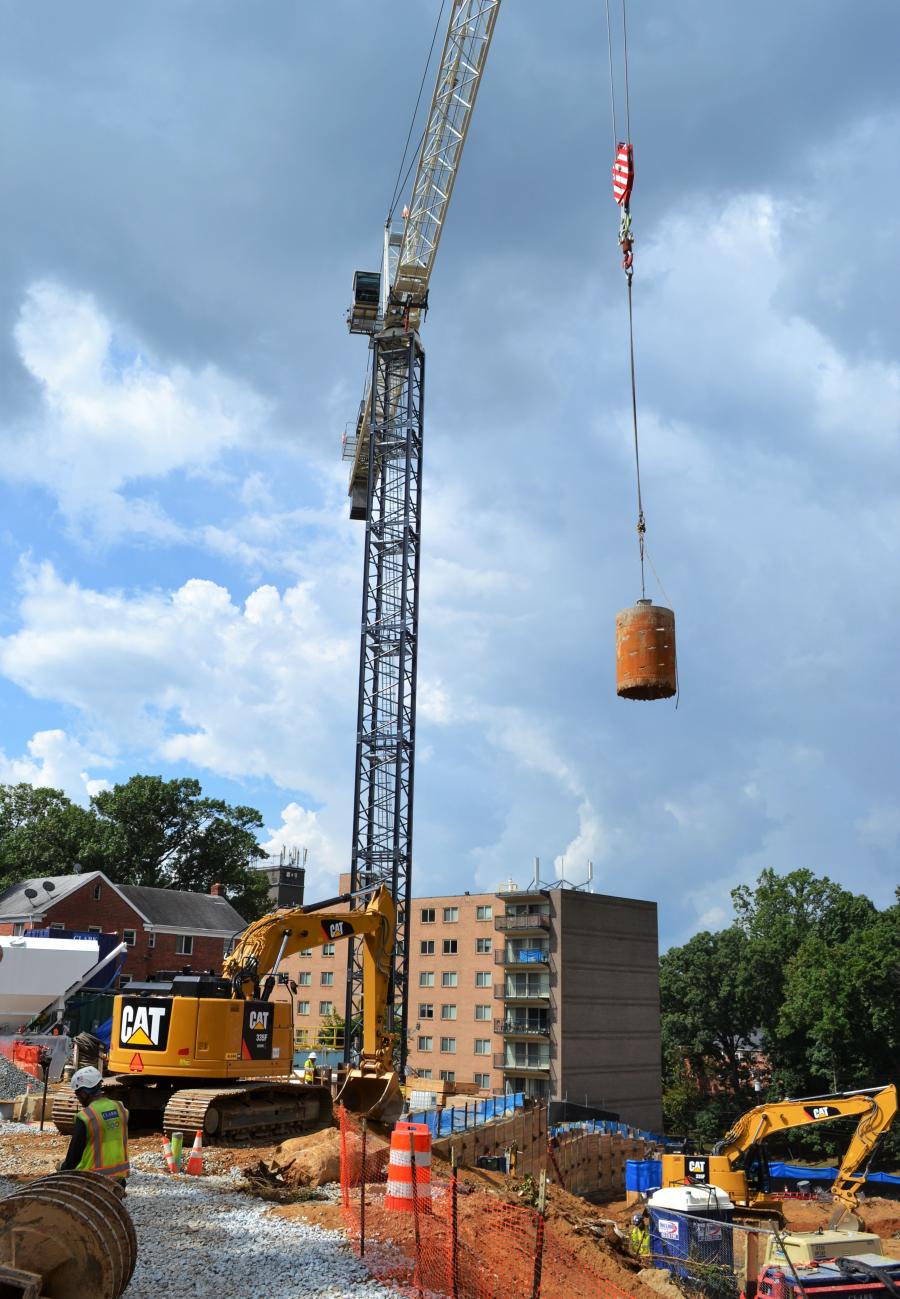 Julian noted that blasting has occurred at the Plymouth Tunnel and will take place at the Bethesda Shaft.

Pile driving was carried out at the Lyttonsville Bridge, and in other areas crews are performing drilled shaft work.

Hours on the job vary, depending on the work involved.

Said Julian, "The contract allows us to work 24/7 with appropriate notice. Largely, we are working one or two shifts, but the tunnel has shifts 24/7. We try not to work nights on the weekends. The tunnel is excavated through the sequential excavation method."

Construction has been ongoing since the full funding grant agreement was received. 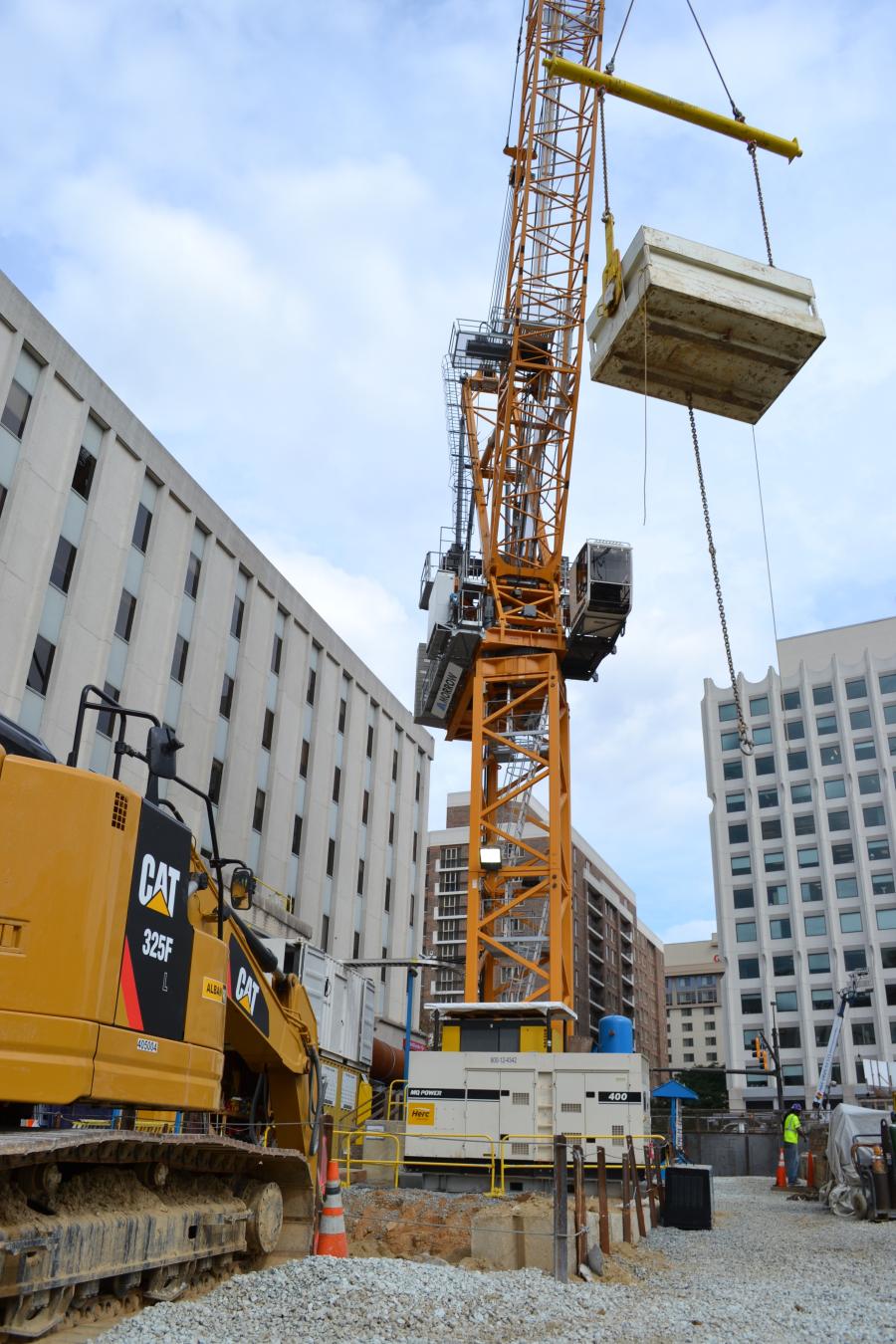 "Folks will start to notice more work in early 2019, with utility relocations, grading, installation of storm water management facilities, installation of retaining walls and all of the civil work that comes before the track and system work. The work completed to date has been largely installation of E&S controls, clearing and grubbing, tunnel and shaft excavation, drilled shafts and demo."

Work has started at the BW Parkway, and historic stones have been removed. The temporary bridges are being constructed, as well.

"All of the coordination and planning of the work is time-consuming," said Julian. "There are so many stakeholders involved, and the coordinating with third parties is massive. Working to ensure the public is informed is also a major effort."

Because of the effect on nearby neighborhoods, communication is a high priority. The public receives notifications through an electronic system. There also are community advisory team meetings, group and individual sessions on a daily basis and a construction hotline residents and other interested parties can call.

Said Madden, "The entire Purple Line team is excited about bringing to the region a new, much more reliable transit option that will significantly improve mobility for thousands of residents and workers, while also helping to enhance the livability of their community."