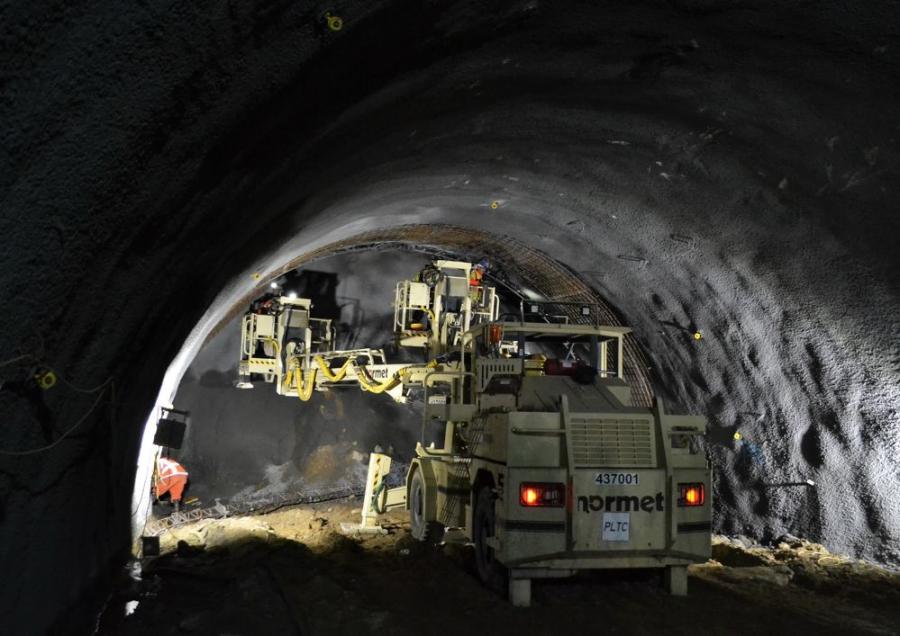 A likeness of Saint Barbara, the patron saint of miners, tunnelers, artillerymen and others who handle explosives, is often found deep underground on these types of jobs. (MDOT MTA photo)

For crews like those working on the Purple Line project, one presence deep within the tunnel provides a little extra protection. The statue of Saint Barbara that looks upon the workers as they go about their jobs is part of a long-standing tradition.

A likeness of the patron saint of miners, tunnelers, artillerymen and others who handle explosives, is often found deep underground on these types of jobs to workers who believe her presence will help protect them from the dangers that come with the territory, The Washington Post reported.

"I just think some things bring good luck," Jeff Hammer, head blasting engineer of Purple Line Transit Constructors, told The Washington Post. Hammer said that he has heard stories of crews in Europe who refuse to enter a tunnel without first knowing that a Saint Barbara statue has been placed there.

Hammer is currently working on the elevator shafts that will connect Bethesda's underground Red Line station to the street, part of the Purple Line project, and he said that since a Saint Barbara was placed on the site in October 2018, the project has been running without major hitches, The Washington Post reported.

"I don't know if it's just our level of preparedness or things are just breaking for us at the same time, but since she's been in the shaft, things have been going much more smoothly," said Hammer.

Carlton Ray's experience with Saint Barbara has spanned the length of a 35-year career in water utility. His current project with D.C. Water is the construction of 18 miles' worth of tunnels for untreated sewage, and with every project the company begins, a priest or minister comes to bless both the workers and the Saint Barbara statue, The Washington Post reported.

"Tunneling has become much safer over the years, but it's still a very risky business," said Ray. "Obviously there's a lot of earth over your head when you're 150 or 160 feet below ground. People feel comfortable being blessed by a priest and having Saint Barbara… If the Lord is looking out for us, that's a good thing."

According to Ray, his company's Blue Plains Tunnel project — just recently completed — clocked 1.6 million man-hours and had exactly zero lost-time incidents. When asked if he thought this clean record could be attributed to Saint Barbara, Ray said, "Who knows? We talk about safety and talk about it. Every little bit helps, right?"

Kevin Murray, a senior field engineer for the Purple Line's shaft construction, goes into the shaft every day.

"I like the idea of [the Saint Barbara statue]," he said. "You know someone is on your side."