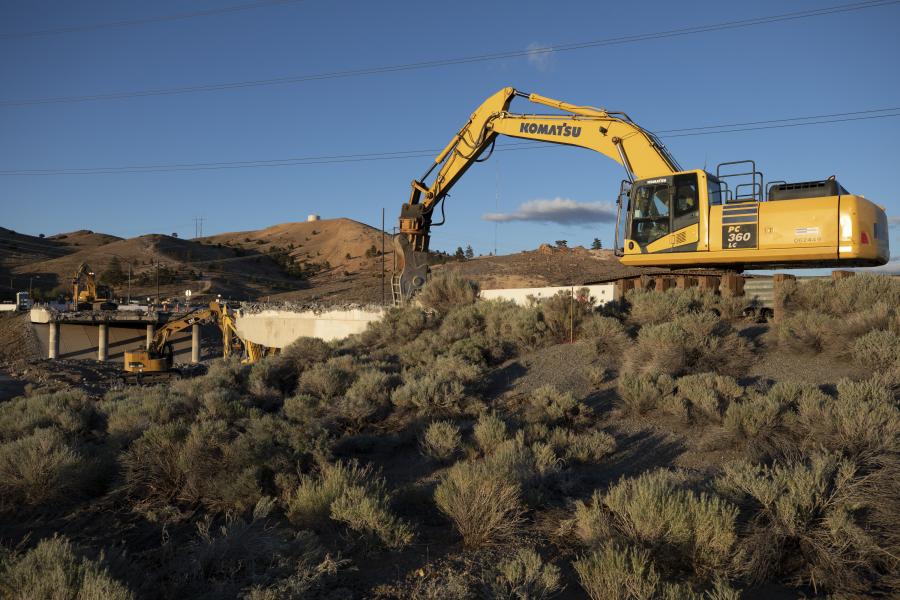 Q&D Construction is serving as the general contractor on the $10.7 million project to repair and improve the Parr/Dandini Boulevard Bridge over U.S. 395.

Q&D Construction, along with the Nevada Department of Transportation (NDOT), is reconstructing a bridge replacement project north of Reno that's designed to provide motorists with an improved overall driving experience. Work on the $10.7 million endeavor on the Parr Bridge began in mid-June 2020.

Q&D Construction was awarded the contract for the job in April.

The previous 48-year-old, 50-ft. wide Parr/Dandini Boulevard Bridge over U.S. 395 is being replaced with a 56-ft. wide structure. In early July, falsework was constructed to temporarily support the new precast concrete bridge girders. In early August, girders were placed over U.S. 395 southbound. To avoid high-voltage overhead power lines, the girders over northbound U.S. 395 were slid into place using a winch system versus the typical operation of using a crane.

"Known as a girder roll, this is the first NDOT project where precast girders will be slid into place," said Ragonese. "Having the precast concrete girders constructed prior to removing the bridge greatly reduces the overall construction schedule."

Once this work is complete, night construction on the bridge will go into full swing to get the diaphragms, cheek walls, stay-in-place metal decking and concrete bridge deck installed.

The new bridge abutments, center pier footing and columns, as well as a portion of the earthwork, have been completed. The new precast bridge girders were delivered by the end of August. In addition, work has begun on some of the aesthetic/decorative structure improvements that will be installed on the new bridge. 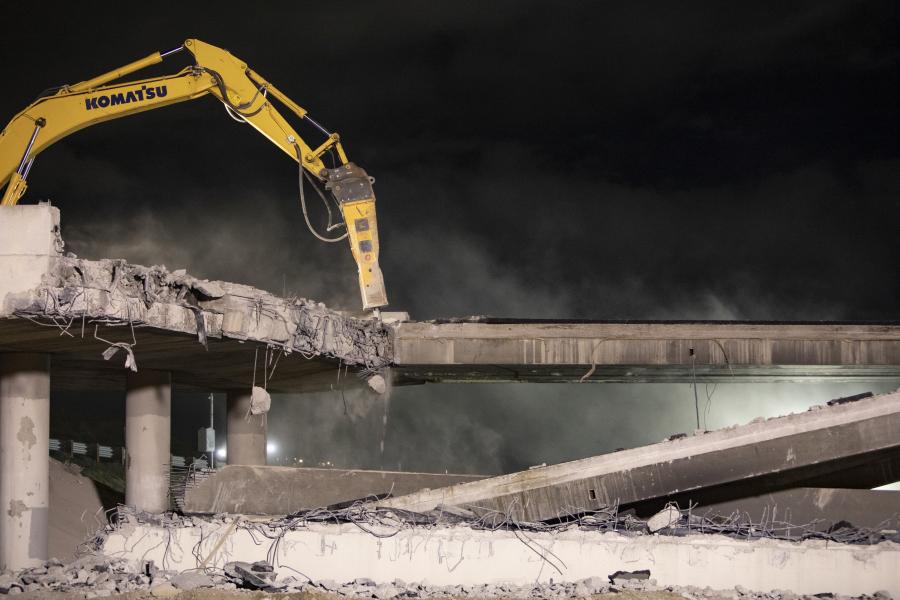 According to Brett Amesbury, project manager of Q&D Construction, excavation for the new footings was completed with the demolition of the existing bridge structure.

"The new footing locations were then excavated two feet deeper, on account of unsuitable existing materials," said Amesbury. "In addition, the existing northbound on and off ramp will be raised around four feet in height to accommodate the bridge structure height clearance. Approximately 20,000 cubic yards will be placed to build up each slope to upgrade the on and off ramps to the new standards."

Regarding the installation of new bridge foundations, Amesbury said the excavation and the demo of the existing had to take place at the same time.

"The excavation was laid back at a 1.5:1 slope, and a ramp in and out of the hole to demo the existing footings out had to take place at the same time."

The main materials needed on the job are structural concrete, precast bridge girders, import borrow, aggregate base and asphalt concrete. 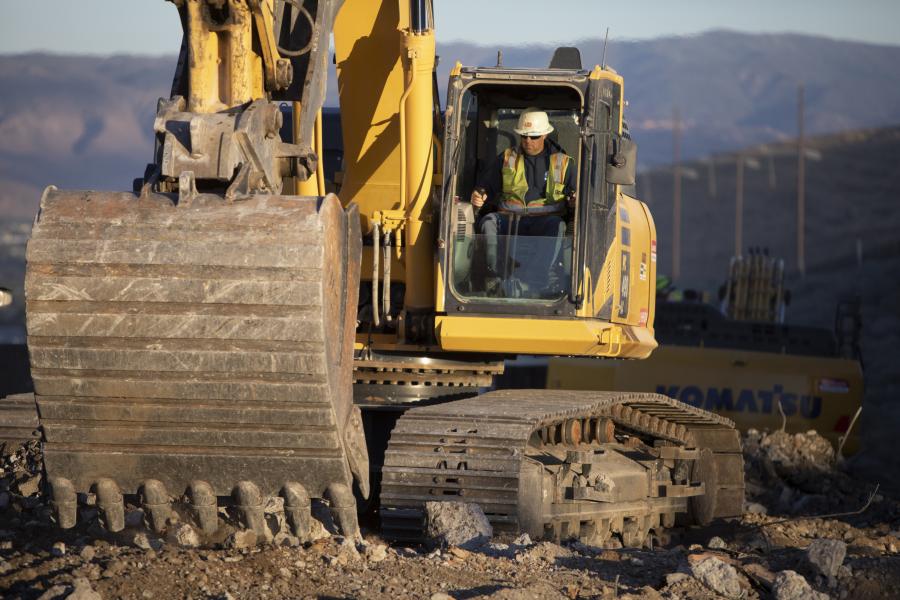 Work remaining includes girder erection and slide of each individual girder, bridge deck construction, which includes barrier rail, sidewalk and approach slabs, installation of the new pedestrian rail and decorative light towers and import and placement of 20,000 cu. yd. of borrow to raise the northbound on and off ramps. Construction of the new roadway surface includes curb and gutter, sidewalks, pedestrian ramps, asphalt paving and barrier rail.

"This project has a very aggressive schedule, with very little room for error or delay" said Andrew Lawrence, NDOT resident engineer. "The first milestone was the removal of the old structure. From there, the clock started on the promise to deliver a new bridge in four months. The second major milestone will be completing the installation of the new precast bridge girders, which is slightly complicated by the high voltage power lines overhead.

"The biggest milestone of all, in which there will be a collective sigh of relief from the team, is when traffic is back on the structure within the goal of four months. After that is completed, the remaining work will include landscaping and aesthetics and slope treatments into late fall."

In terms of site prep, immediately prior to the demolition, borrow was placed over the roadway to protect the existing road surface during demolition.

Lawrence noted that the majority of the site prep for the new structure was accomplished by the demolition of the old structure.

"The position of the two abutments and center pier didn't significantly change between the two structures. The intermediate piers of the original structure were removed and backfilled, as the new structure has only two spans. 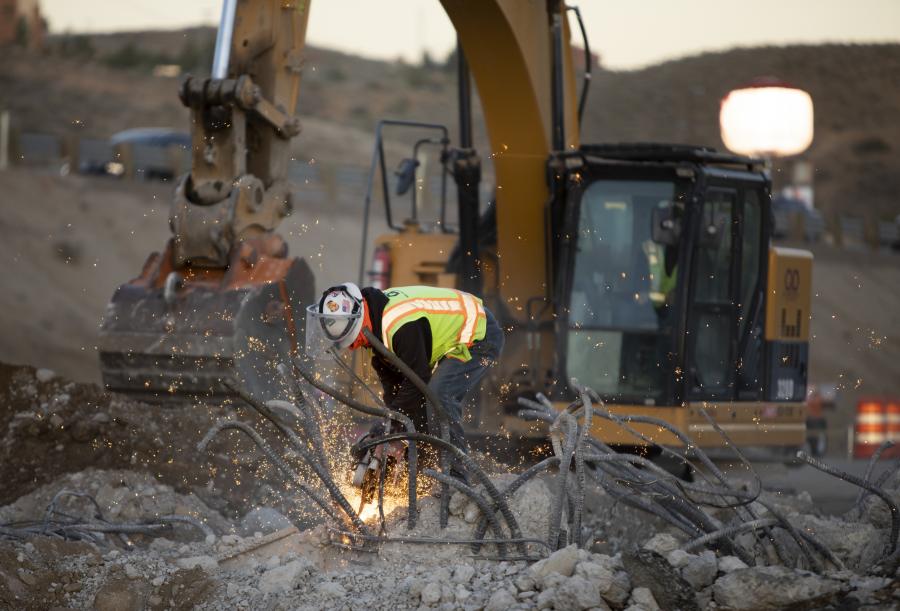 "In addition, several areas were cleared and grubbed to make way for decorative landscaping while others were protected to maintain existing vegetation. The team also met with NV Energy prior to site work to go over safety and procedures when working around high voltage transmission lines."

To date, the elements have not presented any problems for crews.

"In Nevada, wind, snow, extreme heat and cold can all impact construction," said Ragonese. "Luckily, we have not seen any major weather impacts or delays on the project, thus far."

As for the demolition, the process went very smoothly, with 24-hour work and no surprises once crews started on the teardown.

"They started on a Friday night at 9 p.m., and the majority of the structure was down by mid-morning Saturday," said Lawrence. "The remaining time was utilized to break down and haul off all the materials, as well as begin excavations for the new footings and abutments. Traffic was heavy at times, but managed to navigate the work zone without any major issues. U.S. 395 was able to reopen on time by 5:00 am on Monday morning."

The northbound on and off ramps have a significant vertical profile change to match the new structure, which will require the placement of borrow. The southbound on and off ramps will be repaved to tie into the new structure at near the same elevation. Lastly, work will begin on the installation of a custom pedestrian fence over the bridge, decorative structure towers, as well as placing landscaping rock and other slope treatments to complete the interchange. 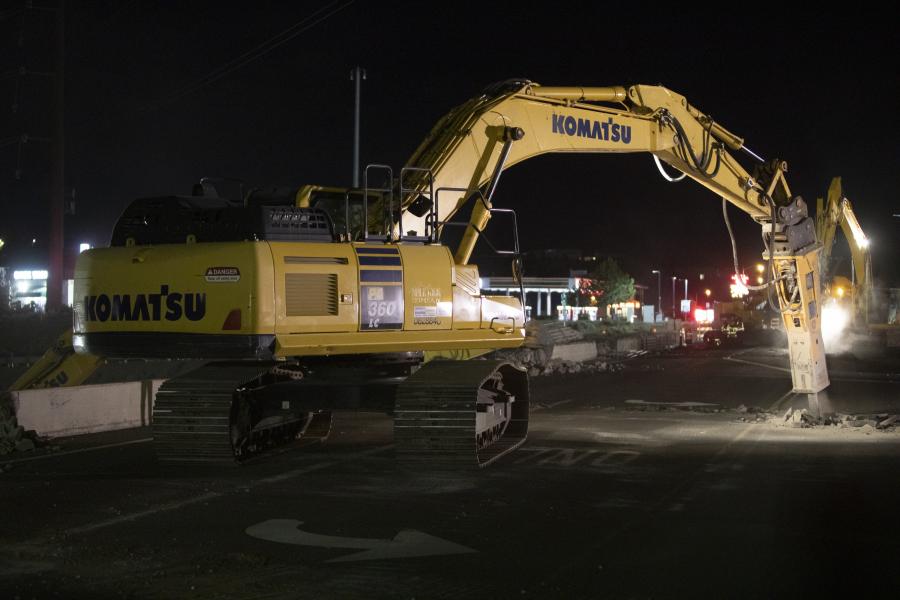 "The bridge replacement was accelerated to 2020 construction. Fast tracking the bridge replacement required the design to be completed within five months. The US 395 Parr Boulevard interchange is a primary access to multiple agencies and institutions, such as the Washoe County (WA) Sheriff's Office, WA Emergency Operations Center, WA Juvenile Center, Desert Research Institute and Truckee Meadows Community College. The department wanted to minimize the disruption and looked for strategies to lessen the construction time.

"Traditional methods required more than one construction season. Ramps would be closed periodically during construction phasing. Nearby businesses and agencies were not in favor of multiple construction seasons. The impact would be tremendous. The alternative strategy was a precast design that would replace the bridge within five months. However, this strategy would require extensive ramp closures and the bridge would be closed to traffic. Alternative routes to reach these facilities significantly increase travel times." CEG