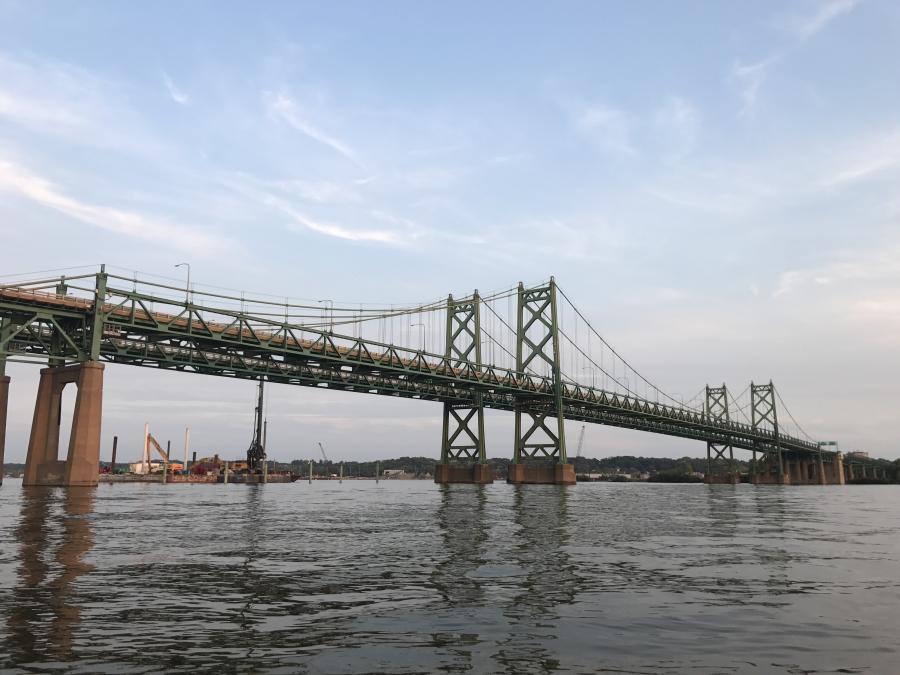 More commonly known together as the Interstate 74 Bridge, the twin suspension spans transport about 80,000 vehicles across the Mississippi River each day between Bettendorf, Iowa, and Moline, Ill.

It is hard to imagine a pair of structures more in need of replacement than the two that make up the Iowa-Illinois Memorial Bridge.

More commonly known together as the Interstate 74 Bridge, the twin suspension spans transport about 80,000 vehicles across the Mississippi River each day between Bettendorf, Iowa and Moline, Ill.

Those two communities, along with Davenport, Iowa, and Rock Island and East Moline in Ill., are the five principal towns that make up the four-county Quad Cities region, the largest population center on the Mississippi between Minneapolis-St. Paul and St. Louis.

The problem with the old I-74 suspension bridges is they were built in 1935 (the westbound span from Illinois to Iowa) and 1959 (the eastbound span), respectively. Due to continually increasing traffic in the 1960s and early '70s, the Illinois and Iowa DOTs upgraded the structures in the mid-1970s to carry interstate traffic and to accommodate 48,000 vehicles crossings each day.

By 2017, that number has increased to between 76,000 and 80,000 cars and trucks. In addition, the interstate standards on the bridge are no longer being met as they each have two narrow lanes, no shoulders and a 50-mile-per-hour speed limit.

Something had to give, and the states of Iowa and Illinois certainly did not want it to be the overworked old bridge spans.

So, with the old I-74 Bridge determined to be functionally obsolete the two states came up with a plan to replace it with a new bridge that is stunning in both its visual and functional design.

The new I-74 Mississippi River Bridge will be just upstream from the old twin structures at one of the few points along the river where it flows east to west. The bridges are basket-handle, true-arch twin spans that will be 3,464 ft. long and give motorists four lanes in each direction, as well as a pedestrian path.

“Having four lanes on each span means that each of those structures will be wider than the older bridges put together,” said George Ryan, I-74 corridor manager of Amec Foster Wheeler, a multi-national firm that, among other services, helps develop transportation and infrastructure projects.

“That will be a significant upgrade for the traffic moving through this area,” he said. “The narrow lanes and no shoulders on the old bridge cause major backups when there are vehicle stalls and accidents because traffic just can't get around them easily.”

Bridge Openings to Be a Year Apart

Groundbreaking for the new bridge was June 26 and construction quickly got moving to meet the benchmarks set for the projects.

If all goes to plan, vehicle traffic will be moving over the westbound structure just after Thanksgiving 2019, according to Danielle Mulholland, I-74 Project manager of the Iowa DOT.

Work on the eastbound span will then progress to completion and ready for traffic in the fall of 2020, she said.

Several construction companies are part of the team that is working on the I-74 bridge project. The contractor erecting the bridge is Lunda Construction Co. of Black River Falls, Wis. The other major components of the project are the viaducts on either side of the river leading to the new bridges. In Illinois, that work is being handled by Kraemer North America, headquartered in Plain, Wis.; and in Iowa, Civil Constructors Inc., based in nearby Freeport, Ill., will build that viaduct.

The projected cost for the entire project, which also will include widening of I-74 and other roadway improvements in both Bettendorf and Moline, is $1.2 billion.

Demonstration shafts were completed in the river in mid-September as Lunda was mobilizing its equipment, which included moving in barges and mooring piles for the heavy cranes and drilling equipment.

A total of 237 drilled shafts will be in the river for the bridge, Mulholland said. She added that Lunda has three drill rigs in the Mississippi River and has moved in a temporary concrete plant on land to supply the project's needs.

The contractors working on this project are ready for any contingency.

“As there is a levee within the work limits of the project, Lunda has had to provide a flood contingency plan to accommodate that,” Mulholland said. “Also, after we drill the shafts, coffer cells will then be installed to build the pier footings and those are designed to withstand the currents up to a maximum flood stage and at that point they will be over-topped.”

She added that the often-brutal Quad Cities' winter weather will not stop the work so that the crews can keep to the 3-and-a-half year schedule. Staging for the bridge work also has been designed to minimize impact to traffic during the Iowa/Illinois cold season.

“Ice in the river could potentially be a major problem, but Lunda plans on having ice-breaking operations nearby so that the bridge crews can continue to get to the pier locations,” said Ryan. “I believe they have about a year and a half worth of work on putting the drilled shafts into the bottom of the river, so it is a very long-term — yet fast-paced — operation in order for them to make their schedule.”

To build the bridge, Lunda will be using approximately 41 million lbs. of structural steel, as well as 64,450 cu. yds. of concrete — all reinforced by 17.6 million lbs. of rebar.

“Just for the piers for the arch itself, over the main channel, Lunda will need more than 2,900 cu. yds. of concrete,” Ryan said. “They will need almost 300 concrete trucks to get out there to pour. I think they plan to barge them out there, but they may be planning to use a slickline to do the job.”

On the Illinois side of the river, work has recently commenced on one of two approaches to the I-74 bridge. Kraemer North America began building the 2,000-ft.-long viaduct there earlier in the summer from 7th Avenue in Moline to the river. Another contract is awaiting approval for reconstruction of I-74 south from 7th Avenue to a point south of 23rd Avenue.

“We have two primary work functions that will be ongoing in 2017, the first being the removal of some unsuitable material at the base of the bridge as we approach from the Moline side,” said Ryan Hippen, construction field engineer of the Illinois DOT. “We will also be building an embankment leading up to the abutment of Lunda's bridge. The second job this fall is the reconstruction of an intersection in the Moline area, which will facilitate staging throughout the remainder of the project.”

Hippen added that about 40 trucks per day are hauling material out of the bridge site and moving rock in for the new construction from a nearby quarry.

Traffic is being impacted by the work in Moline, he said, as the DOT closed the intersection of 7th Avenue and 19th Street in late September. Several marked detours are in place, but he admitted that locals in the area will see their travel disrupted until early December.

Beyond that, the only completed I-74-related work in Illinois is preliminary clearing and materials removal. In 2016, an improvement was completed on River Drive, the first road on the Illinois side at I-74. Hippen said although that was a separate contract, it was still part of the overall I-74 corridor improvement.

Over in Iowa, Mulholland reported that several road improvements have been finished over the last few years, including reconstructions of the U.S. Highway 67/Grant Street intersection with I-74 — the first interchange north of the river in Bettendorf. More work was completed on the nearby Lincoln Road overpass over I-74, too, both done in preparation for the bridge replacement.

The rest of 2017 will see Civil Constructors continuing its work on the bridge piers on land in Iowa, a task that will last throughout the winter, Mulholland said.

Back in Moline, Hippen said that by January the Illinois embankment and the intersection improvements will be completed.

“We are anticipating a nine-month settlement period for that embankment prior to constructing on top,” he said. “Our contractor will start pile-driving operations this winter and that will progress as weather permits for their substructure work on the viaduct.”

Although activity at the I-74 bridge site is heavy now, Mulholland said, it will be light compared to what it will be when 2019 rolls around.

“That will really be crunch time and will remain so until we open that westbound structure at the end of 2019,” she said. “That is when we will need ironworkers and other highly-skilled labor. The bridge arch is being fabricated in Indiana and the number of folks doing that is huge, too. The work will be going on maybe 20 hours a day for six or seven days a week, so it will really be a huge effort.”

As for the old I-74 suspension bridges, Mulholland said they are tough, well-made structures that will last until the new bridge is ready. In the meantime, both the Iowa and Illinois DOTs will continue their normal maintenance and inspection operations on them until their demolition, she said.

All of the work up until this past summer's bridge work was considered to be Phase 0 and Phase 1, with Phase 2 going on until the opening of the bridges in 2019 and 2020, as well as the demolition of the old spans in 2021. The third phase, starting in 2022, will be landscaping around the bridge and its approaches, and the installation of a pedestrian trail over the river.

Another component of the final phase may include a reconstruction of Middle Road to 53rd Street in Bettendorf and Davenport, although funding for that project has not yet been secured.

“This entire project, including the bridge and the new interchanges, has been designed so that motorists can safely and efficiently get on and off the interstate,” Ryan said. “I think it is really going to open up the area and provide a safe and consistent corridor for travel through the area.”