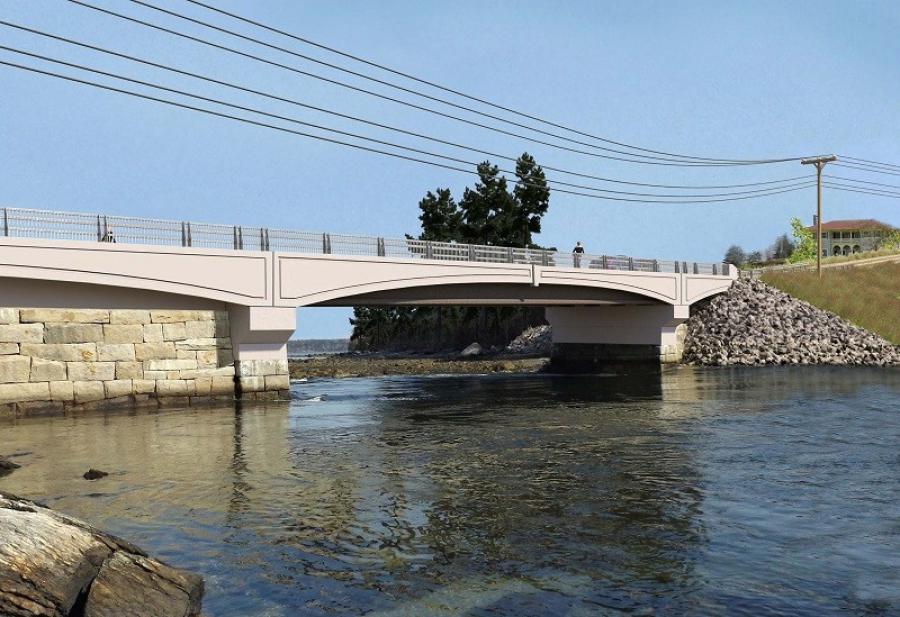 A digital rendering of the new Falls Bridge. (MDOT image)

For those wanting to get some of the last photos of coastal Maine's Falls Bridge in the winter, now is the time to do so.

The scenic and historic bridge, built in 1926 to span the reversing falls off Maine Rt. 175 in South Blue Hill, will soon be taken down and replaced with a modern structure.

The Maine Department of Transportation (MaineDOT) on Jan. 4 awarded a bid to Pittsfield-based Cianbro Corp. for the Falls Bridge Replacement project, according to MaineDOT Bridge Manager Andrew Lathe.

"I anticipate a pre-construction meeting in the near future, but have no other updates at this time," Lathe told the Ellsworth American. "Construction will begin later this winter [or] spring."

Whether to repair or replace the Falls Bridge has been a topic of discussion on the Blue Hill peninsula and with MaineDOT for two decades. Lathe has said previously that a rehabilitation would provide the current bridge a lifespan of 50 years, but a new bridge would last about 100 years.

At numerous meetings over the years, some peninsula residents lobbied for a rehab of the historic structure, one of just two rainbow arch bridges that remain in Maine.

Funding for the effort will come partially from the federal government, MaineDOT noted.

A citizen-run website called historicbridges.org describes the Falls Bridge as an "impressive, ornate example in a beautiful setting."

Indeed, the 94-year-old span has been a continuing source of inspiration for artists, photographers, residents and tourists. Kayakers and surfers navigate the rapids of the reversing falls over Salt Pond, a tidal basin. Daredevils jump from the bridge into the waters, while beachcombers know there are treasures to be seen from the shores of the pond at low tide.

The state has noted that the bridge has advanced deterioration with heavy cracking in areas of concrete. Several embedded stones at the base of the structure show signs of movement, and the underside of the bridge has extensive cracking and heavily corroded steel, according to a MaineDOT report.

The Ellsworth American reported that in 2019, the transportation department announced, via a phone call to the Blue Hill Select Board, that the decision had been made to replace the bridge instead of rehabilitating the structure.

The new bridge, which Lathe described as consisting of five "precast concrete girders with exterior girders supporting an aesthetic fascia panel," will accommodate pedestrians and bicyclists. Provisions made to facilitate recreation on a new bridge has been an ongoing request from area residents who attended public hearings about the structure over the past 18 years.

The replacement span will feature two 11-ft.-wide traffic lanes and a pair of four-ft.-wide shoulders for walkers and bikers, MaineDOT bid documents show. Currently, there is just enough room for two lanes of vehicle traffic to pass each other on the bridge.

The Falls Bridge will be closed to traffic for roughly 60 days during construction, and for one month before the closure and three months following the closure, the bridge will be restricted to a single lane of one-way alternating traffic.