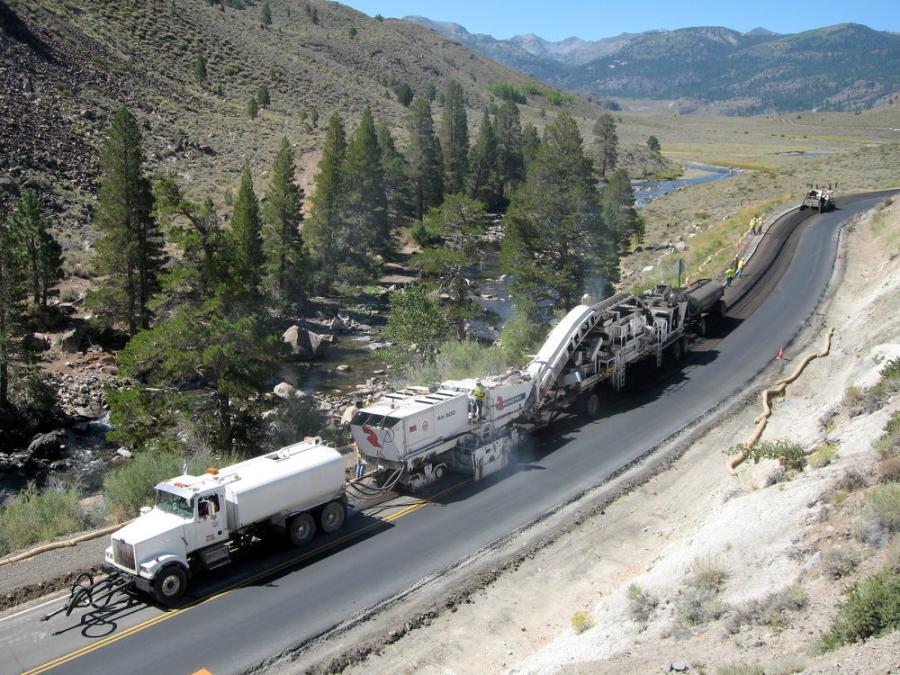 A stretch of recycled paving work by Coughlin Company.

From a vantage point of southern Utah, 2018 looks like it could be a good year for the U.S. asphalt paving industry, perhaps particularly for the reclaimed-recycled asphalt segment.

Darren Coughlin is owner of St. George, Utah-based Coughlin Company and president of the Asphalt Recycling & Reclaiming Association. Coughlin said existing and proposed policies coming out of Washington bode well for the immediate future of the industry.

“I'm optimistic,” Coughlin said in early February. “The trajectory of growth seems to be pretty steady.”

His remarks came days after President Donald Trump officially asked Congress to create and fund a $1 trillion-plus infrastructure program to begin restoring the integrity of the nation's highways and bridges. That initiative comes two years after Congress passed its five-year Fixing America's Surface Transportation (FAST) Act. Together, the two measures are engendering optimism in the asphalt paving industry.

Coughlin said the 2015 highway bill “helped our industry” because of language contained in it.

“The FAST Act favored our industry in asking that the industry use more green methods. We are getting some bounce from that. We hope the language continues in any new transportation bill, and we suspect it will.”

The language to which Coughlin alluded are Federal Highway Administration recommendations calling for increased usage of reclaimed asphalt pavement and other recyclables. The National Asphalt Pavement Association has estimated that use of recycled asphalt saved taxpayers $2.8 billion during the 2014 construction season, the reused material supplanting 20 million barrels of virgin asphalt binder. The FWHA Sustainable Pavements Program that encourages reclaiming asphalt has been authorized through 2020.

“The recycling industry definitely is growing, not only because of the economics of it but because of the green aspect,” Coughlin said, noting that the carbon footprint of recycled pavement is as much as 80 percent less than that of concrete pavement. “For both reasons, recycling is very attractive.”

All of which suggests smooth travel ahead for recycled asphalt pavement companies and the asphalt paving industry in general. But how quickly will a new infrastructure bill benefit Coughlin Company and other asphalt paving firms?

The answer hinges on productive political engagement in Washington and Coughlin disowned any ability to predict such things. “I can't forecast that. I would say that a new infrastructure bill probably will produce more benefits long-term than it will in 2018. I think consumer confidence will go up with the passage of a bill. The nation's mindset will change. But extra dollars actually going into a paving company's pockets? I don't see a lot of that in 2018.”

President Trump's push to massively fund infrastructure could have more positive impact on the asphalt paving industry than did the stimulus package of 2009. Though that $830 billion legislative effort was chiefly promoted as an infrastructure measure, it did not in the end pave many miles of roads.

“That was certainly true in our case,” Coughlin said of the 2009 American Recovery and Reinvestment Act. “We didn't see any of that. There were huge urban projects in parts of the country where they could put up big American Recovery and Reinvestment Act signs, but, typically, our recycling and reclaiming projects are on a smaller scale. We did see a small bump in our industry from the Recovery Act. However, it was less impactful than expected.”

On the other hand, the recession that struck in 2008 had relatively little impact on Coughlin Company. “We really didn't see a recession,” Coughlin recalled. “We kept pretty steady work. During the economic downturn, agencies were searching for cost-effective ways to manage projects. Our small company fit that search and the limited budgets the agencies had. Recycling pavement companies didn't take near the hit the rest of the industry did.”

Coughlin observed that there are “a million” annual projections out there. He was asked if his company pays much attention to any of them as it formulates annual plans for operating in nine western states from California to Colorado. He responded that his company tries to keep its finger on the pulse of the market by paying attention to state highway agency planning.

“Most [state] agencies have a five-year plan,” he said. “We try to see what their five-year plans are and how our recycle-and-reclaim disciplines can help preserve their network of roads, how our bids can help them repair what they have already bought and paid for. We try to keep in contact with the agencies in preparing our forecasts, and with the federal administration as well. We work for all of them.”

As a rule, construction industry economists are hopeful about 2018, but the projections are cautionary. One example is the American Road and Transportation Builders Association forecast, which estimates a 3.2 percent increase in total domestic transportation construction in 2018. But while it predicts market growth in California — a Coughlin market — the ARTBA outlook projects significant slowdowns in three other states where the company operates, namely Arizona, Colorado and Nevada.

Despite such aberrations, it is clear that there is plenty of repaving work to be had in the immediate future, because America's highways are growing old. The federal interstate highway network was created — and many of the nation's highways first paved — in the middle of the 20th century. Today, 60 to 70 years later, the 50 states have more than four million miles of mostly paved roads. Almost 48,000 thousand miles of them are interstate.

Because highways are showing their age, Coughlin said highway authorities consequently are operating in a “preservation mode.” Statistics support that description. According to the Federal Highway Administration, three times as much money is spent maintaining and preserving roads and bridges than is spent on new construction. In 2013 — the last year for which data has been released by the FHWA — $4.7 billion was spent on new or widened highways, while $13.2 billion was spent to maintain and preserve existing roadways. A similar emphasis exists at state and local levels, with more resources expended to preserve old road surfaces than to create new ones.

This bodes well for asphalt recycling firms like Coughlin Company, which are well-positioned to benefit from a fresh round of spending by either Washington or state and local agencies. Most money for highway work will be designated for resurfacing projects and that's the sweet spot for asphalt reclamation and recycling companies.

For all these reasons, Coughlin sees the “sustainable pavement” market continuing to grow. To help it along, he and the 129-member Asphalt Recycling & Reclaiming Association are working hard to ensure that state and local highway agencies are knowledgeable about recycling pavement.

“It is not a new technology,” Coughlin said of asphalt reuse, “but there are a lot of agencies for whom it is a new thing. At ARRA, we are really focused on getting out our message, on educating agencies that may not be aware of all the benefits of our reclaiming and recycling disciplines. We want to educate them about how we can help them, both economically and environmentally.”

The 97-year-old family-owned Coughlin Company is a relative newcomer to the asphalt industry. The firm opened its doors in California in 1921 as a water utilities construction and service firm. Several generations later, in 1994, Darren Coughlin purchased the company from his father and transformed the mission of the company.

Today, Coughlin Company services — or “disciplines” — include rotomilling, cold-in-place recycling, and full-depth asphalt reclamation. The biggest component of the company's work is the cold-in-place method of reclaiming old bituminous pavement and laying down a new paved surface using the reclaimed material.

As 2018 begins, Coughlin said the company is settled into being chiefly an asphalt recycling company. “But we are always evolving as a company, with new recycling technology.”

With an estimated 100 million tons of asphalt being recycled each year across the United States, such technology has a bright future.