Some highway construction projects extend beyond the horizon, with right-of-way and paving crews transforming a whole countryside. In Philadelphia, the major reconstruction of an urban segment of Interstate 95 is measured in linear feet. Yet, the relatively short stretch of roadway encompasses a wide range of construction tasks. These include demolishing old viaducts, replacement of city streets and off-and-on ramps, drilling micropiles and laying cobblestone walkways. 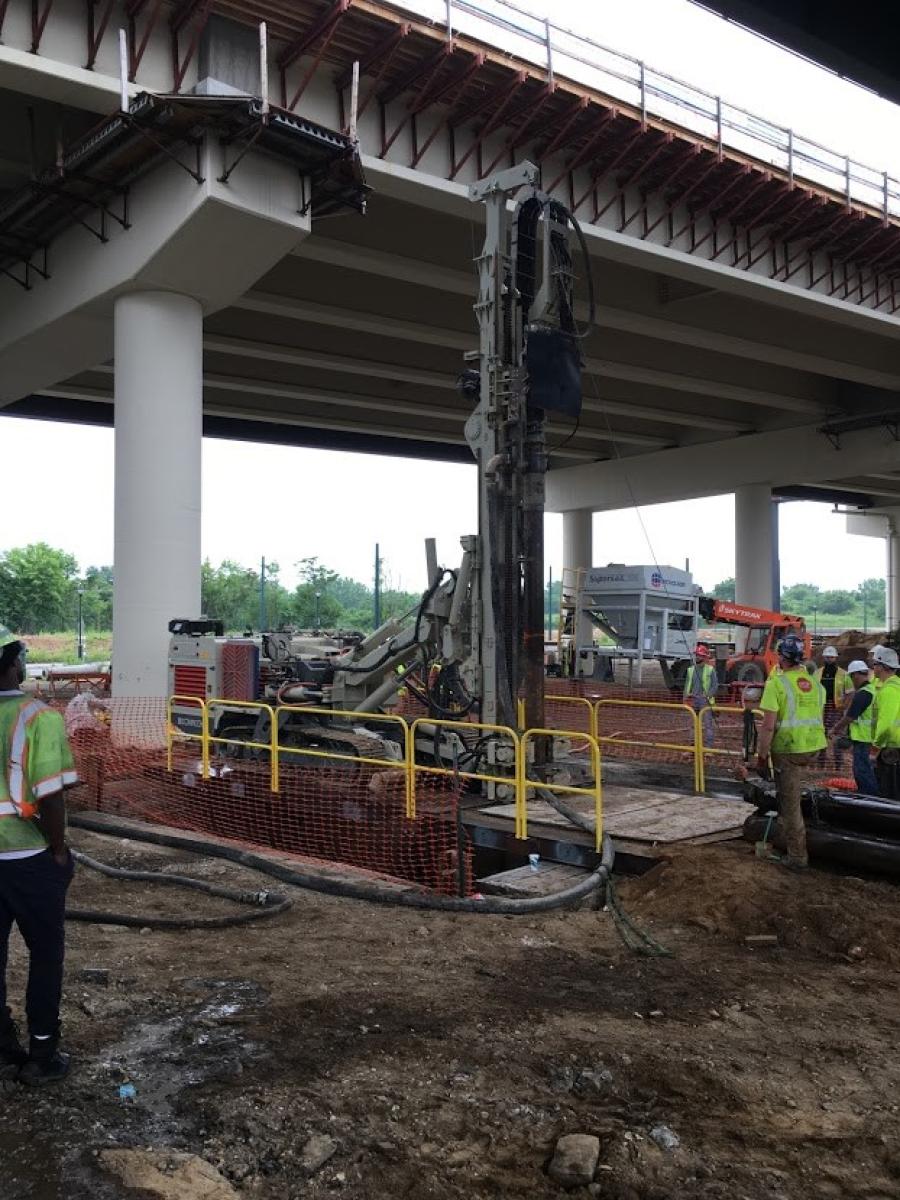 "There are all different kinds of work on this job," said Rick Foster, executive vice president of heavy highway civil contractor James J. Anderson Construction Company. "It pretty much has a little bit of everything. Actually due to the size of the project, a lot of everything. It has been a challenge."

The project is the $312 million fifth phase of a two-decades-long project to upgrade I-95 from the city's Allegheny Avenue south to Frankford Avenue The current work area —called GR4 — is adjacent to Delaware River frontage and principally involves completely redoing the interstate's southbound lanes, viaduct and interchanges.

Even before starting demolition of the old southbound lanes and structures serving them, pier foundation work for the new traffic ways proceeded.

"We began installing micropiles while the GR3 stage of the work was still being constructed," Foster said. "Why micropiles? The GR3 phase used a lot of H-beam piles and nearby residents were telling us, ‘I hope you're not going to do that on the southbound lanes.'"

The Pennsylvania Department of Transportation (PennDOT) had anticipated such concerns and designed micropiles for southbound lanes nearer residential areas. H-beam piles were driven into the ground by repeated blows from a pile-driving hammer, of course, whereas micropiles are drilled through the waterfront-area subsoil into bedrock. It is a slower but quieter and a nearly vibration-free operation.

But in addition to being slower, the micropile installation posed other challenges, too, which the executive vice president described this way: "How do you efficiently drill 70-foot-deep piles under an existing structure with low-overhead clearance?"

That challenge was handed to Nicholson Construction Company. The subcontractor's crews met the challenge by drilling 10-in.-in-diameter micropiles both vertical and battered using a combination of low overhead track drills and excavator-mounted drills. The drilled depth ranged from 40 to 80 ft. In all, some 115,000 linear ft. of micropiles were installed. In non-residential GR4 areas, another 22,000 ft. of H-piles were driven into the ground.

As the foundation work progressed, work started happening above ground, too. A 1.5-mi. viaduct carrying traffic over local streets is being entirely reconstructed and an interchange with Girard Avenue realigned and constructed. The scale of the project is evident in the volume of materials consumed: 6,750 tons of structural steel and another 5,650 tons of reinforcing steel, 23,500 linear feet of precast beams and almost 50,000 cu. yds. of concrete. 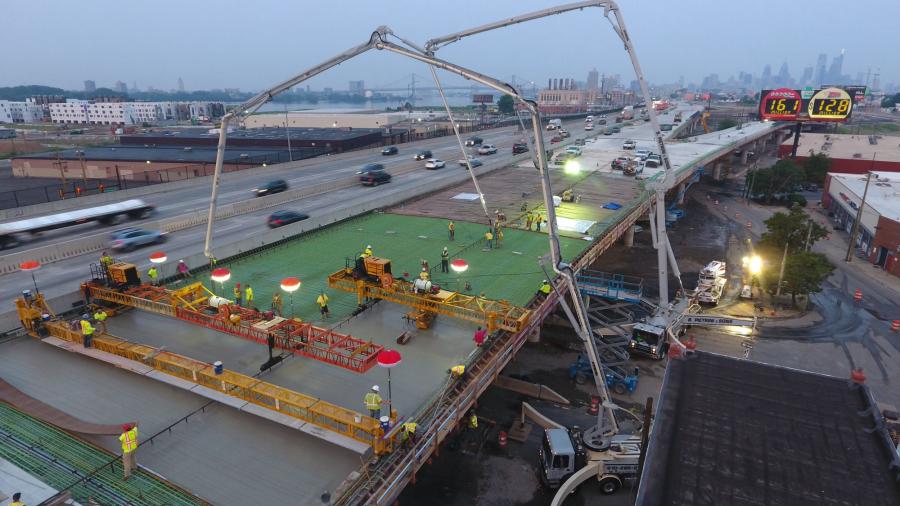 The final mainline pour of a bridge section approaching the Girard Avenue off ramp shows the complexity of some of the work. As explained by Bob Crawford, Anderson's chief engineer and project manager, the bridge taxed the company's engineering expertise. The bridge deck varied in width from 120 to 150 ft. and incorporated different slopes.

"The problem was that the width was about the limit the GOMACO bridge deck finishers can go," Crawford said. "We decided on a second mid-rail and poured with two different machines. We had five GOMACO bridge deck pavers on the project, so we had access to them."

It was a 400-cu.-yd. concrete pour with SJA Construction supplying the concrete. Conveniently, SJA's concrete plant is very near the work area. Just as conveniently, less than a mile away from I-95 on Allegheny Avenue is Anderson-owned Riverside Materials, which supplied the project with new asphalt and recycled products. The proximity of the two plants worked out well for everyone. "We were in a very good spot to do the job," Foster said. 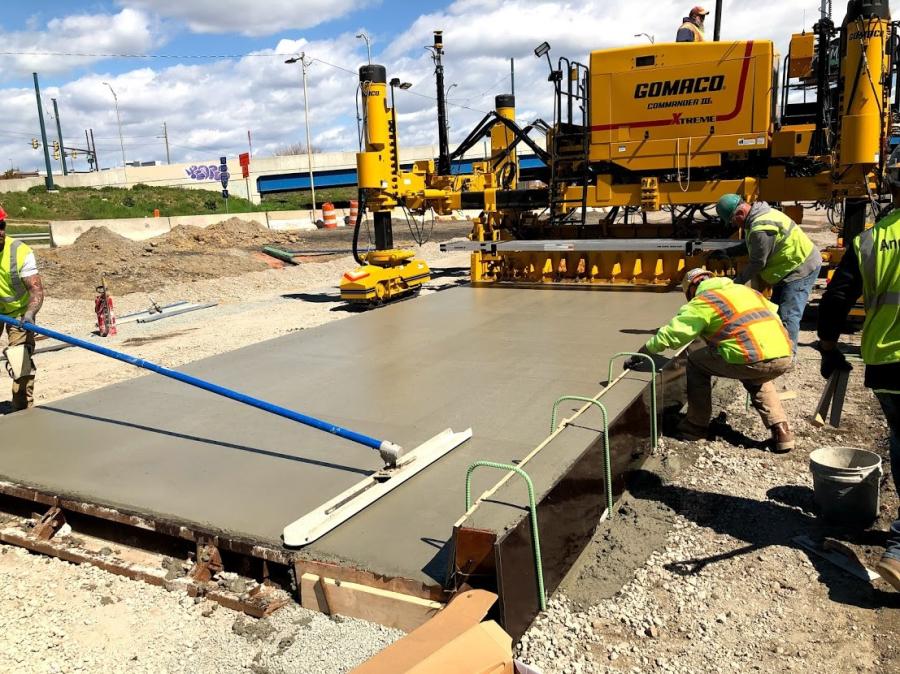 Underneath the northbound and southbound viaduct and ramps is a whole other world of labor. The area is being transformed with cobblestone and blue-dyed-concrete, public parking lots, a shared use path interconnecting roadways, rock-lined stormwater retention ponds and green spaces. Kuharchik Construction installed LED lighting that will illuminate it all at night. Olivieri and Associates has a significant portion of the hardscaping subcontract and Green Valley is performing the landscape work.

"Between now and June of next year, there will be a lot of workers on their knees working cobblestones and pavers and colored concrete," Foster said of the finish work.

But before any of that occurs, the whole area had to be brought to grade.

"We try to use a lot of GPS in grading," Foster said. "A lot of this area is under structures, so it was not your typical satellite GPS."

Numerous GPS stations were involved. A team of engineers coordinated placement of transits and fitted every structural column of the viaduct with a control point.

"The transit operator can move 50 feet and hit another control and start transmitting from it to the paver in the midst of paving. It's pretty wild," Foster said.

The area underneath the viaduct has height clearances ranging from 30 ft. to barely high enough to walk under. Foster said working around so many pier caps and columns is "tedious" and challenging. Some $40 million of the contract is expended on just the underneath part of the work. "It's a whole job in itself," he said.

A 12-in.-by-12-in. concrete edger curb separates different sections of the area beneath the viaduct.

"We took on the challenge of slipforming them using a GOMACO Xtreme Slipform machine configured in 3 track mode," Crawford said. "It was a 100 percent localized GPS job."

The whole project area has been bedeviled by problems associated with working in an urban environment including "a very large homeless population. But working together with an excellent PennDOT resident engineer and his staff, we've managed to keep things moving."Foster said.

Other contemporary issues affecting the multi-year project were the pandemic, which affected workday and labor force issues, and imposition of steel tariffs that sent material prices "through the roof." All in all, however, the I-95 project has progressed without a hitch for the Philadelphia contractor.

The company was founded in 1981 by Jim Anderson, a milling superintendent who decided to go out on his own. The company added asphalt paving and in 1990 acquired Riverside Materials, which today is a 500-ton high-production drum asphalt plant and recycling operation. To complete its vertical business structure, Anderson acquired Dyer Quarry, which supplies aggregates to both Riverside and other customers. Anderson employs in excess of 400.

In 2008, the company formed its structure division. 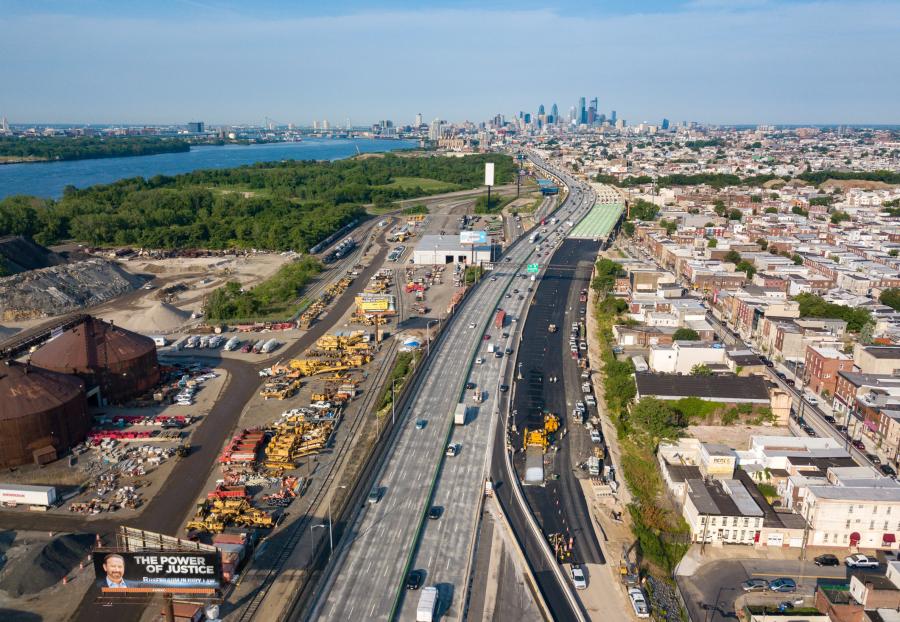 "Bob [Crawford] was the first person hired," Foster said of his chief engineer. The formation of the structure division completed Anderson's vision of a vertically integrated large heavy highway contractor capable of reconstructing Philadelphia's highways through self-supply of construction materials and self-performance of all civil and bridge work in-house.

The GR4 contract will be completed next June. Everything atop the viaduct will be finished by year's end, according to Foster, including median work that will proceed after southbound lanes are opened. "Hardscaping underneath will take the extra time."

Two final phases of the 20-year overhaul of the Girard portion of the interstate urban interstate will extend I-95 reconstruction work South of the highway's intersection with Interstate 676. Those culminating stages of the project are scheduled to be finished by 2029. CEG