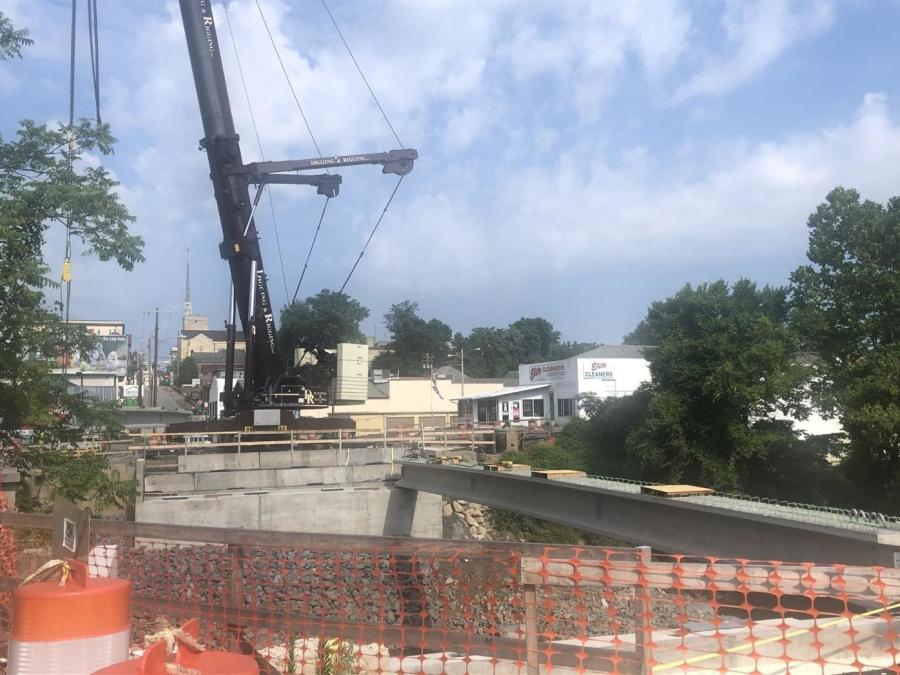 After some unexpected structural problems, reconstruction of the Notre Dame Arch Bridge in Clarksburg, W.V., has begun in earnest. Starting on July 20, large concrete beams began arriving on the construction site.

The 78-year-old bridge is located on West Pike Street (WV 20), near Monticello Avenue, in the city's downtown, where it carries traffic over Elk Creek.

"Right now, the contractors have completed all of the substructure work," said Jason Nelson, the construction engineer for District 4 of the West Virginia DOT's Division of Highways (DOH).

"Aside from taking down the existing bridge and building the abutments that support the beams," Nelson explained, "there was quite a bit of utility relocation like sewer systems and water line relocations."

Outside of the typical problems of reconstruction, there was another issue. The bridge's original design had a footer that was much deeper than the DOH had realized, he said.

"We had to redesign our footing underneath the bridge for that," Nelson added.

A combination of these problems led to the delays. However, the contractors have completed their preliminary work and will begin building the bridge immediately.

The first step entailed workers laying down four large concrete beams that will serve as the structure for the Notre Dame Arch Bridge.

"Over the next week or so, they'll be putting down deck pans and the rebar that will be poured in with the concrete for the deck," Nelson continued. "After those tasks are done, we'll go on to pouring the sidewalk and the walls of the bridge. Then there's quite a bit of approach sidewalks and approach roadwork to get."

Despite the organizational difficulties these delays caused, Nelson stated that the financial cost was relatively small.

"We did have [more] costs with the additional sewer and water line work," he admitted, adding there were also "a little bit of exploratory costs to find out how large the existing footer was."

The original cost was $1.8 million, according to Nelson. The new cost was an increase in approximately $93,000. Twenty percent of the funds were from the state, while 80 percent was provided from the Federal Highway Administration.

Nelson understands the public's frustration with the time it took to get the bridge work going again but is cautiously optimistic about the pace of the project now.

"I know having a road shutdown and detour is always an inconvenience," Nelson said. "But when this is done, we'll have a good product that should last us for many, many years to come."

Barring any extreme weather delays, which will be less impactful since the construction is higher above the water, Nelson believes the bridge will be open by mid-September.