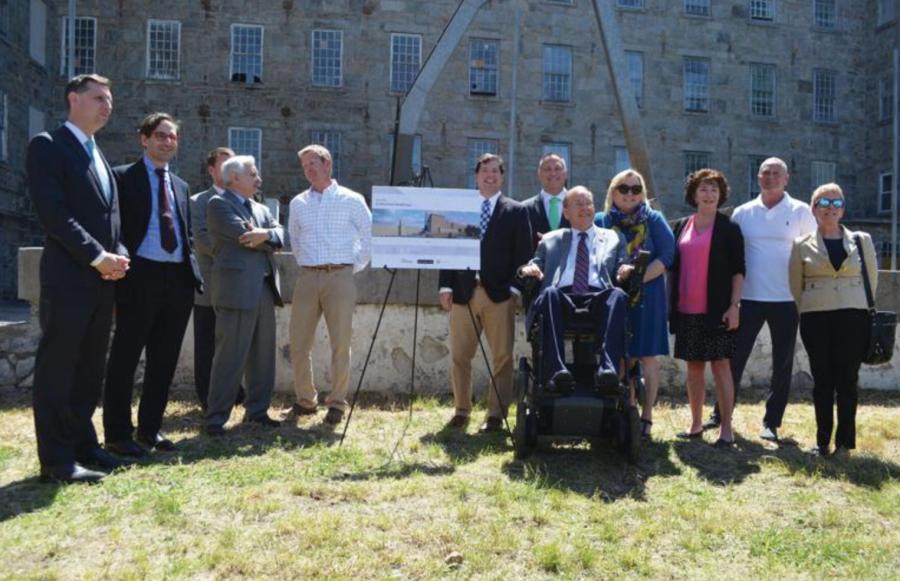 A groundbreaking ceremony was held in West Warwick to celebrate the start of redeveloping the historic Arctic Mill. (photo courtesy of The Kent County Daily Times)

A more than 150-year-old mill building in the heart of West Warwick, R.I.'s historic Arctic Village, its windowpanes broken or boarded over, is getting a new lease on life.

Elected officials, developers and community members convened at the Arctic Mill site June 6 to celebrate the start of the redevelopment of two buildings into a mixed-use complex that will be made up of both commercial space and residential rental apartments.

"Reflecting on West Warwick's lively past as a mecca of manufacturing along the Pawtuxet River, as a premier retail center in downtown Arctic and as a melting pot of the many ethnicities who came here seeking opportunities and settled in our many small villages to work and raise families, I'm energized by the vision to redevelop this property into something that we can all be proud of," said Mark Knott, West Warwick's town manager, during the ceremony with the 19th-century building as a backdrop behind him.

Situated beside a stone dam on the Pawtuxet River, the main mill building was built in 1865 using the stone walls of an earlier mill structure. In 1885, a textile manufacturer bought the property, where 35,824 spindles and 1,039 looms operated into the 20th century.

The Kent County Daily Times in West Warwick reported that Knight Street Capital approached the Arctic Village Redevelopment Agency with a proposal to rehabilitate the building into something resembling its development at Warwick's Pontiac Mills.

Knott said the town looks forward to working with the developer to make that vision a reality.

"We're excited to see an expansion of affordable living options with rental units and are particularly intrigued by the possibility of a craft brew pub overlooking the scenic waterfall," Knott explained over the sound of the Pawtuxet's rushing water.

The development will feature 136 apartments — 31 of which will be for households earning at or below the area median income — as well as around 10,000 sq. ft. of retail space, offices and the brew pub. Plans also include media rooms and a boxing gym.

The project also is set to receive $4.3 million in federal historic tax credits — something that Reed said fills him with pride.

"[Rep. Langevin] and I fight every year to make sure those tax credits are available, and [that] they come to Rhode Island," Reed said. "If you have the resources — as demonstrated by this project — you can put them to very good use."

Langevin added that for him, the impact the Arctic Mill development will have on affordable housing in the state is especially exciting.

Chiefly, a need exists to offer housing across various price points, added Larry Phillips of Knight Street Capital, and the Arctic Mill development's residential options will include both market-rate and middle-income housing.

Carol Ventura, executive director of RIHousing, said in a statement from her office that the mill project will provide "much-needed rental homes in a very, very tight rental market."

She added, "Today's high demand, paired with low supply, has driven housing prices in Rhode Island out of reach for most middle-income families."

The West Warwick news source reported that that was the impetus behind the creation in 2019 of RIHousing's Workforce Housing Innovation Challenge — a program meant to help those caught between high housing costs and being ineligible for traditional affordable housing assistance.

"This program is one important tool that helps respond to the need for middle-income housing by filling a growing and significant gap in a tight housing market of rising rents that has just been exacerbated by the COVID-19 pandemic," Ventura explained. "Investing in housing at a range of price points makes sound economic sense."

Could Arctic Become a Busy Place Once Again?

Between its various amenities and the rental homes it will provide, the Arctic Mill property is destined to become a gathering place that will "breathe life into this whole area," Langevin added.

"Families, friends, neighbors will come together to make the most of this storied space," he said. "It's an important part of this town, and it's going to become even more important going forward."

This project is bound to spur further development in the area and perhaps help Arctic become a bustling village once more, Reed added.

"It's time again for Arctic Mill to be the center of life and community in West Warwick," he said.