Rehab of the Memorial Bridge in Parkersburg, W.V., Shifts to New Owners 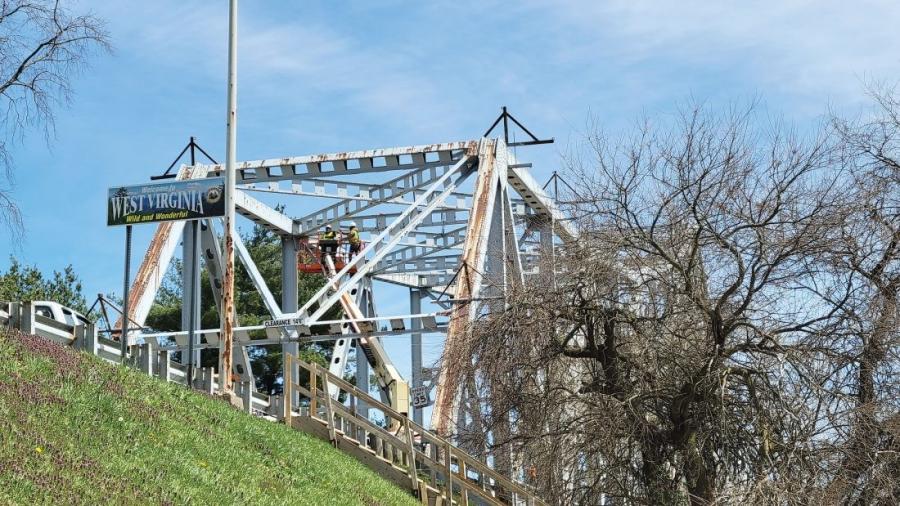 Contractors for Parkersburg Bridge Partners are seen working on the Memorial Bridge from the Belpre side of the span. (Evan Bevins/News and Sentinel photo)

With its acquisition of West Virginia's Memorial Bridge in March, Parkersburg Bridge Partners (PBP) has assumed financial responsibility for the 68-year-old toll bridge, its rehabilitation and operation. That includes setting up a demolition fund, like the one the city of Parkersburg had kept before its sale.

The Ohio River span, linking Parkersburg to Belpre, Ohio, closed March 15 for an estimated 45-day period, the start of the $50 million rehabilitation effort that is expected to last through October 2023.

"Memorial Bridge is now under full-scale rehabilitation, giving us a glimpse of the future of this historic piece of infrastructure," said Ken Szeliga, vice president of construction and operations for United Bridge Partners, PBP's parent company, in a news release. "We are looking forward to modernizing this unique bridge and providing a service life of at least 50 years for the community."

The company paid the city $4 million and made no claim on approximately $11.8 million set aside over the years for maintenance and the eventual razing of the bridge. Of that, $5.4 million was earmarked for a required demolition fund, Parkersburg Finance Director Eric Jiles told the Parkersburg News and Sentinel.

In addition, PBP will create a similar fund, over which the city also will have some oversight, City Attorney Blaine Myers said in speaking to the newspaper.

"Under the acquisition and development agreement, within 30 days after closing, there is to be established a demolition fund," he explained. "That was a substantive part of our negotiations as this was being finalized last year."

The fund will be set up through a third party, which will ensure it is used for the intended purpose, according to Myers.

The News and Sentinel reported that during the rehabilitation process, the city of Parkersburg will continue to employ the staff and manage the bridge. PBP will split the revenue from the bridge with the city, after costs for operations are deducted, Jiles said, but should the revenue fail to cover the city's costs, PBP will make up the difference.

Toll rates will remain the same during the rehabilitation. Once it is complete, the bridge will shift to a fully electronic tolling system and rates are expected to increase to $1 for a single trip across.

Westerville, Ohio's Kokosing Construction is the general contractor on the project, while Burgess & Niple, based in Columbus, Ohio, is the engineer representing PBP, providing construction oversight and handling permitting.

HNTB, with headquarters in Kansas City, Mo., is working on behalf of Parkersburg as its contracted bridge engineering consultant as well as inspecting the rehabilitation work, city engineer Adam Stout told the local news source.

After the rehabilitation is finished, he added, PBP will supply copies of its federally mandated annual inspections to the city.

Various Upgrades Ahead for the Ohio River Bridge

To ensure that the Memorial Bridge rehabilitation is done in a manner that extends the structure's life another half-century, the improvements to be made include:

The Memorial Bridge transports U.S. Highway 50 Alternate traffic across the Ohio River along three spans that total 2,556 ft. It utilizes a steel through truss design, and accommodates two lanes of traffic, one in either direction.