Repairs Under Way on Longest Suspension Bridge in New England 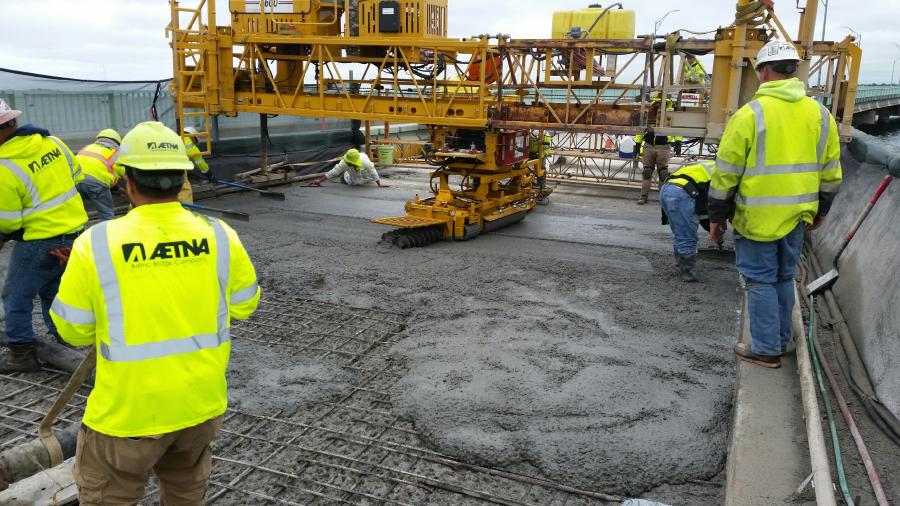 Work is well under way on a project to repair the deck of Rhode Island’s Newport/Pell Bridge — at 11,247 ft. long, it is the longest suspension bridge in New England.

Work is well under way on a project to repair the deck of Rhode Island's Newport/Pell Bridge — at 11,247 ft. long, it is the longest suspension bridge in New England.

“This is a major undertaking replacing the deck of this bridge,” said Jim Malachowski, spokesman of the RDW Group, the Providence-based public relations firm representing the Rhode Island Turnpike and Bridge Authority.

“It's quite a project. The bridge has five different architectural/engineering design components. The bridge deck had an expected life span of 25 to 30 years. The Rhode Island Turnpike and Bridge Authority has paid a great deal of attention to extend the life of the deck, which has been great. It's paid dividends; the bridge is now 48 years old.

“This is just the first phase of a multi-phase, multi-year project. The first phase is expected to cost about $8.1 million. They have a 10-year capital plan. They figure all of this replacement is going to take six to seven years.”

This first phase is divided into three sequences. The first extended from May 15 through June 30 and involved the hydro-demolition of the top 3 to 4 in. of the 8-in. deep concrete deck. Workers also poured new concrete

“They got down to rebar and they did this curb to curb,” said Malachowski. “There were no problems with the concrete deeper than that. So, this really helped with the cost not to replace the entire deck.

“They didn't start until May because there is a chemical reaction for concrete to harden and cure. If you don't get the right temperature, it won't cure correctly and that would not be good for the bridge. When you come out of the winter, the water takes a while to warm up. You can cover the concrete with blankets and heaters, but they felt it was better to wait to start until May.”

In the first sequence, crews with the Aetna Bridge Company, based in Warwick, R.I, closed two lanes of the four-lane bridge, limiting traffic to one lane in each direction. Traffic delays were about a half an hour.

The second sequence is under way now and involves work beneath the bridge. That allows traffic to flow in all four lanes during Rhode Island's busy tourist season.

Beginning in mid-September, the crews will begin the third sequence, demolishing and replacing another section of concrete. That work is expected to last until December.

“When it was built, there was a Navy base in Newport so part of the reason for the heightened magnitude of the bridge was so that navy vessels could pass. The Navy base has since closed. But Newport still has the U.S. Navy War College, which is quite a place. Anyone who wants a career as an officer with the Navy wants that on their resume. We still have navy vessels visiting so it's still necessary to have a bridge of that magnitude.”

Workers will return in coming years to do additional work, but the schedule has not been announced nor have they discussed how they will approach future projects.

Here is a project description from the Rhode Island Turnpike and Bridge Authority:

The Newport Pell Bridge Deck Replacement Project consists of work performed on the Newport/Pell Bridge within Spans 22E to the East Abutment (from the Newport shoreline out 2,000 feet onto the bridge roadway). The work to be performed includes the following as outlined below:

• Partial depth hydro-demolition and replacement of the concrete roadway deck from curb to curb;

• full depth demolition and replacement of reinforced concrete joint headers and installation of new joint seals at some piers;

• installation of UHPC link slabs at some piers;

• removal of existing steel bearings and replacement with new elastomeric bearings at all piers;