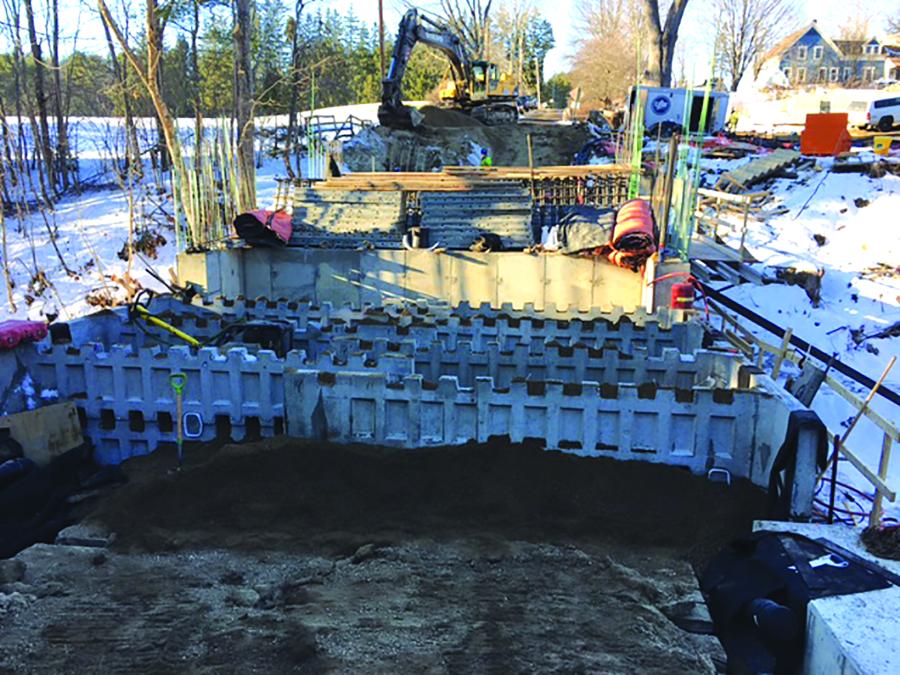 The Stackpole Bridge is the oldest stone bridge on a public roadway in Maine, according to the Friends of Stackpole Bridge. It also is eligible to be listed on the National Register of Historic Places.

Seven years ago, Inga Browne and several of her neighbors received notices from the city of Saco, Maine, that a unique historic bridge near their homes was to be replaced by a new structure.

“We were totally surprised,” said Browne whose house faces the bridge and is only about 7,500 ft. from it. It was going to be a modern concrete span bridge. They actually had signed a contract with a company to do the replacement. That's when we really stepped it up and asked the city to slow things down.”

And not without good reason.

Built by the city of Saco in 1848, the drystone bridge features a keyhole arch about 8 ft. (24.3 m) wide and 20 ft. (61 m) high. It is the oldest stone bridge on a public roadway in Maine, according to the Friends of Stackpole Bridge. It also is eligible to be listed on the National Register of Historic Places.

But not everyone saw the benefit of spending the money to restore what some considered little more than a heap of rocks.

“There were a lot of traditional conservative townspeople who just thought it was just a pile of stones,” Browne said. “They thought it was old and it should be replaced. Our number one goal was education and to put the bridge in historical context.”

Browne and other advocates called and wrote city councilors — some who showed no interest at all, Browne recalled. They held lectures and brought in historians and made sure the local newspapers stayed on top of the stories.

“If we could keep the idea of the bridge alive in people's minds, over time, we felt most people would come around,” Browne said. “I think we would have given up if we had gotten too much negative feedback. We know these bridges are so rare. In 2008 or 2009 we actually had a mason from Pennsylvania visiting. We convinced him to come look at the bridge. He had a colleague visiting from Scotland. They both came up to the bridge and said, 'Oh my god, you guys have to do everything you can to save this bridge.'”

There is no record of who built the bridge or why they made the arch so narrow, though Browne said there is a theory that farmers hoped that it would act as a dam of sorts by preventing the stream from rushing through and flooding their land.

What may have finally turned the tide in saving the bridge was the idea that replacing it with a modern structure would cost about the same — about $1.2 million — or only a little more than rehabilitating the existing historic bridge.

Construction crews went to work last summer. The first task was to stabilize the arch.

“Before any demo work was performed, the interior of the arch was supported with a temporary steel and wood frame system,” said Joe Laverriere, Saco city engineer. “All of the stones of the arch were supported with wedging, etc. and any open joints parged to limit the potential for movement. As excavation work on either side of the arch progressed, each stone on the exterior face of the arch was drilled and steel reinforcing bars dowelled into the stone and then a concrete support wall or collar was poured to lock stones together.”

Once the stone arch was stabilized, workers removed all of the stones of the abutments on either side of the bridge and catalogued each according to its original location. They'll replace the abutments with precast T-wall and face the precast wall with the original stones.

“It will be like a masonry veneer that will marry into the arch with a stone exterior on either side,” Laverriere said.

The primary challenge on the project is that work must be performed in a fairly tight space.

“Just due to nature of site — it's a narrow streambed,” said Laverriere. “The topography is incised in a drainage ravine. There's just not a lot of room. The contractor is working in the road itself with two large excavators. This is a project that someone might have used a crane for, but because of the limited space, they thought it might have been more difficult. It's very tight down there.”

The road has been closed, but the goal is to get one lane open by the end of January 2017. Crews with CPM Constructors will return in May to finish the project.

“This is a fascinating story with twists and turns,” Browne said. “We were just so sure we could get the bridge rehabilitated for close to the same price. That idea allowed the push to save the bridge to go on longer. There were several nail-biter votes where councilors voted not to investigate rehabilitating the bridge. It really was like a soap opera. When all is said and done, the city of Saco and a lot of townspeople are going to be proud of this bridge. It will be a point of pride.” — CEG