Revisiting an Iconic Image in Construction 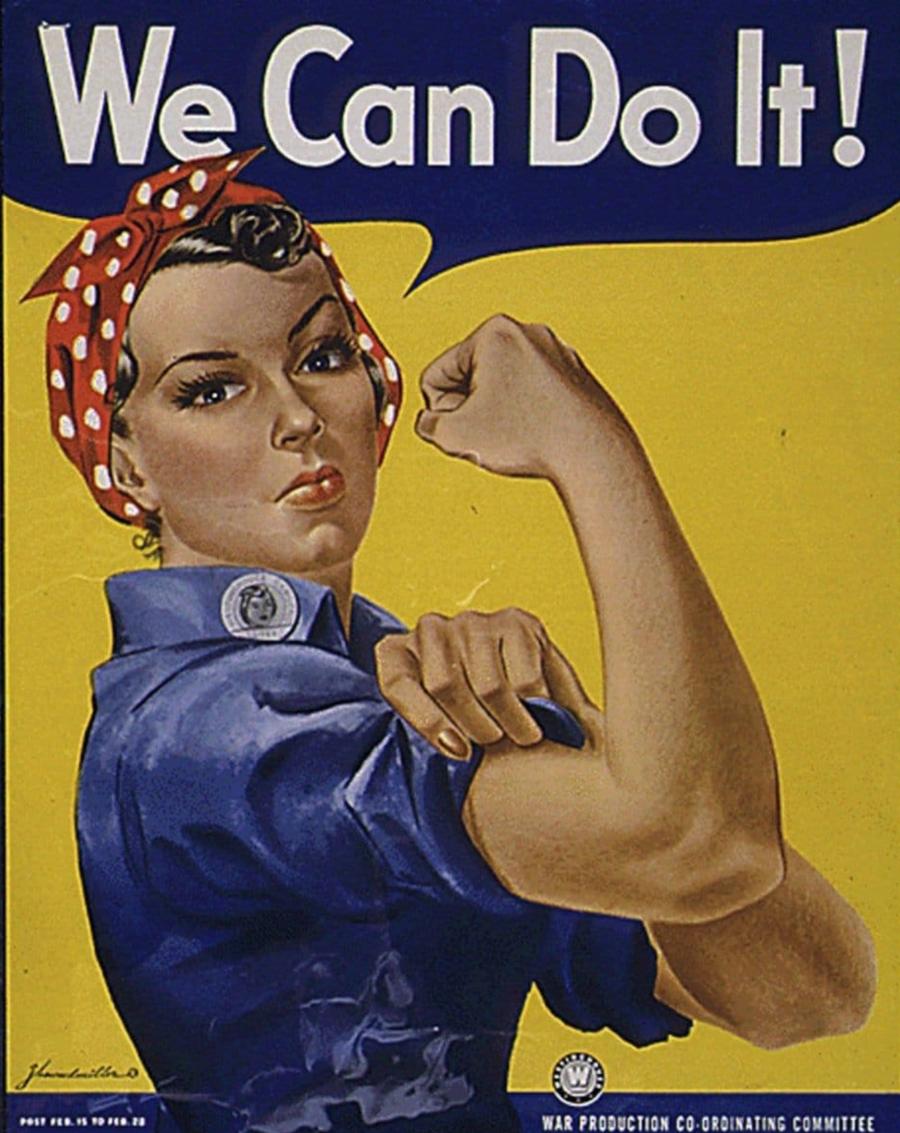 A WWII-era poster made in 1942 by Pittsburgh artist Howard Miller for the Westinghouse Company's War Production Coordinating Committee as part of a series to support the war effort has become an iconic image of female know-how and strength.

Commonly referred to as Rosie the Riveter, the image is actually titled "We Can Do It!" It pictures a woman wearing a red and white polka-dot bandana and blue coveralls flexes her bicep in a demonstration of ability and determination. Her garb is typical of that worn by women working in munitions factories during the period because it kept their hair out of the machines while they worked.

With approximately 16 million Americans serving in the armed forces during World War II, many factories experienced a shortage of workers. In addition, munitions factories needed additional employees. That meant women had to fill them — taking over jobs formerly filled by men.

Various sources estimate that between 3 to 6 million women entered the workforce during the war, contributing to the total of 19 million working women. After the war, as men returned from battle, most of the women were expected to return to their everyday lives as housewives or in traditional clerical jobs considered more suitable for women and, coincidentally, paying less. The percentage of women working outside the home fell from a wartime high of 36 percent to 28 percent in post-war 1947. 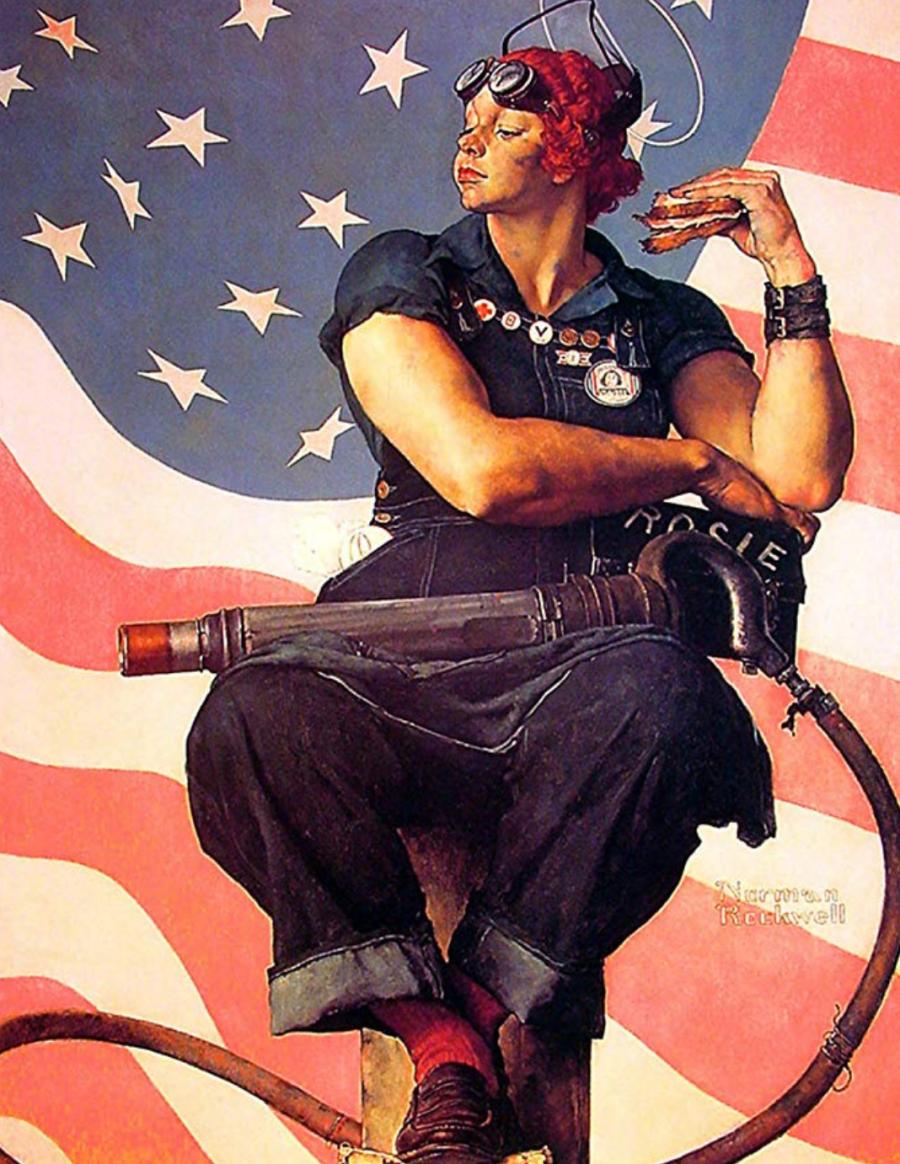 Norman Rockwell's depiction differs significantly from the Westinghouse poster. In it, a different model strikes a different pose — one that imitates Michelangelo's Prophet Isaiah on the Sistine Chapel.

The name Rosie the Riveter first appeared in a song written by Redd Evans and John Jacob Loeb in 1942, based on government propaganda and commercial advertising intended to encourage women to volunteer for wartime factory work.

Rockwell's depiction differs significantly from the Westinghouse poster. In it, a different model strikes a different pose — one that imitates Michelangelo's Prophet Isaiah on the Sistine Chapel. The almost burly woman is enjoying a sandwich while her rivet gun rests on her lap and her foot rests atop a copy of Mein Kampf. The lunchbox at her side sports the name "Rosie."

Over the years, there has been a dispute about the woman who inspired the Westinghouse image. Rose Will Monroe worked as a riveter at the Willow Run Aircraft Factory in Ypsilanti, Mich., building B-24 bombers and was the subject of a United Press International photo. Many others have claimed a connection, including Naomi Parker Fraley, a waitress from California.

Whoever the muse was behind the renowned image, the idea of Rosie became a symbol of women in the workforce — and later, for women's independence, for female empowerment … and for the feminist movement.

Whether Rosie the Riveter inspired the social movement that increased the number of working women in America from 12 million to 20 million over the course of four years (1940-1944), leading to the feminist movement of the 1960s is debatable.

The Westinghouse poster wasn't aimed at encouraging women to join the workforce during the war; it was only displayed at factories where women were already working and was just one of many posters created to motivate employees — most of which featured men.

Few people saw the poster during the war because it was displayed only to employees at plants in Pittsburgh and certain Midwest locations — and only for two weeks during February 1943. According to All That's Interesting, there were 1,800 copies of the poster, which were displayed for a mere 10 days in the Micarta resin plants, where workers made synthetic helmet liners for infantrymen.

Miller's poster was stored in the National Archives with other wartime posters and wasn't brought to light again until 1982 when the Washington Post Magazine ran a retrospective on war propaganda. Ironically, it was not chosen by the Office of War Information for its 1943 War Bonds sale, so its influence as propaganda was limited.

However, the image was adopted by feminist activists and publishers due to its fusion of femininity and strength — characteristics championed by the movement. At some point, the name Rosie was mistakenly connected with the poster, but was not associated with it during the war.

The goal of Miller's poster was to encourage productivity of all workers — male and female — at Westinghouse factories. Rockwell's painting may have been more of a commentary on the circumstances of women joining the workforce and, specifically, taking jobs typically filled by men. As with many of Rockwell's paintings, an aura of patriotism lingers — in this instance, perhaps insinuating that it was a women's patriotic duty to enter the workforce.

Whatever the contemporary meaning behind the Rosie image(s), WWII denoted a turning point for women and could conceivably be considered the foundation for the post-war women's movement as the American female population proved that they could do a "man's job."

Some historians and anthropologists believe that this period, which witnessed white women working beside black women, as a precursor to the Civil Rights movement and a breakdown of other social barriers.

Rosie lives on today. The American Rosie the Riveter Association's mission is to "recognize and preserve the history and legacy of working women, including volunteer women, during World War II," to promote camaraderie amongst their descendants and to suppport excellence in the workplace.