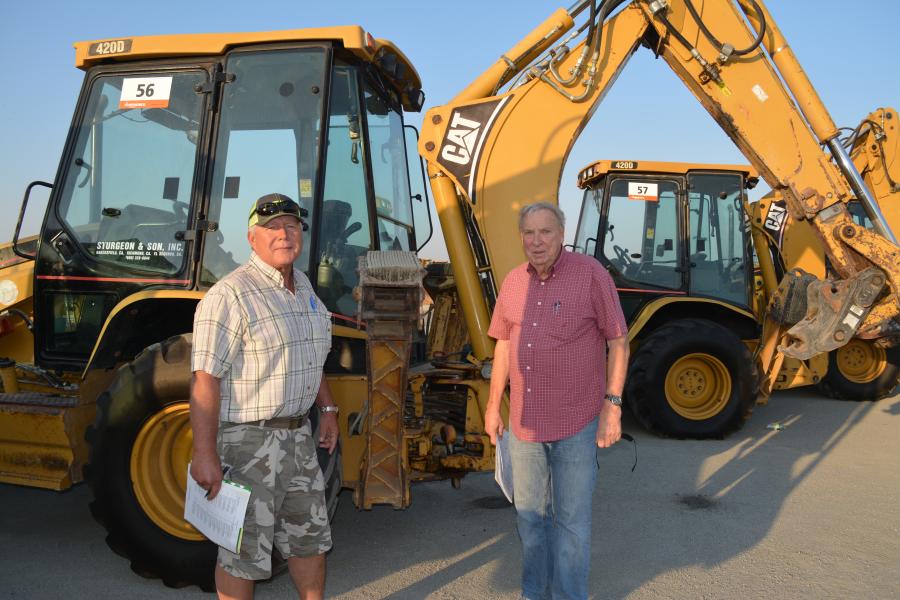 Lance Madgwick (L) of Boise, Idaho, and Russ Yensen of Laguna Beach, Calif., were on hand for the auction. Both showed interest in this Cat 420D.

Traditionally an agricultural hub for Ritchie Bros., the company's Tipton, Calif., auction site held a largely construction and transportation focused auction on Aug. 17 and set a new site sales record in the process. More than 1,350 equipment items were sold for more than $21 million.

More than 2,500 people registered for the Tipton auction, including 1,650 people registering online. Half of the assets in the auction were sold to online bidders, from as far away as Hungary, Poland and Australia. Approximately 72 percent of the equipment was sold to buyers from California. Every item was sold without minimum bids or reserve prices.

“We signed a big construction package early on, which allowed us ample time to market it and build a sale around it,” said Chad Apland, regional sales manager, Ritchie Bros. “As a result, we saw huge attendance for this time of year. In fact, we had close to 1,000 more bidders compared to our Tipton auction in August 2015. We usually see our biggest crowds in our February sale as it's so close to the World Ag Expo, but this sale rivaled it, helping us achieve great results for consignors.”

“Ritchie Bros. once again has shown us that they are the number one player in the heavy equipment auction space,” said Christopher Sturgeon, vice president of Sturgeon Services International. “Our relationship with Ritchie as both buyer and seller spans decades, and once again I am pleased to say that the decision to go with them was easy and rewarding. We very much look forward to the continued business relationship that Ritchie Bros. has so wonderfully kept, as well as the decades of continued business between our companies.”