Roper Brothers Beats the Odds to Be a Successful Family Biz 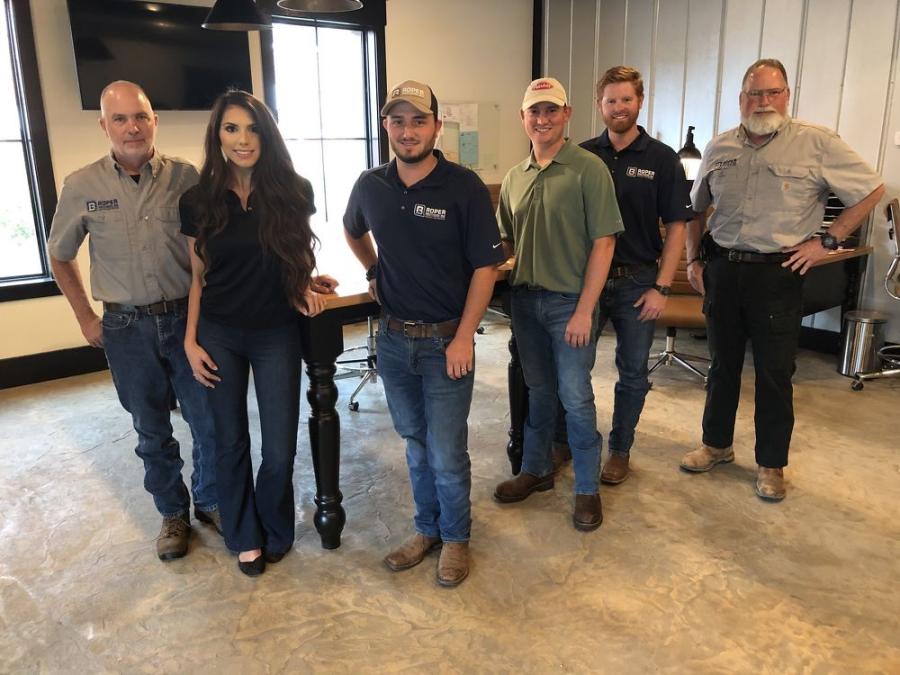 Most family businesses have humble beginnings. Unfortunately, most of them fail, too, within a short period of time.

But the history of Roper Brothers Inc., a general contractor in Fountain Inn, S.C., just outside Greenville, is one of those remarkable tales of a business that has grown into a great success over 35 years while also staying completely family-run. 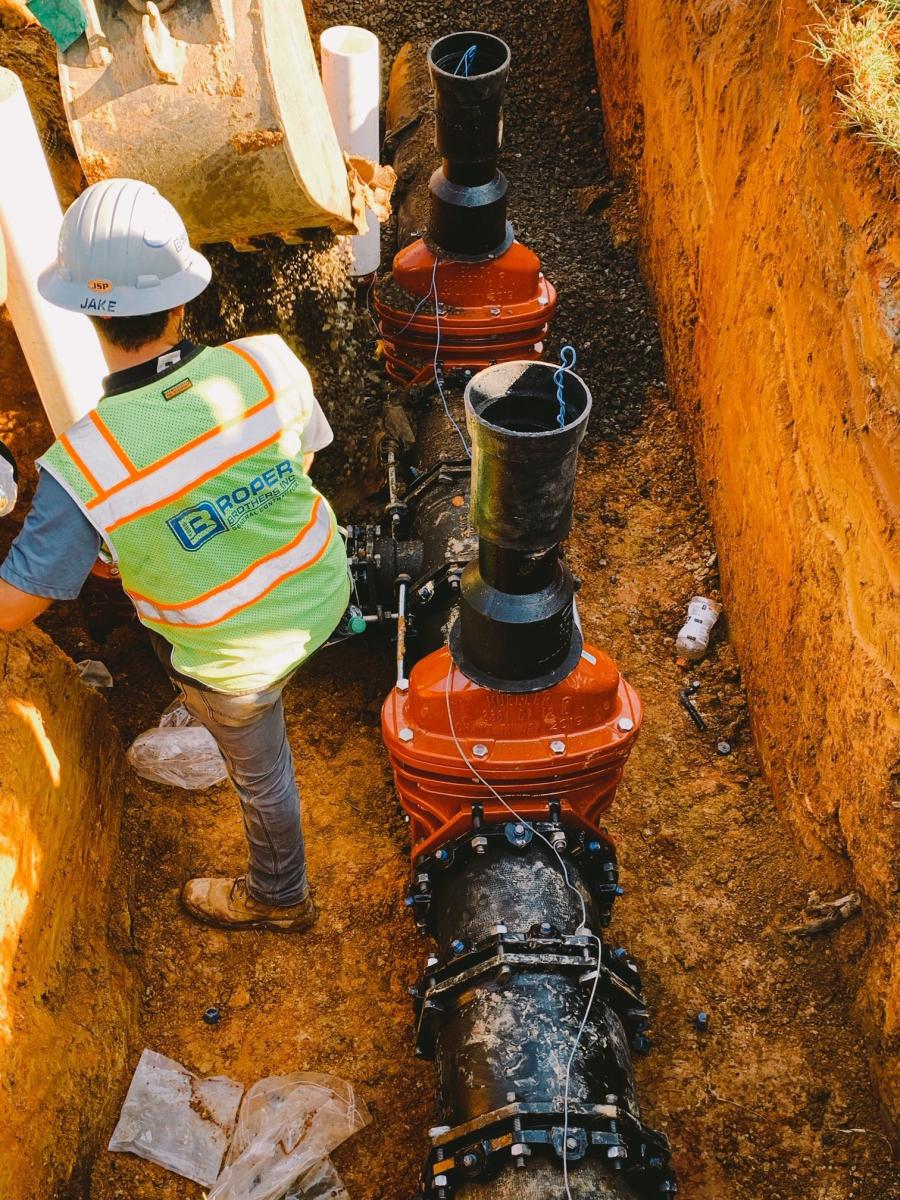 David and John Roper founded the business in 1985 with the vision of serving the underground utility needs of Upstate South Carolina. Since then, thousands of feet of water and sewer mains have been installed by their company for municipal, industrial and private usage. Roper Brothers' construction capabilities has grown to include turn-key site developments, building construction ranging from office space to metal buildings, boring, pipe bursting, effluents monitoring systems and pipe rehabilitation.

Along the way, Roper Brothers has developed a sterling reputation among its customers and other contractors in the area.

John and David Roper feel they can depend on a second generation of Ropers to keep the company on the ascent. Today, John's two grown children, Elise and Jacob, as well as David's sons, Bobby and Brandon, are using their lifelong experience around the business to keep it successful.

But back in 1985, the two elder brothers were just young guys looking to do anything to get their own business going.

"At that time, I was a tool-and-die maker and David was an electrician," said John Roper. "We were looking to make extra money, so we bought an old septic tank truck for $7,500 and began pumping out septic tanks. But we learned real quick we didn't like doing that. Instead, we started getting contracts to pump commercial grease traps. It was an easier and more lucrative business to be in."

"We learned we wanted to do bigger jobs, so we got our utility licenses and started putting in water and sewer utilities," he said. "Our first big project was at Fort Jackson where we subbed for a contractor to put in water mains, about a $40,000 project for us."

As the company added services over the years, one of Roper Brothers' specialties is now pipe bursting, which David Roper said is a very challenging job.

"If you have a sewer main and it has cracks and leaks and infiltration, we can pull a new pipe through the existing pipe and burst it out of the way for the new pipe," he said. "We like to be a specialty contractor and do those jobs that no one else wants to take on. Small or large, size doesn't matter."

As a good example of their inventiveness, John said they once tackled a deep, 550-ft.-long pipe that was in desperate need of reform.

"There was an 84-inch storm drainpipe, 35 feet deep, that a local company needed to have replaced and everybody looked at it as an open cut," he said, "but we came up with a way to line the existing pipe using some of our pipe-bursting methods, and then do concrete grouting in between the old and the new pipe. In fact, the whole family was involved in it — even Elise. She ran the winch pulling the pipes in. It was a unique job and I think we finished in roughly 2½ weeks in between two hurricanes that came through the area."

To accomplish the projects and execute the contracts Roper Brothers has worked in South Carolina, the company has built up a nice stable of construction and utility equipment, including Kubotas, and Hammerhead pipe-bursting and American Auger boring machines.

In 2019, the company also began using small- to mid-sized Hyundai track excavators to help perform its underground utility projects. Roper Brothers went to Crayton Wilson at the MAY-RHI dealership location in nearby Piedmont to get what it needed. 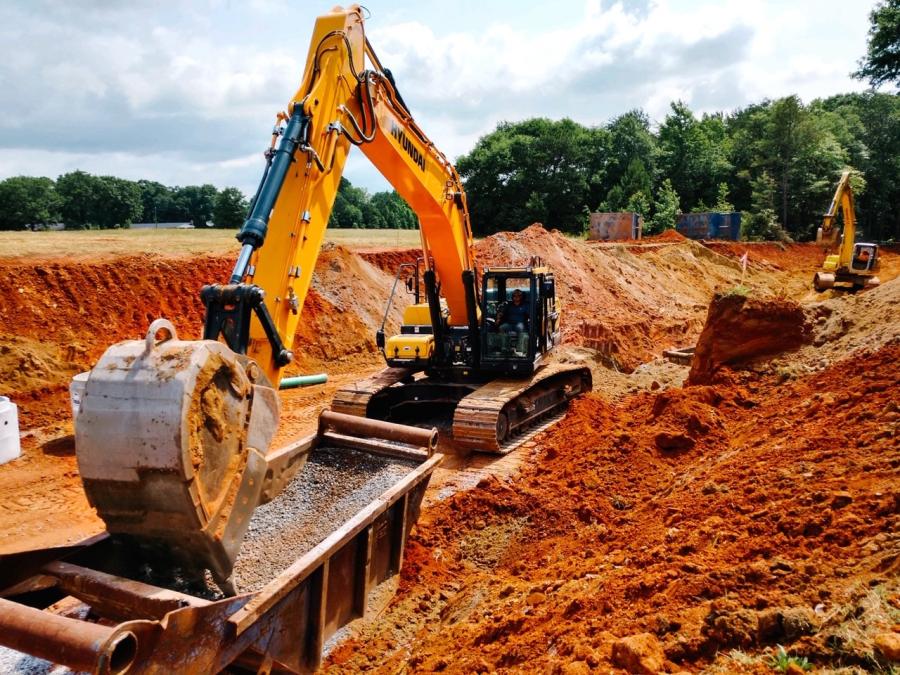 From MAY-RHI, the Ropers picked up two Hyundai HX145CR track hoes and one HX220 excavator.

They chose the Hyundai equipment, John Roper said, after using a larger excavator on a previous project.

"We had a job at Clemson University repairing a sewer main under one of its maintenance tunnels and we needed a machine that would excavate deeper," he said. "We had rented an HX330 with an extra-long arm on it. The job went well for us and we still had some time left on the first month's rent, so we took it to a sewer job that had 3,500 cubic yards of trench rock on it. It did well there, too, and I believe we rented it for another month. Then, we had a third project coming up where we didn't need a machine that large, so we worked out a deal with MAY-RHI to try a smaller Hyundai backhoe and ended up liking it. We tried out the Hyundai HX145 compact rig, rented it and then purchased it. Today, we own three Hyundai models."

Bobby Roper said the construction company found their latest Hyundai excavators to be more stable than other track hoes they demoed.

He is also appreciative of Hyundai's Hi MATE remote management system that gives owners and operators access, no matter their location, to vital service and diagnostic information for all Hyundai mid to large excavators and wheel loaders.

"The telematic systems were impressive, such as being able to clearly see how much hydraulic fuel you have, as well as to check on the power and speed," Roper said.

"It is all very convenient because Crayton Wilson set us up to use an app on our phone to see where our track hoe is at a given time, how it is being run, how many hours it is being run, whether operators are shutting it down properly, and when it should next be serviced," he continued. "The cab display is crisp and clean, especially when you have the camera on. Seeing a display more clearly is simply one of the little things that make a difference."

Each of the younger Ropers clearly enjoys their various roles within the family-operated business, which they been around their entire lives.

Bobby Roper described himself as a "kind of jack-of-all trades with the company. Project manager and estimator would be the best descriptions of what I do around here." 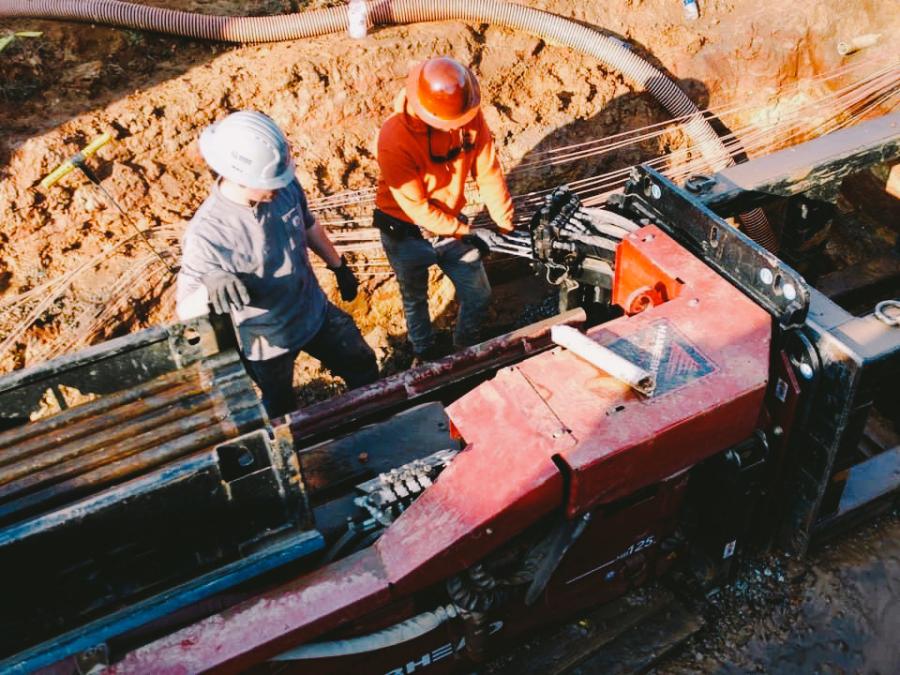 His brother, Brandon, and cousin, Jacob, both work as project superintendents. They enjoy being in the field and operating equipment.

As far as Elise, everyone agrees that her job is making sure things runs smoothly and efficiently with the business of Roper Brothers Inc.

"Elise heads up our building side," said Bobby. "To give you an idea of what she does, Roper Brothers is a licensed unlimited building contractor. We purchased this office last year, which used to be a bank. Elise handled all the construction, the permitting and the engineering with the drawings."

There is no real secret to beating the long odds of maintaining a family-run business for 35 years, said David Roper.

"I would say you have to put the money you make back into the company as much as you can," he said. "When we first started Roper Brothers, we took very little money out for ourselves and used what we could to get equipment to do more work. We realized, too, that our customers allowed us to be in business and keeping care of that customer base would be important. We been able to do that all these years."

John Roper added, "We realized, too, that our customers allowed us to be in business and keeping care of that customer base would be important. We have strived to do that all these years. We have also been blessed with great employees, other helpful contractors in the area, and people from our hometown who have all supported us along the way. We also must give credit to our mother, June, who spent 20 years working as our office administrator, and played a vital role in the success of Roper Brothers. We look forward to what this next generation brings to the table for the future of our company." CEG