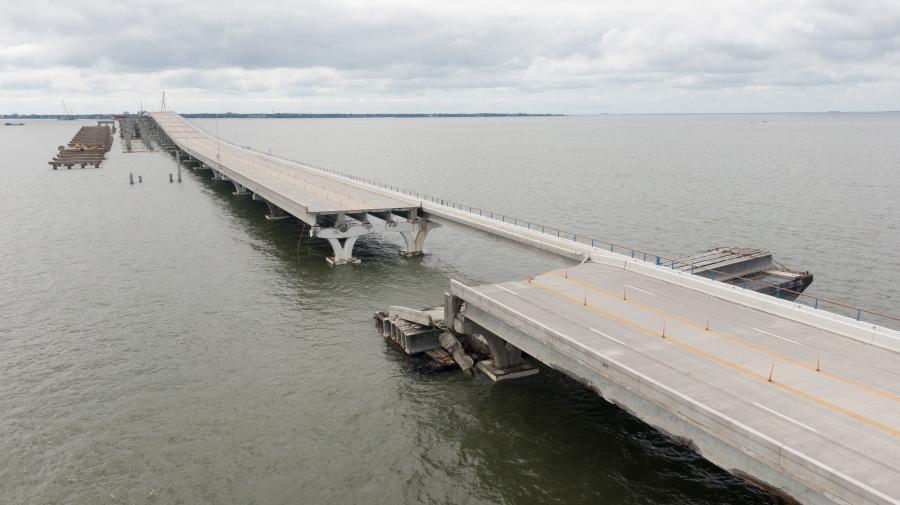 The far western area of the Florida Panhandle saw the most dramatic destruction from Hurricane Sally at the still-under-construction and partially-opened Pensacola Bay Bridge — the morning before the storm came ashore. (FDOT photo)

Hurricanes are often erratic by nature and their movements can be hard to predict. The amount of destruction they inflict on United States' coastal areas also is difficult to foresee.

A perfect example recently could be found in last month's Hurricane Sally. 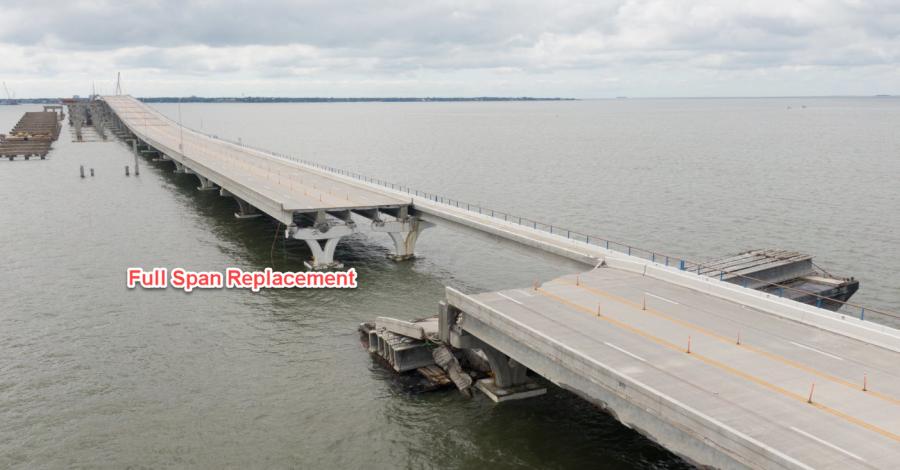 As the storm system slowly meandered north-northwest through the Gulf of Mexico after crossing the southeastern tip of Florida on Sept. 12, Sally began a period of erratic behavior. One day it would be a tropical storm, the next day a Category 1 hurricane, then strengthening into a Cat 2 storm, before weakening into a Cat 1 hurricane again as it approached the Gulf Coast states.

Ominously, when it did weaken, it also slowed considerably to where it was moving at only 2 mi. per hour. That meant predicted rainfalls and storm surge amounts would be heavy and long-lasting when over land — undoubtedly leading to destructive flooding.

But Sally's biggest surprise came at midnight on Sept. 16 when, just before it made landfall, the hurricane's eye rapidly became better defined and the storm began to re-intensify back into a Cat 2. In addition to strengthening, Sally abruptly turned onto a more east-northeast track.

A few hours later the hurricane finally made landfall at peak intensity near Gulf Shores, Ala., packing winds of 105 mph. And although Sally quickly weakened after creeping inland, the region was damaged by wind, storm surge and flooding in the coastal areas between Mobile, Ala., and Pensacola, Fla., which remained in the hurricane's northern eye wall for hours.

The communities in that region of the Gulf Coast from Mobile ended up taking the brunt of the hurricane. Local roads, bridges, seawalls and utilities also were damaged by the tempest — the total cost of which is still being assessed by federal and state officials.

And although not the most destructive storm to ever slam infrastructure in the Gulf States, there was one high-profile construction project affected that grabbed national headlines.

The far western area of the Florida Panhandle saw the most dramatic destruction from Hurricane Sally at the still-under-construction and partially-opened Pensacola Bay Bridge — the morning before the storm came ashore.

High winds and rough waters ahead of the hurricane caused 22 Skanska USA construction barges to break loose from their moorings around the bridge, with several striking the structure, which was nearing the end of a $430 million replacement project. 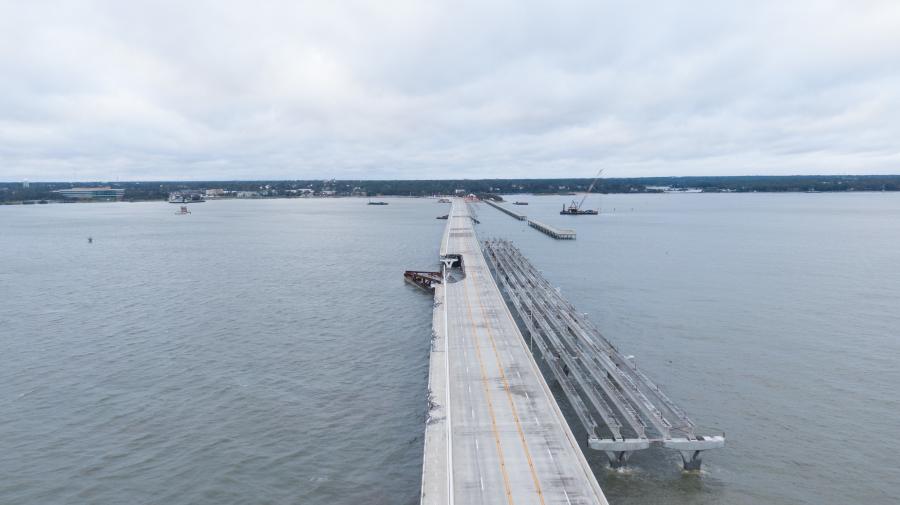 At least one barge wedged itself under the bridge, collapsing a section of roadway and forcing its immediate closure. No one was injured, but later engineering assessments determined that five of the structure's 105 spans were damaged beyond repair and needed replacing — two others require partial replacement.

Skanska confirmed that the loose barges were among a total of 55 such vessels moored at the bridge work site. The company began operations on the new bridge in 2017, which links Pensacola with Gulf Breeze along U.S. Highway 98, before opening the eastbound span last year.

If that were not enough, high winds also knocked over a large crane atop one barge and onto the Pensacola Bay Bridge, causing additional damage.

Most of the runaway barges washed up in and around the city of Pensacola, with many of those destroying docks, piers and seawalls on private property. Another drifted across the bay before lodging itself underneath the Garcon Point Bridge east of the span under construction.

The original Pensacola Bay Bridge replacement project was set to be finished next year and all traffic had been using the now-damaged span. But, with the entire structure currently closed to traffic following the accident, the Florida Department of Transportation (FDOT) said it will have to wait for final assessments before a repair plan is determined and a new date for opening the bridge is announced. In the meantime, detours have been put in place. 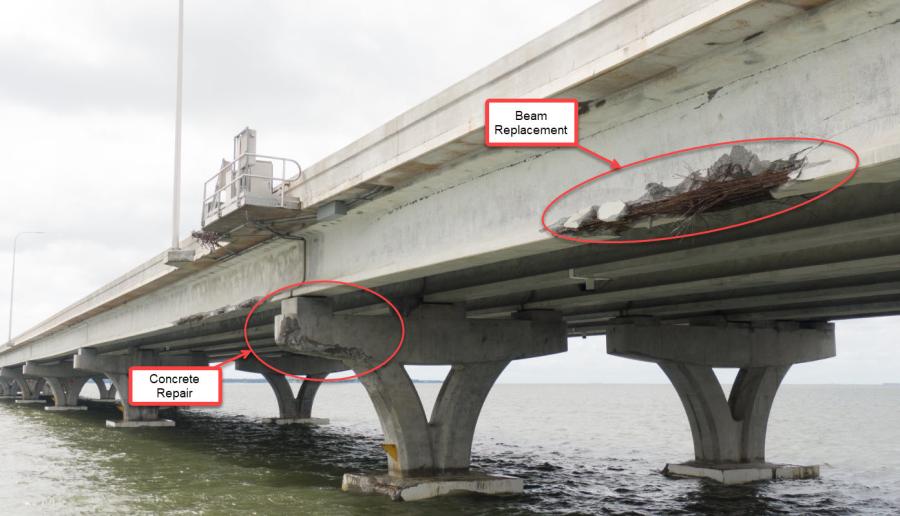 As soon as the hurricane's winds subsided, FDOT began sending teams of bridge engineers to inspect and assess the integrity of the Pensacola Bay Bridge.

FDOT divers examined 202 underwater footings by Sept. 28, with 22 more footings left to investigate for damage. Top side inspection teams checked on 105 spans, 202 piers and 525 beams supporting the 3-mi.-long bridge by that same date.

With examination nearly complete, demolition efforts began that day on the damaged areas of the bridge that needed to be cleared for dive access to those footings below the waterline. Skanska has brought in the resources to perform the demolition.

During their inspection of the Pensacola Bay Bridge following the barge collisions, state engineers found:

Three of Skanska USA's barges remain on or under the bridge structure, but the FDOT said in a news release that removal will be done with great caution.

"The design is under way for the permanent repairs and reestablishment of four lanes of traffic on the bridge," according to FDOT, adding the contractor has already fabricated 25 beams and the piers needed to begin repairs. In addition, Skanska has started building "more replacement beams and piers at its offsite yard and has reached out to other facilities to assist in production."

Elsewhere in the Pensacola area, as much as 3 ft. of rain fell during Hurricane Sally's passing and, in the city itself, storm surge flooding reached 5.6 ft., the third highest surge ever recorded there. Also, parts of Interstate 10, as well as the Escambia Bay Bridge over which it travels east of the city, were shut down until flood waters receded. In addition, the I-10 freeway over the Shoal River in Okaloosa County was closed due to rising waters before the FDOT could inspect any damage there.

More than 500,000 local power customers in Louisiana, Mississippi, Alabama, Florida and Georgia lost electricity before the storm moved out of the region. 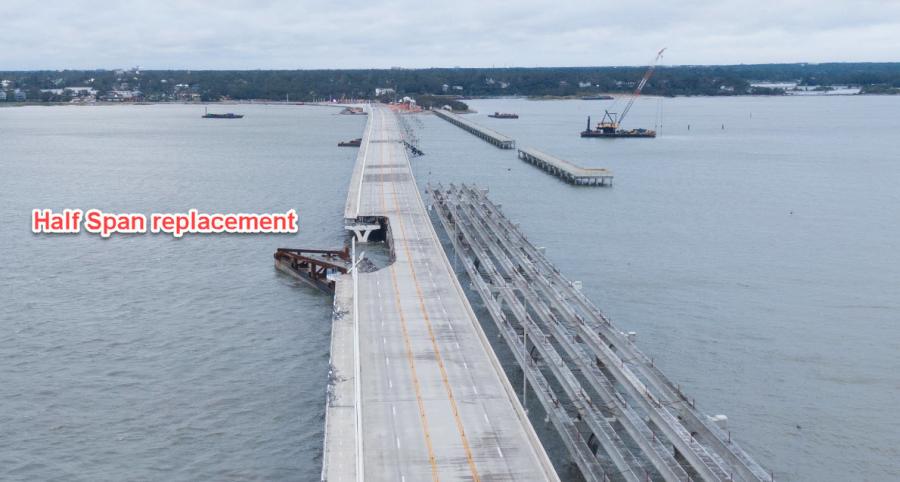 Although Sally was predicted to make a landfall in Louisiana, the storm veered just enough to the east to spare the hurricane-plagued state most of its damage. The same was true in Mississippi where only moderate flooding and power outages were reported.

The damage was more severe in the Mobile Bay region of Alabama, along with the state's Gulf communities where Sally first hit. Storm surge flooding occurred on Dauphin Island, near the entrance to the bay and a pair of unoccupied riverboat casinos in Bayou La Batre near Mobile broke loose, with one slamming into a dock. Major structural damage was recorded in Gulf Shores, as well as in Mobile. A pier in Gulf Shores that was smashed in 2004's Hurricane Ivan was partially destroyed again by storm surge from Sally just days after it had reopened following renovations.

More than 2,000 broken utility poles and 4,300 trees on power lines immediately left more than 71,000 households and businesses in southern and central Baldwin County without power, representing almost all of Baldwin EMC's service area. By the last few days of September, the electrical cooperative announced it had restored power completely to more than 80,000 customers.

As it moved further inland, Hurricane Sally caused more high-water problems and even some tornadoes in Georgia and South Carolina. The storm finally broke apart over the coasts of the two Carolinas before moving out into the Atlantic Ocean Sept. 18. CEG