After bringing his wife with him to Knoxville, Tenn., Harry Hernandez decided that having lived and worked in his native Venezuela, as well as Florida, eastern Tennessee was the best place for his young family to grow and thrive.

He also found Knoxville a good place to locate another branch of his prospering multi-state salvage operation, locally known as Tennessee Auto Salvage & Recycling. It complements his other facilities in Miami and Tampa — so well, in fact, that while he runs one scrapyard in Knoxville, his brother operates another operation across town. 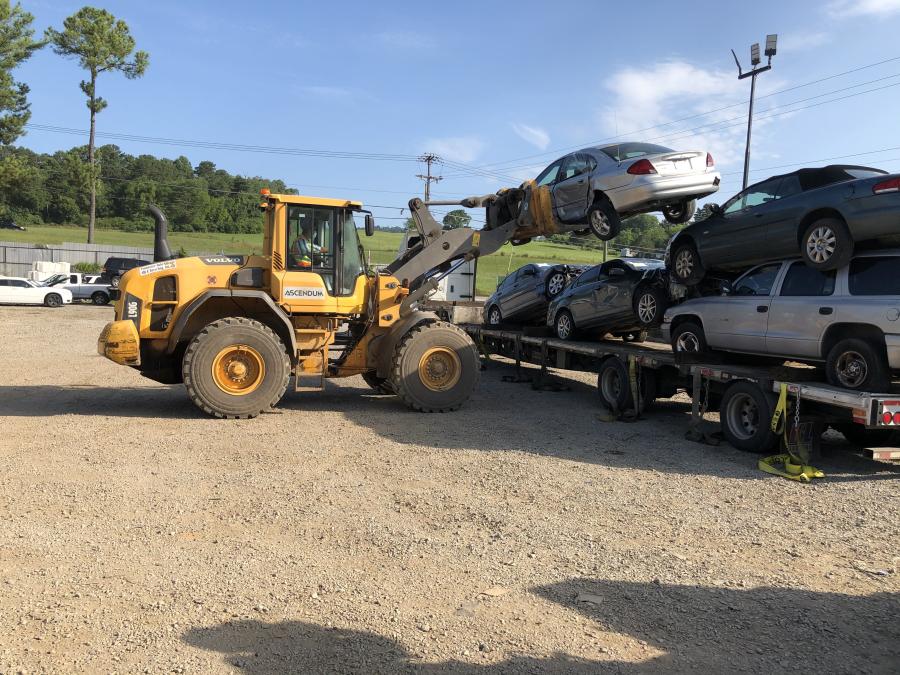 Hernandez said he got in the scrap and recycled materials business because he had been exporting merchandise from the United States to Venezuela. Those materials come in from a variety of locales, including Chicago, New York, New Jersey, Miami, Orlando, Tampa and Knoxville.

"When I came here with my wife [from south Florida], we also went to the Great Smoky Mountains and to Gatlinburg," he said. "She fell in love with the city of Knoxville. We have two daughters, ages 13 and 7, and she felt it was better for them to grow up here than in Miami. So, we decided to move here and start a business, first loading containers before operating a junkyard."

That was in 2013 and since that time, Tennessee Auto Salvage & Recycling has become a recognized specialist at providing excellent recycled automotive parts to most areas of the eastern United States and to South America. The materials handling company buys junk cars, old batteries, aluminum, steel, brass, copper and used parts, such as usable engines, transmissions and vehicle bodies.

Tennessee Auto Salvage & Recycling backs its parts with an industry-standard 30-day warranty and offers nationwide delivery with UPS and other regional freight carriers.

"We are continuing with the used parts because we started with that business, but now we are into the scrapyard where we recycle damaged cars or, cars that don't work, by dismantling them," Hernandez said. "Then, we take out the aluminum, the iron and the scrap for recycling."

One of the keys to keeping Hernandez's scrapyard running efficiently is in his choice of equipment to move materials precisely where they are needed. 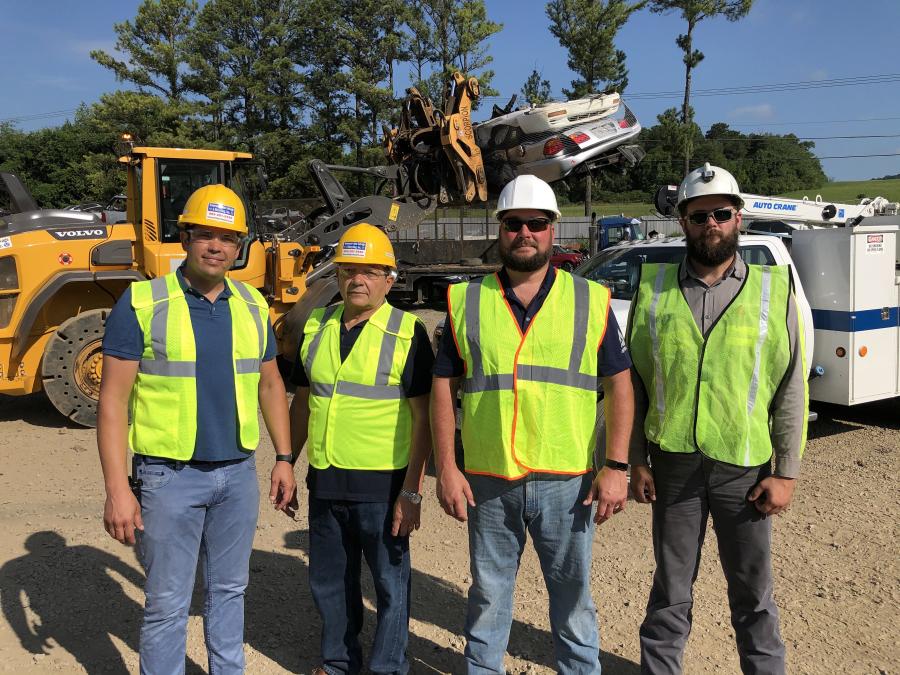 For that reason, he has chosen to buy Volvo machines from the Knoxville location of Ascendum Machinery, conveniently located on the same street as Tennessee Auto Salvage & Recycling. Ascendum is the full-service dealer of Volvo Construction Equipment.

"We started with Volvo and Ascendum in 2013 with an L70B wheel loader," he said. "I think it was a 1996 or 1997 model, but that was a great machine for us. The best one I have right now is a Volvo L90H and it is just as great as the older one. With the new L90H, all we have had to do is pour in oil and diesel and it is ready to roll. That's why I stay with Volvo. The [manufacturer] got my attention because I saw how other big companies use it, like CMC Commercial Metals here in Knoxville, and I know that Volvos run strong and the service is good. Every time I call Volvo here, the guys come take care of any problems."

As an example of Ascendum's exemplary service, Hernandez said that last year, Tennessee Auto Salvage & Recycling had an issue with its old Volvo L90G machine. After quickly coming to his scrapyard and checking over the loader completely, he decided that with all the hours he had put on the L90G, it was time to trade it in to Ascendum for a new model and new warranty.

He also is very complementary of the attention he receives from Wes Wilber, his account manager at Ascendum's Knoxville location.

"Each time I call these guys at Ascendum, they come and see what the problems are, and we go from there," Hernandez said. "And, you know, in this business, time is money. If the service is quick, you never see the loss because you can continue with the production. That is very important to me and everybody in this business." 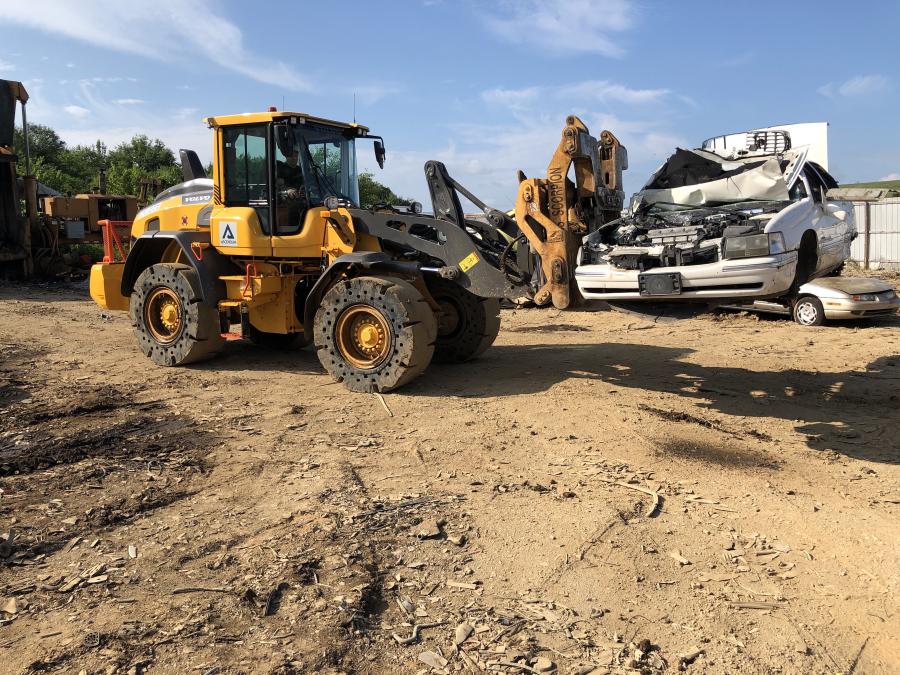 Across Hernandez's five-scrapyard business, there are five Volvo machines in operation, including a total of three loaders: the models L70B, L90G and L90H, as well as a pair of EC160EL excavators. He equips his loaders with SAS Scorpion Engine Puller fork attachments, adept tools in separating an engine or transmission from an old vehicle in under 30 seconds before hauling it wherever the Volvo loader's operator wants to place it.

"The Volvo cab is great and the machine itself is powerful," he said. "It is like driving my Mercedes-Benz because I feel safer and it is more solid. I have tried the other machines and the Volvo is just better and has a more stable feel.

Hernandez said the Volvo machines he employs are big reasons for the health of his scrapyard's bottom line. In Knoxville alone, he noted that the company handles approximately 4,500 tons of material per month. CMC Commercial Metals, for one, buys scrap from his company.

Just down the road is Ascendum Machinery's Knoxville-area dealership at 5730 Rutledge Pike. For more information, call 865/525-1845 or visit www.ascendummachinery.com. The Knoxville location is one of more than 15 locations across the Southeast and North Dakota. With 60 years of experience, Ascendum has the solutions its customers need at the price point they want, according to the company, adding that with a dedicated and knowledgeable staff, it is committed to maximum uptime, quality service and parts availability. CEG