Along the way, expenditures as low as $397 for signage to the $42,058,158 price tag to complete the actual building construction have all been accounted for and tallied. 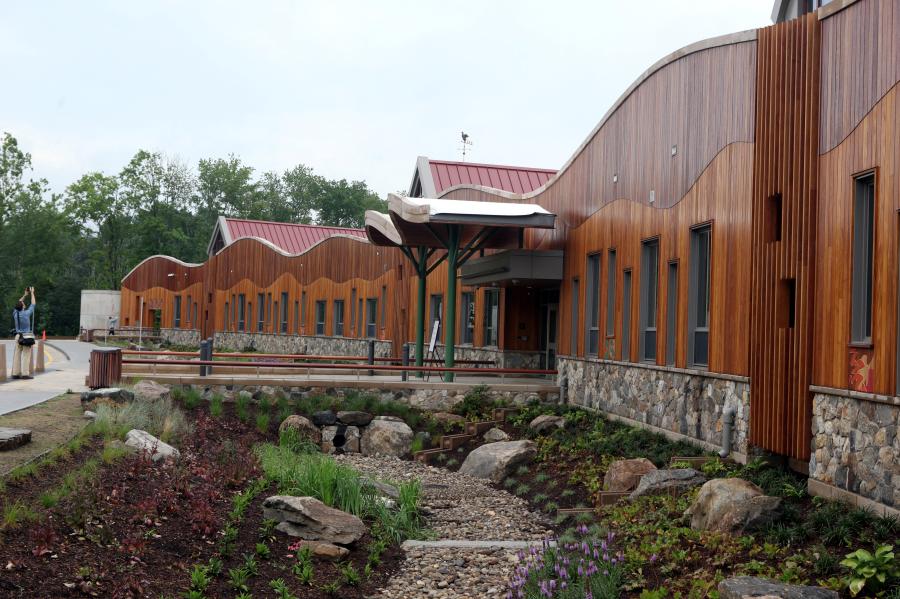 From its earliest days as conceptual drawings, until early August, when Newtown's Public Building and Site Commission (PBSC) officially closed out the Sandy Hook Elementary School building project, the state-of-the-art educational facility has represented something eminently important for virtually every person who played a role in its construction — including taxpayers across Connecticut whose $50 million contributed to its completion.

From its earliest days as conceptual drawings, until early August, when Newtown's Public Building and Site Commission (PBSC) officially closed out the Sandy Hook Elementary School building project, the state-of-the-art educational facility has represented something eminently important for virtually every person who played a role in its construction — including taxpayers across Connecticut whose $50 million contributed to its completion.

Now those state taxpayers can be the beneficiaries of Newtown's thrifty stewardship of their hard-earned contributions as PBSC Chairman Robert Mitchell informed The Newtown Bee, August 8, that the project has come in $1.5 million under budget.

Along the way, expenditures as low as $397 for signage to the $42,058,158 price tag to complete the actual building construction have all been accounted for and tallied. While nobody from town will actually be traveling up to Hartford to hand state officials back a big check, the news puts some positive closure to a project that nobody ever wanted, nor wished ever had to happen.

"This represents funding that was authorized for the project, but never had to be bonded," Mr. Mitchell explained while reviewing the history and details of the project that he and his commissioners spent countless volunteer hours shepherding through its hybrid processes.

It was an eventuality that First Selectman Pat Llodra and the entire building and design team expected, and vowed to see happen.

"From the very outset the project team knew and was frequently reminded by me that the goal was to build the new school on time and under budget," Mrs. Llodra said. The first selectman said that everyone involved was careful with resources, and was always respectful that the privilege to create a brand-new school following the December 2012 tragedy and demolition of its decades old predecessor came as a gift from all state taxpayers.

"We rejected any attempt to spend more than was necessary to accomplish the task," Mrs. Llodra said. She said throughout the final six months or so of the project, she would remind the team at the weekly meetings that the goal was to come in under budget.

"The construction management folks, owner's rep, designers, PBSC — everyone recognized that spending below the limit of the grant was to be a small token of thanks to the state and evidenced our respect for all that had been done for us," Mrs. Llodra added. "The owner's rep in particular [Geralyn Hoerauf] did an excellent job in tracking costs and keeping us informed with weekly updates."

"The team connected to the build and the design was an assembled collective group of highly skilled professionals," said Dr. Erardi. "Bob Mitchell was the glue to highly complex puzzle…..it was only a privilege to work with this team."

Mr. Mitchell said the hybrid nature of this project, which was for the first time in state school construction history handled like a commercial versus state/municipal facility, was challenging from the onset with demolition and site prep beginning before architectural planning was near completion.

"Because of the funding mechanisms, it was a complication we just had to get through," Mr. Mitchell said, relating how many of the documents that would normally have to be completed ended up going back to the state peppered with notations that repeated, "Does not apply."

"To their credit, and due to the nature of this project, state officials were amenable to doing things they had never done before," the PBSC chairman said. "Even at the earliest stages when we were working to select the architect and construction manager, it was much more like an audition process than picking vendors — and opposed to virtually every other state bonded construction project that came before it, the cost or price tag on the job was not a driving factor."

Mr. Mitchell said from the onset, it was more important to bring together team members who could work cooperatively and complementary on the project. But it was not just the design and construction team leaders who contributed to the eventual $1.5 million in savings.

"One day each month, we would have a big lunch with all the members of the crew, and during one of those I overheard one of the frontline workers pointing out what he thought was a very complicated way to address some of the steel framing," Mr. Mitchell recalled. So after suggesting the worker approach a construction management representative with his concerns, the solution the worker suggested ended up being applied.

"That one suggestion made that entire part of the job quicker, easier, and a lot less expensive," the public building chairman said. "That was just one of countless ways we tried to get everyone on site involved in the project, and as a result, cooperation on the site was extraordinary. Obviously because of the nature of this project, it was important to everyone, but to see the various crew members with Sandy Hook School logos on their hard hats, and wearing Sandy Hook School shirts on the site was incredible."

Another budget-smashing aspect of a typical public building project is change orders, deviations or additions to existing and budgeted plans that need to for myriad reasons be modified at the owner's expense. But Mr. Mitchell said that in the end, the SHES project only generated 1.69 percent of its overall budget for change order expenses.

"Typically, bringing that in under five percent is considered excellent," he said. "But it showed that throughout the process, when we encountered an issue, instead of just spending money to fix it, we'd stop and think about how to solve the problem without spending any more money. Our entire contingency could have easily been spent on change orders, but we were all committed to not spending any money we didn't plan on."

From a larger perspective, the $1.5 million state taxpayers will not have to underwrite for the SHES project is just the beginning, Mr. Mitchell said. Because of the successful administration of this school project, many if not all similar state projects going forward will select their construction, engineering, and design vendors based on qualifications, inevitably saving the state many millions more in the future.

"And now that has become Newtown's standard practice for all future building projects," he said. "Now we ask for costs after the final vendors' list is refined."

Among the largest areas of savings on the project turned out to be for the structural steel and fabricating, Mr. Mitchell said. A number of innovations, once explored thoughtfully, ended up costing about the same, or less, than less desirable or attractive or practical features.

"Look at the cafetorium with its wonderful acoustic tiles," he said. "That could have ended up being a plain drop ceiling, but when we researched other options, we came up with the current design and the added cost was negligible; and it makes such a huge practical and aesthetic difference."

The popular lobby "skybridge" was another feature that was originally on the hit list to be scrapped and replaced with a conventional hallway. But when the design team did a little research, they discovered the skybridge would end up being measurably less expensive.

"Once the school opened, students told us that besides the cozy meeting room 'tree houses,' they liked the skybridge the best," Mr. Mitchell said.

He also had high praise for the outside owner's rep Ms. Hoerauf.

"She became the town's liaison with the state, and Geralyn made life so much easier by helping anticipate things that could have ended up costing us a lot more money," he said.

He said because of the countless fresh views that so many workers brought to the SHES project, "we got so much more out of it than we put into it."

Affirmation of all the hard work and relevant savings that resulted arrived at the school in the form of a handwritten note on August 4 from a visitor who stopped in to see the finished product during a recent visit to Connecticut from Thousand Oaks, Calif.

The note, signed only with the name "Linda," read in part: "On 12/14/12, never did I dream that any new construction could ever heal or inspire the hearts of Newtown, let alone an entire nation. In my entire life I have never seen a most uniquely beautiful and awe-inspiring school…or any structure for that matter. This is a school built with courage, conscience, and compassion."