Completed in 1973 after a decade of construction, it sees an average of 24,000 vehicles per day. 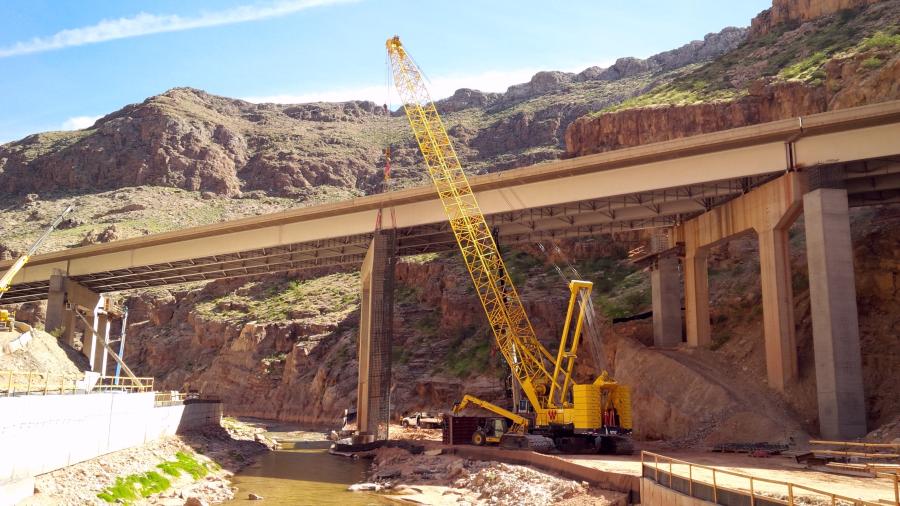 Arizona DOT photo. This picturesque pass through the Virgin River Gorge begins at “The Narrows,” with its limestone cliffs towering 500 ft. (152.4 m) above the highway.

A 29-mi. (46.7 km) stretch of Interstate 15 through Arizona is a heavily-traveled commercial route between Nevada and Utah — an economic corridor effectively linking southern California with the Rocky Mountain region that sees more than 1.4 million commercial trucks each year.

When this section of highway was built, it was the most expensive interstate freeway ever built, per mile. Completed in 1973 after a decade of construction, it sees an average of 24,000 vehicles per day.

It has been hailed as the most scenic highway in the state, traversing the northwest corner just south of the Utah state line as it winds along the Virgin River, a tributary of the Colorado River. This picturesque pass through the Virgin River Gorge begins at “The Narrows,” with its limestone cliffs towering 500 ft. (152.4 m) above the highway. Along this passage that climbs northbound, five bridges cross the river.

Arizona Department of Transportation has been upgrading these structures after a study they and the Federal Highway Administration conducted identifying potential improvements to or repairs of mainline bridges throughout the corridor. Operational, capacity and safety improvements to I-15 for the entire corridor also will be investigated. These investigations include possible shoulder improvements, rockfall containment enhancements and new climbing lanes.

Identified in the study were bridges 2, 3, 6 and 7. Last year, a $2.8 million project to rehabilitate several southbound bridge surfaces on bridges No. 2, No. 3 and No. 7 was completed. A more extensive rehabilitation project on No. 6 was begun last year; it includes replacing the bridge's superstructure (girders, deck and railings), as well as widening the roadway through the narrow passage of the scenic Virgin River Gorge.

Another bridge identified in the study is currently undergoing a $27 million rehabilitation. Bridge No. 1 is considered an important element of I-15, providing a vital link between California, Nevada, Arizona and Utah.

“This extensive rehabilitation project will include the replacement of the bridge's superstructure (girders, deck and railings), as well as widening the roadway through the narrow passage of the scenic Virgin River Gorge,” explained Dustin Krugel, public information officer of ADOT Communications. “While the bridge is still considered safe for travel, it requires extensive refurbishment to continue serving the substantial volume of traffic along the I-15 corridor.”

Funded through state and federal highway funds and a $21.6 million federal grant in the fourth round of the U.S. Department of Transportation's Transportation Investment Generating Economic Recovery (TIGER IV) grant program after the states of Nevada and Utah lent their support, the project commenced in spring 2014 and is anticipated to be completed by summer 2016.

When the project began in spring 2014, I-15 was narrowed to one lane through the work zone because alternate routes are limited due to the remote location of the I-15 Virgin River Gorge corridor. In order to accommodate drivers and reduce traffic delays as much as possible, crews are working a modified, rotational 40-hour-week schedule that encompasses typical hours Wednesday through Saturday, off Sunday, then Monday through Thursday, with Friday through Tuesday off.

This work schedule was modified to better accommodate most of the team members involved, who are mostly comprised of out-of-town residents, he continues.

“By moving to this schedule, it allowed personnel, who live as far away as Tucson, Phoenix and Flagstaff, to travel and have a normal weekend.”

It's an inspired schedule to accommodate the average daily personnel count of 60 (although that number swells to greater than 90 during milestone events, such as a concrete deck pour), which includes all craft, supervisory (ADOT and contractor), ADOT maintenance, Department of Public Safety, quality control, quality assurance, environmentalist, clerical and subcontractor personnel.

Before men and machinery could be put in place, they had to get to the job site. The section of I-15 in the Virgin River Gorge is an extremely curvy section of freeway, which winds its way from Utah to Nevada in Arizona through vertical canyon walls and solid rock. Along the freeway's path, there are seven bridges that span the Virgin River's crossing beneath it.

“Our reconstruction project is situated where access and working area are extremely limited,” said Erik Wolf, project manager of Wadsworth Brothers. “An access road had to be constructed to allow equipment, materials and personnel to travel to the area beneath the overhead bridge and perform the work.”

Because the elevation drop from top to bottom is roughly 100 ft. (30.5 m), a steep construction road was installed.

Because the working height of the bridge is only about 100 ft. above the Virgin River below, every safety precaution possible was implemented on and around the bridge to ensure the safety of all, including the traveling public, during construction, Wolf added. “Tens of thousands of vehicles per day travel this section of freeway.” A larger than normal percentage of this traffic includes heavy trucks.

To ease traffic problems, the project employs multiple full-time traffic control supervisors; utilizes the assistance of the Highway Patrol; implements temporary construction barriers and devices; and enforces a reduced speed zone through the construction zone to ensure safety of both construction personnel and the traveling public.

A River Runs Through It

Wolf said that reconstructing a bridge and highway that crosses the highly sensitive Virgin River has been a very daunting task from the beginning.

“Each step of the work had to be coordinated with ADOT, as well as environmental agencies such as the Bureau of Land Management, Arizona Game and Fish, Department of Natural Resources, Environmental Protection Agency and others,” he said.

Personnel from these agencies were involved, both during design and construction, to ensure that all matters of the work were performed in harmony with nature because the project location is situated in an area where there are multiple endangered species. Thus, every precaution was implemented to ensure the construction activities were environmentally compliant.

But no one can control the weather, and this area is known for weather extremes where temperatures can range from below 30 degrees Fahrenheit in the winter to more than 115 degrees in the summer. Wind gusts passing through the area have been recorded at more than 70 mph.

“Throughout the course of the project, we have experienced multiple days of severe weather that led to flood water levels rising multiple feet per hour, wind and rain that enabled rock to fall from canyon walls overhead, snow, sleet and tortuous heat,” Wolf recalled. The GC overcame these difficult conditions by providing all personnel with water and ice, but Wolf credits the determination of each team member and their passion of completing this flagship project as the driving force.

One of the more difficult aspects of the project was installing steel girders. Installing them on any bridge is a task that takes coordination, patience, a skilled workforce, precision and the necessary equipment, Wolf acknowledged, but if you add in the difficult logistics of this project, where the work needs to be conducted from 100 ft. below the final placement and around a river, this monumental task becomes exponentially more challenging.

“These steel girders, each weighing up to 87,000 pounds, had to be carefully lifted, with two 250-ton lattice boom crawler cranes, and moved into place,” he said.

To prepare for placement, a three-dimensional model was constructed of the project site and existing conditions prior to performing this task, which then was further expanded to detail and diagram a critical lift plan, showing where each crane had to be setup and how each would travel while lifting the steel girders.

“The pre-planning of this work allowed us to complete this task quickly, efficiently and safely,” Wolf stated.

This project is one of ADOT's first “Construction Manager at Risk” projects. The alternative delivery method was used to process the environmental clearances alongside the design. Wolf explained that without this approach, the team would not have been able to utilize the TIGER grant funding that was awarded.

Work is currently on track for completion this summer.