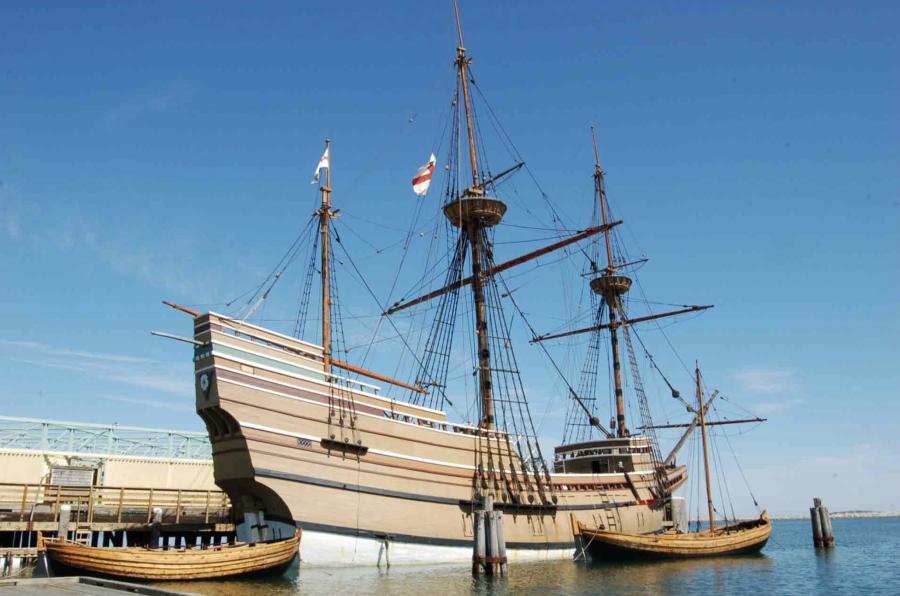 The Mayflower II, which was built in 1957 and is a major tourist attraction on the Plymouth, Mass., waterfront, is now at the Seaport undergoing a 30-month restoration.

The massive live oak trees in Diane Brugger's yard in Pass Christian, Miss., have been life-altering.

After the raging waters of Hurricane Katrina swept her stately three-story inn off its foundation, Brugger found herself clinging to the limbs of two of the centuries-old trees. Her husband had been swept away and killed, and she stayed in the trees for hours, awaiting rescue.

Now, after lightning struck another of the oak trees on her property, Brugger wanted to make sure that tree went to good use and to honor the legacy of her late husband, Tony, a boat lover.

In March, crews led by Mystic Seaport Shipyard Director Quentin Snediker took down the 200-year-old oak in Brugger's yard, and put it on a truck back to Mystic Seaport, where it will be shaped into pieces needed for the ongoing restoration of the Mayflower II, the replica of the ship that brought the Pilgrims to America in 1620. The ship is owned by Plimoth Plantation in Massachusetts.

“We didn't want it to go to a landfill. We wanted it to go to good use and not be wasted,” Kathy Volkman, Brugger's daughter, said about the tree.

She said that, after the tree was struck by lightning eight months ago, her mother, a history buff, heard about the Mayflower project from a friend in Connecticut and offered her tree.

That's when Brugger decided it would be a way to honor her husband, a former Marine and Navy reservist who had a lot of interest in old boats. Volkman said her mother had planned a surprise 65th birthday party for her father aboard a local schooner, but he was killed before the trip could take place. Brugger has since rebuilt a small bed-and-breakfast operation on the site of her destroyed inn.

With recent media reports of the tree going to help rebuild the Mayflower, Volkman said her mother has been receiving calls from other people who want to donate their trees as well.

That's good news for Snediker, who has developed a network of people across the southeastern United States who help him identify and acquire wood, especially a species known as live oak. The wood, particularly in large sizes, is prized for fashioning the planks, stems and knees needed to rebuild wooden ships.

In addition to the current work on the Mayflower, Snediker has used his network to acquire wood for the construction of the replica of the schooner Amistad and, more recently, the restoration of the whaling ship Charles W. Morgan. Some of the wood used to rebuild the Morgan came from trees felled by Katrina.

Snediker explained that “live oak is highly sought after in wooden shipbuilding because it is very dense, hard, and resists rot better than almost all other species in North America.” He added, “The crooks and curves typical of the trees are ideal for the fabrication of many of the structural parts, as there are few straight lines and right angles on a wooden ship.”

Snediker was in Pass Christian to see the wood from Brugger's oak tree being loaded onto a truck. He was then off to Belle Chasse, La., where Whit Perry, Plimoth Plantation's director of maritime preservation and operations, and Matt Barnes, the Seaport's lead shipwright on the Mayflower project, were overseeing the cutting and loading of trees being taken down to make way for power lines.

The landowner, Sam Bordelon, said that seeing the trees used for the Mayflower restoration was “a redeeming outcome,” according to a statement from the Seaport and Plimoth Plantation.

“The people here really love these trees. They have a great attachment to them,” said Snediker. “These trees are beautiful, they're part of the culture and they mean a lot to the community.”

Snediker said that, in all, three truckloads of wood weighing 100 tons will soon arrive in the Seaport shipyard, where they will be sawed into the shapes that are needed.

The Mayflower II, which was built in 1957 and is a major tourist attraction on the Plymouth, Mass., waterfront, is now at the Seaport undergoing a 30-month restoration. Work is scheduled to be complete in time for it to sail again on the 400th anniversary of the Pilgrims' voyage.