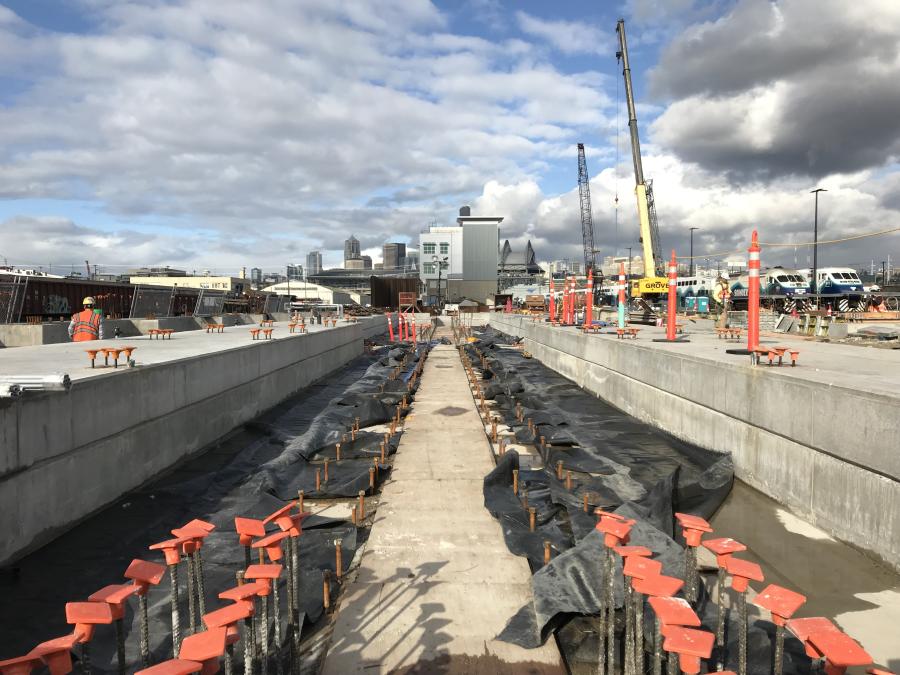 When completed, the new maintenance service facility will be 80 ft. wide, 53 ft. tall and 325 ft. long and have two rail lines inside the building so the locomotives can be driven inside the facility. (Amtrak photo)

With the piling work completed for the new Amtrak locomotive service facility, crews are now pouring its concrete foundation and installing the underground mechanical, electrical and utilities. Although the project is only 38 percent complete, construction is ahead of schedule.

“We're scheduled to turn over the building to Amtrak at the end of next January,” said Cody Glasgow, project manager of PCL Construction.

The $28 million locomotive service facility is the latest upgrade Amtrak is making at its Seattle King Street Coach Yard Maintenance Facility. The railroad's maintenance needs are expected to increase in the future, not only to maintain its current long-distance trainsets that run to Chicago and Los Angeles (the Coast Starlight and the Empire Builder), but also to support the Sound Transit commuter rail service and the state-sponsored Amtrak Cascades trains. Amtrak has long-term contracts to maintain the locomotives for these services.

“We have used [the building] that we had available, but it was never designed for servicing locomotives,” explained Dan Radeke, project manager of Amtrak. “For example, it does not have a drop table to change out traction motors, and it doesn't have an overhead crane for doing overhead work.”

Currently, light maintenance is done in several locations throughout Seattle, but locomotives that require heavy maintenance are sent to Los Angeles.

PCL Construction was awarded the design-bid-build project and received notice to proceed on May 24, 2017. This isn't the first Amtrak project the company has undertaken at the Seattle King Street Coach Yard Maintenance Facility. In 2012, the company was awarded the $50-million-dollar project to construct a new administration building, and maintenance and equipment buildings; this design-build project won the Design-Build Institute of America 2013 National Honor Award in the Industrial/Process/Research Facilities Category.

“What attracted us to working with Amtrak again is that their staff are excellent to work with,” said Glasgow. “They have a partner mentality in how they operate through this challenging build, which is great because it aligns with our goals to complete this project in the most efficient and successful manner possible.” 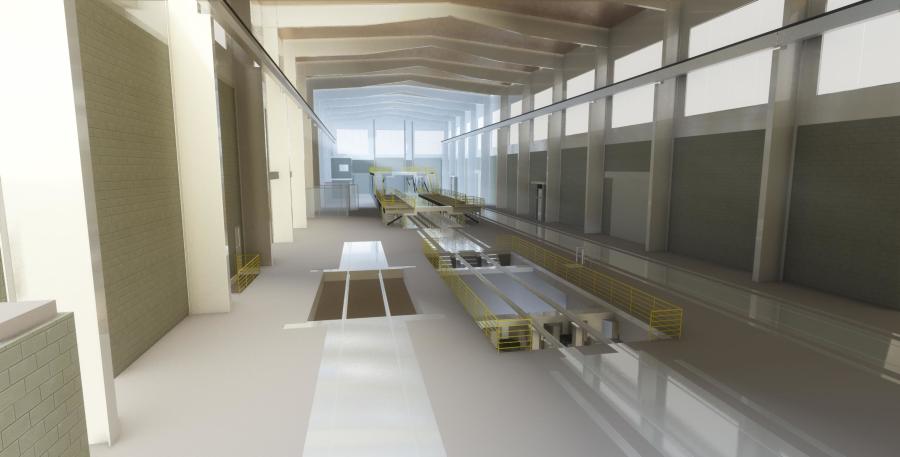 Once constructed, the new maintenance facility will be 80 ft. (24.3 m) wide, 53 ft. (16.1 m) tall, and 325 ft. (99 m) long and have two rail lines inside the building so the locomotives can be driven inside the facility. One crucial maintenance feature will be the drop table, which is housed in a pit and raised underneath the locomotive so the mechanics can replace the combined axles and traction motors of the locomotives.

The building also will have a 55-ton (49.9 t) bridge crane to facilitate the easier movement of locomotive parts from one end of the building to the other. And there is one design element that excites Glasgow.

“One unique aspect about the design of this project is the covered canopy section of the building,” he said. “The whole building isn't enclosed. There is a 60-foot (18.2 m) area that acts as a large carport with a large in-swinging door. Through that door the overhead bridge crane can travel outside the building to the carport.”

Radeke said with regards to the new building: “We're very excited to have a new locomotive shop that will allow our employees to work more efficiently and in the safest environment possible. We are looking long term, at least 25 to 30 years out ahead. It can handle our needs for that time.”

The 32,000-sq.-ft. (2,972.9 sq m) maintenance facility is being constructed on the site of the 1970s' era building that was demolished as part of the project. Because there was non-friable asbestos caulking in the metal structure and the concrete joints, Glasgow said they followed state regulations during the demolition, which included the use of water hoses to keep the dust and debris down. 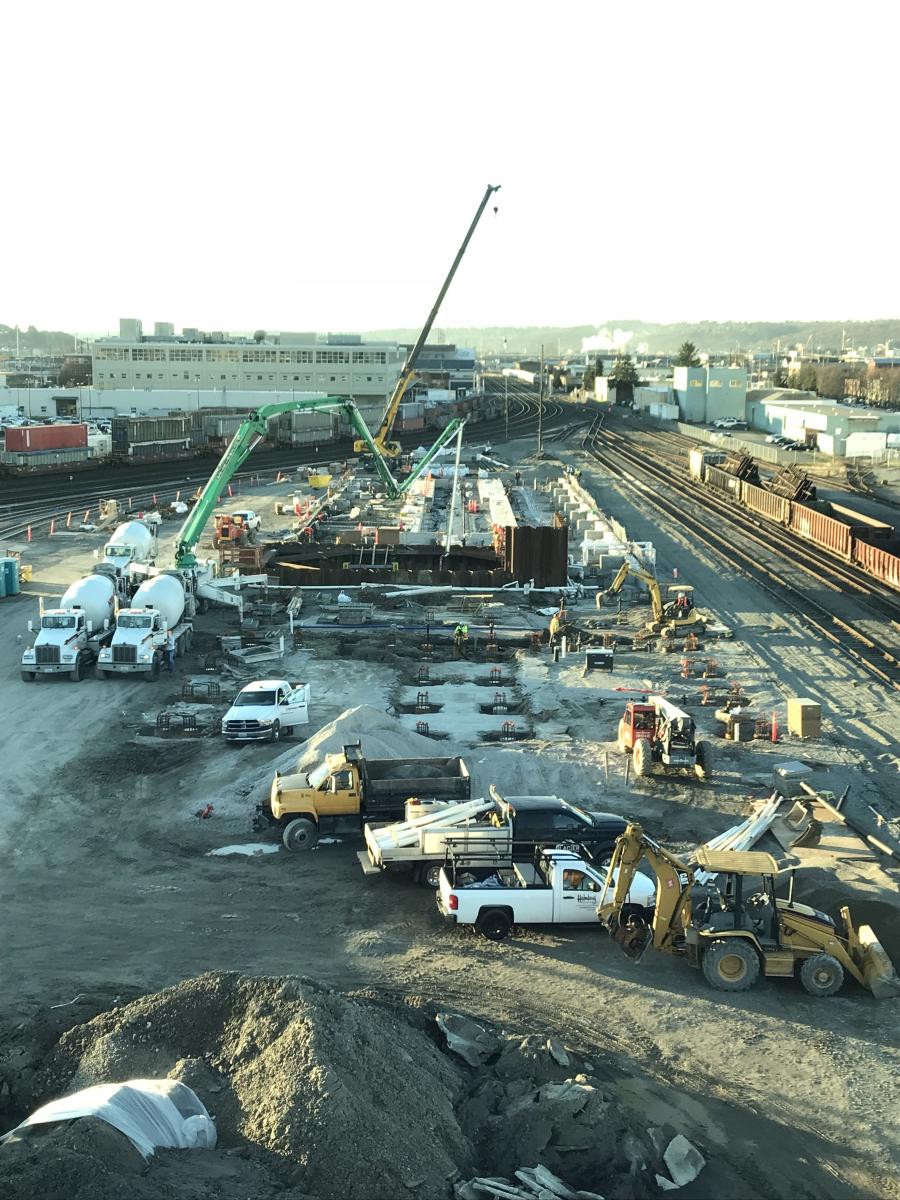 Supporting the new structure are 178 pipe piles that were driven down to 200 ft. (60.9 m) below grade, and it took nearly three months to complete this work.

“The depth of the piles was directly related to the poor onsite soil-bearing capacity at shallower depths, in addition to meeting stringent seismic structural design criteria,” Glasgow explained.

In total, around 35,000 linear ft. (10,668 m) of 24-in. (.6 m) diameter steel pipe was used. And with the water table 8 ft. (2.4 m) below grade, crews had to build a sheet pile excavation, which was installed by a vibratory hammer, and install dewatering wells in order to excavate the drop table pit. Unlike other PCL work sites, where the steel pipe would have been trucked in, on this project the materials arrived a different way.

“Building in a rail yard has its benefits. We were able to work it out with Amtrak to have the steel pipe delivered by rail directly to the job site,” Glasgow said.

Although he admitted there were challenges to having so much material delivered at once, they worked with Amtrak and the pile contractor to find the extra storage space and it was easier to have surplus material on hand.

“Once we finish construction of the drop pit, we will remove the sheet piles out of the ground and decommission the dewatering wells,” he said, adding, “the building and that drop pit is designed for the hydrostatic pressure that will be present with the current ground water conditions.”

Although the finished structure will be a pre-engineered metal building, the first 20 ft. (6 m) of the walls will be concrete masonry units. In May, crews are expected to begin construction of the building and complete their work in August, after which the interior electrical and mechanical work begins. 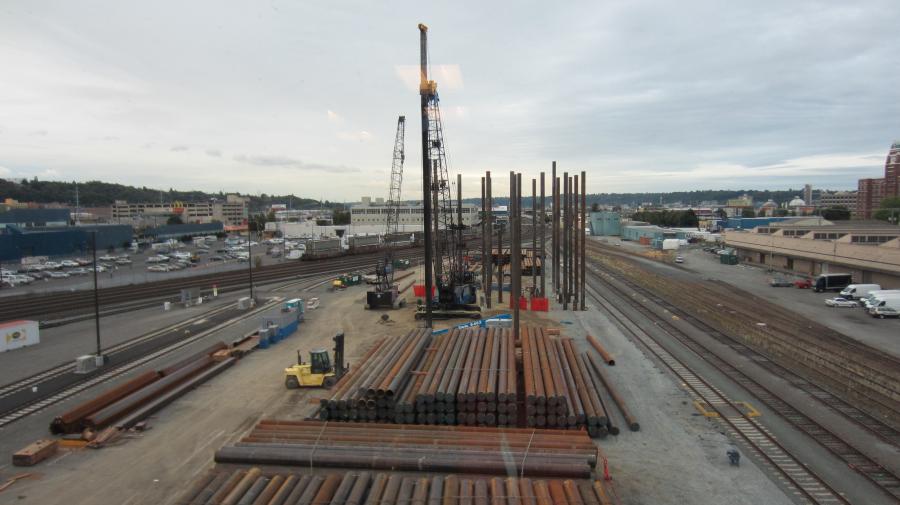 As on the previous Amtrak project, PCL is emphasizing safety, which is especially challenging since they are working in an active rail yard.

“PCL always has safety as the number one priority,” Glasgow said. “On the last project we did in 2012 with Amtrak, we finished that project [which spanned more than 700 days] with zero incidents and that was both PCL and our subtrades. As of this morning, we're zero incidents on this new project at day 260. That's something we're really proud of.”