Since its construction in 1957, the Vashon Island Ferry Terminal is the critical link that connects the communities on Puget Sound’s western shore to the Seattle mainland. 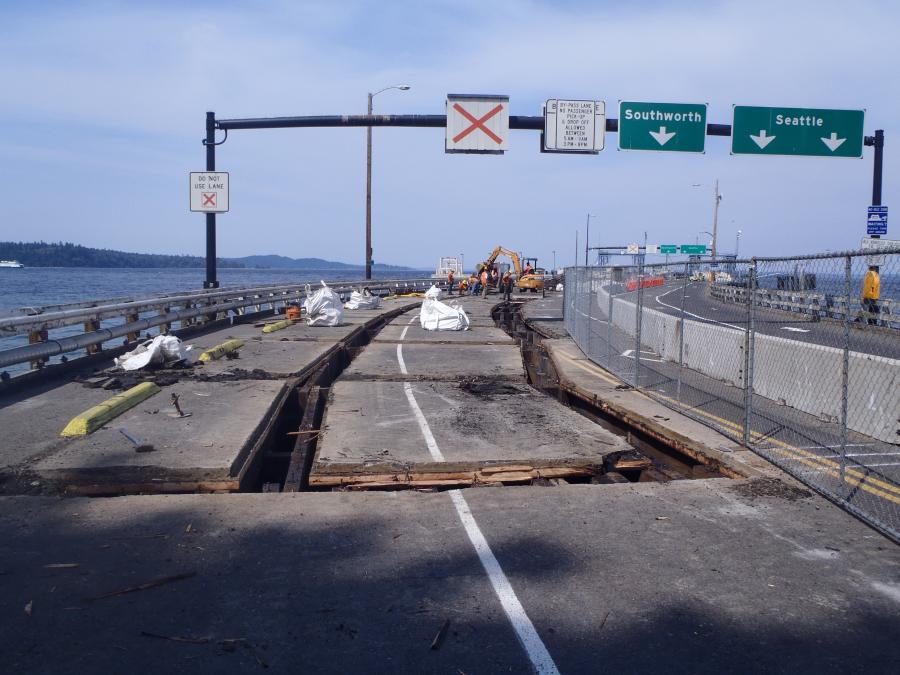 During the first phase of the Vashon Terminal — timber trestle and terminal replacement project — the dock’s deck was cut out in preparation for being replaced.

Since its construction in 1957, the Vashon Island Ferry Terminal is the critical link that connects the communities on Puget Sound's western shore to the Seattle mainland — an average of 30 sailings per day depart to West Seattle's Fauntleroy dock. With there being an estimated 50 percent chance of the terminal collapsing in the next 75 years, the Washington State Department of Transportation (WSDOT) Washington State Ferries prioritized replacing its existing timber trestles. However, the price tag of $40 million was too much even for this critical link, and Washington State Ferries sought a workaround that would still deliver the seismic upgrade at a lower cost.

“The initial idea was to replace the trestle, [but] the money was not there. We only had about $14 million and that's where this innovative type seismic retrofitting of a trestle came in that's different than just a removal and replacement,” said John Callahan, project engineer of Washington State Ferries.

Retrofitting the terminal became a viable option once it was realized that seismic failure of the pilings would occur due to soil movement during an earthquake.

“The project designers realized we had a unique situation where if we strengthen the trestle so it would not cause the timber piles to fail, brace it so to speak, that we could actually just retrofit the existing trestle. That's something that's normally not possible around here,” Callahan explained.

Of the $14 million required for the retrofit, 85 percent of the funding came from the federal government and 15 percent was provided by the state. The Aberdeen-based heavy civil marine contractor Quigg Bros., was awarded the contract. Ted Franco, project manager, said that his company is a natural fit for this retrofit project because they had completed several bridge seismic projects and were familiar with working in a marine setting.

“We've completed previous jobs with Washington State Ferries and we've done a significant amount of pier work and rehab of old piers,” Franco said. “This was a job that was appealing because it's the type of work we do and are familiar with.”

The approved project's scope called for “placing seismic braces at 10 critical locations along the dock and replacing about 200 ft. (60.96 m) of timber trestle with concrete supported by steel piling.” Callahan said replacing the first 200 ft. of trestle was deemed as being less expensive than seismically bracing it, and he expects the remaining 500 to 600 ft. (152.4 to 182.88 m) of trestle will be replaced up to the transfer span within 10 to 25 years. Over the course of the project, 104 piles will be driven with an estimated 1,000 tons (907.18 t) of piling, and Franco added that about 380,000 lbs. (172.365 t) of structural steel will be used. With this retrofit, the trestle is expected to last for 75 years.

“The paint coating on the pilings will prevent corrosion, and the pilings are just a bit thicker so in case the paint does fail, we can still maintain the strength of the seismic viability,” Callahan said.

One aspect of the project that Callahan is proud of is the use of pervious concrete on the portion of the trestle being replaced. It's an experiment we are conducting as a passive method for treating runoff, because pervious concrete can filter oil and metals, he said. “It's never been done on a trestle before.”

By using this passive water filtration method, they are avoiding the costs associated with services vaults to collect the pollutants.

Closing the ferry terminal during the yearlong retrofit wasn't an option, which meant crews would be working at an operating terminal and the public would have to contend with lane changes and traffic diversions.

“We did an extensive outreach with the people at Vashon. The fire chief and others sold this project, that it was a very good thing for Vashon to put up with the [construction] discomfort,” Callahan said. “The first couple of weeks there were some issues, but after the first month, the people understand what's going on.”

Quigg Bros. received notice to proceed at the end of June, and Franco said that site work began in August. With no space available for laydown, much of the work and staging area is based on barges.

“We ship our material in on an as-needed basis, usually with our barges,” he explained. “We're driving pile from our barges and setting steel. Our big [Manitowoc] cranes are barge mounted, so that we can do the work that the trestle couldn't accommodate.”

Crews of 16 to 30 are working on one to two barges at any given time, and Franco described the work as proceeding a bit slower due to working at an operating terminal and taking the proper safety measures.

“We can only do half at a time instead of being able to take the whole and rebuild it or do the seismic all the way across. You're doing half, then you shift traffic onto that half when it's done, and then you do the other half. It adds a significant time to the project with it being an operating terminal. There's operations that we wait to do between ferries. And with three ferries usually running to the terminal, it's a little bit slow.”

Yet even with the work moving slowly, the project is still on schedule for completion in summer 2016. Franco said the first phase of work consisted of cutting the 200 ft. of timber trestle into sections and lifting it onto a barge, pulling up the piling, and then dismantling the material in preparation for shipping to Roosevelt Regional Landfill in Klickitat County in eastern Washington.

“We've been driving pile from our barges and setting structural steel at this point. The first 200 feet is getting ready to complete on the west side, and the next several hundred feet that gets the seismic retrofit, it's almost at the stage where it's ready to asphalt. It's coming along.”