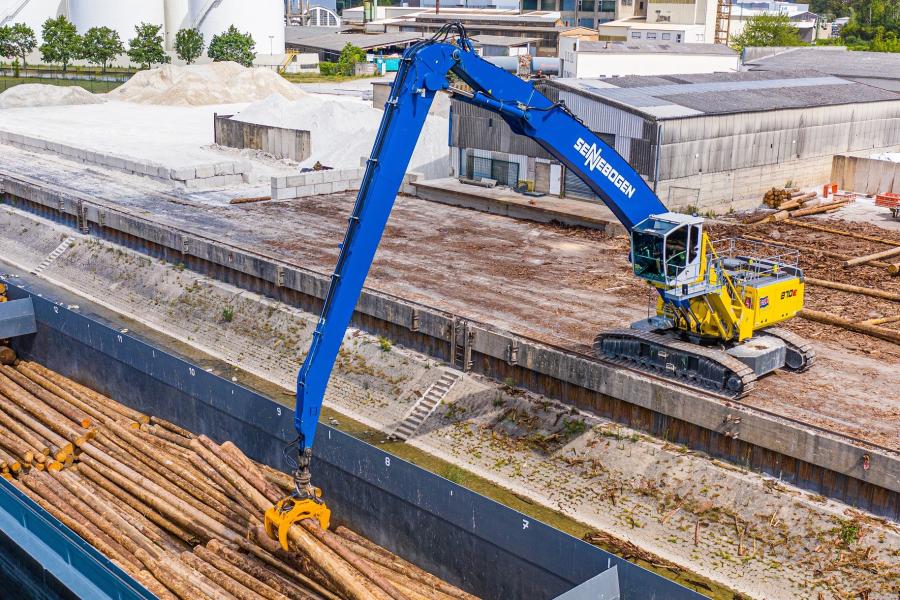 Versatile use of the 870 hybrid with the quick coupler on the stick is enhanced by the economical operation of Sennebogen's Green Hybrid System.

With already 6,000 operating hours under its belt, the Sennebogen 870 R-HD hybrid material handler has already made a name for itself in the inland Port of Bendorf.

The hybrid crawler has been an integral part of the dock operations since 2017 for Bendorfer Umschlag- und Speditionsgesellschaft (BUS Bendorf). The region on the banks of the Rhine where BUS Bendord operates is known for its local clay producers and BUS Bendorf helps these companies transport goods from Bendorf to the rest of the world.

The 870 is extremely efficient and flexible due to its reduced energy consumption, as well as for the numerous attachments it uses to meet the daily requirements of successful inland port operation.

All in a Day's Work

Anything can be transported by BUS Bendorf…bulk goods, general cargo, timber. A lot is asked of the 870 and it's up to the task. It navigates two docks that total a length of almost 10 football fields (2,952 ft.) with more than 700,000 sq. ft. of storage facilities. This is why stevedoring companies across the continent are relying more on material handlers like the Sennebogen 870 hybrid to replace cranes on the dock.

According to the operators, there are many advantages of a material handler:

1. The volume of cargo handled in inland ports has risen steadily in recent years and more goods are being transported by water.

2. It can be challenging and costly to purchase spare parts for older crane models.

3. Depending on the type of material, a material handler's cycle time can be up to two times faster than a crane.

What makes it all possible are the quick couplers and Sennebogen's plug-and-play principle allowing operators to easily adapt to a new material handling situation in no time. It's not uncommon for the BUS Bendorf port specialists to see a variety of ships at the company's 1,000 ft. dock every day. Some will have to be loaded with clay but also various other bulk and general cargo such as excavated soil, wood or big bulk bags.

Every year, the company estimates that its Sennebogen handles more than 330,000 tons. 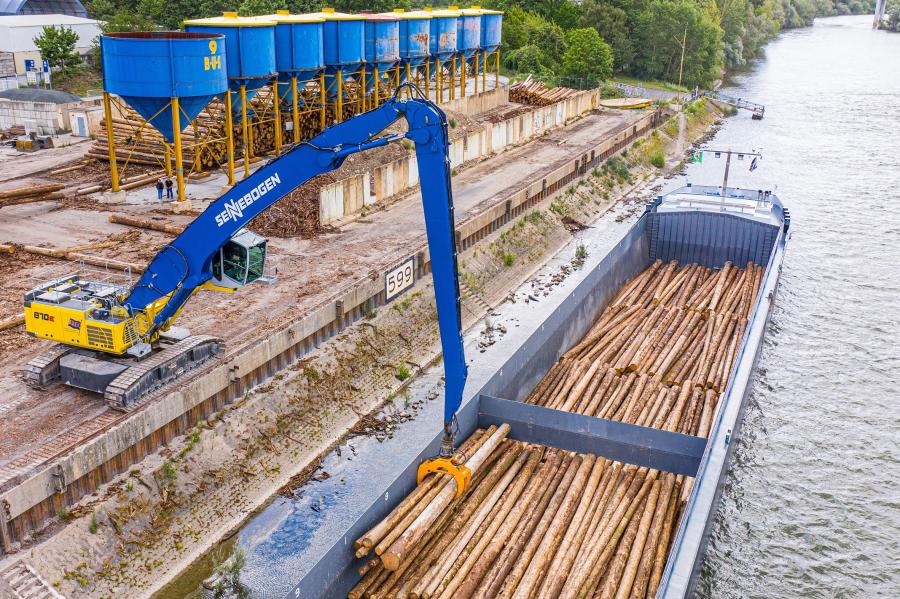 The Sennebogen 870 Hybrid with 80 ft. equipment for loading ships even at low tide. The stability is provided by the balanced and wide crawler undercarriage.

Sophisticated Machine Design: Not Only a Special Visual Configuration

In terms of mobility, the Sennebogen 870 hybrid outperforms its crane predecessor in every way possible, according to the company.

Previously, BUS Bendorf's harbor crane was mounted on a movable rail gantry that allowed it to serve ships along the entire length of the 984 ft. long dock. However, it also was limited to this singular travel path. The company's operations on the second dock is 1,640 ft. away and was totally inaccessible by the crane.

Since the travel routes were limited to a maximum clearance height of 16.4 ft. (5 m), a sophisticated solution was needed and that's where the collaboration between began.

Working together, they were able to reduce the height of the boom in the transport position to 15.75 ft (4.8 m) by implementing special kinematics without sacrificing reach and power. From afar and up close, although not in the traditional Sennebogen green, the material handler stands out on the banks of the Rhine. The 870's upper carriage is in bright yellow while the boom shines in BUS Bendorf's blue.

Sennebogen's 80 ft. long port equipment offers even more reach, depth and flexibility for port operations. In front of the dock wall in Bendorf is a sloping embankment and during low tide ships may have to berth 30 to 40 ft. away from the wall to be loaded. With a wide and secure undercarriage, the material handler is always securely positioned on the dock, even at full outreach and with large loads in the grab.

Even with all that, the decisive feature that they like best is Sennebogen's Green Hybrid System.

Managing Director Markus Stock explained, "Thanks to the energy re-capture system, fuel consumption is significantly reduced. I personally appreciate that the machine is very reliable with maximum uptime." 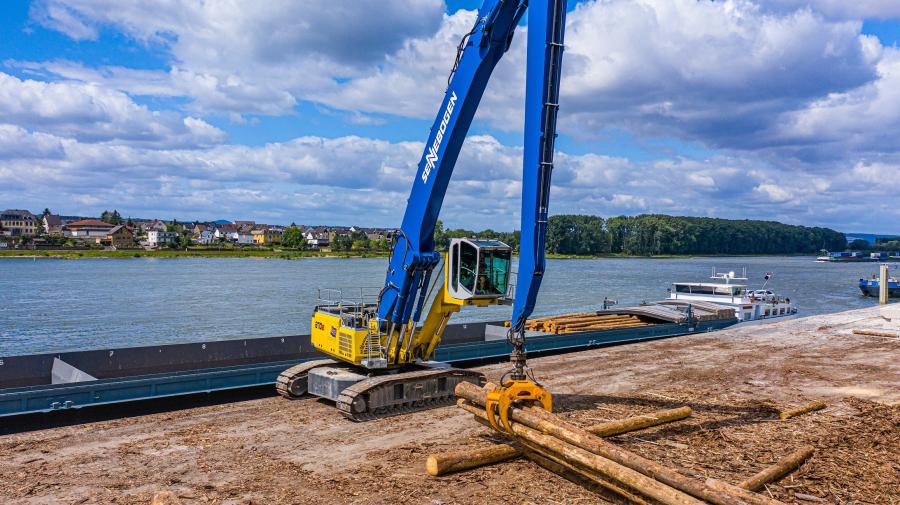 The Right Tools Make All the Difference

Operator Maik Hannöver had an inkling of his profession early on in life.

"I sat on heavy machinery for the first time when I was just three years old, because my father used to work in a quarry. So, I'd like to say that I've been in almost every kind of excavator — but I've never driven a better machine than the Sennebogen 870 hybrid."

He spends many hours in the ergonomically designed seat of the Sennebogen Mastercab and added, "It's a very comfortable place for me to work in." 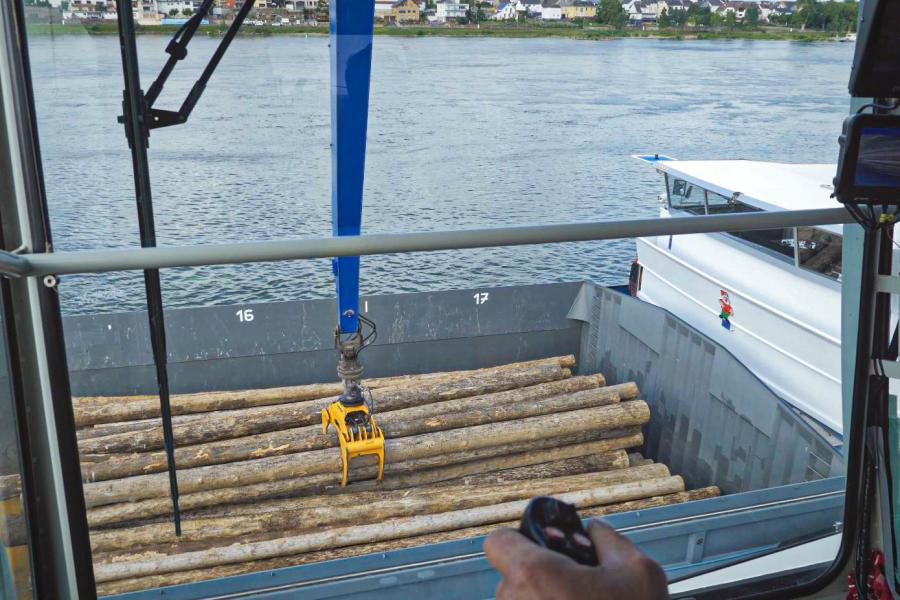