Sennebogen will deliver its machines wherever you need them to be, distance and logistics are a welcome challenge. However, in the case of Brandhuber Transporte GmbH, the transport of a Sennebogen 830 R-HDD E-Series to the job site was about as simple as could be just over a mile away.

In December of 2020, Manfred Brandhuber, managing director of Brandhuber Transporte GmbH, started a major demolition project in the historic city center of Straubing and he knew he would need a versatile machine.

The 830 E has the ability to be a multifunctional demolition machine while providing complete stability onsite. As well, demoing four-story residential buildings and doing immediate on-site sorting of the construction debris into the allocated containers would be easier with a Sennebogen.

While many were relaxing with some well-deserved time off at home on a cold December night leading up to Christmas Eve, others had work to do. The transport professionals at the rental department of Sennebogen were hard at work. The job was to load the machine onto the lowbed trailer, lash the machine down and drive the Sennebogen 830 R-HDD to the city center of Straubing.

As it was tasked to do, the Sennebogen 830 R-HDD E-Series handler spent the better part of 4 weeks creating space for a new office and residential building. One of the most efficient elements of this machine is its 360-degree reach when containers are strategically placed nearby.

Deconstruction professional Manfred Brandhuber explained the importance and convenience of not having to reposition the machine.

"For us, selective dismantling means removing material in a controlled and safe manner. Normally, we rely on earthmoving equipment, but it simply didn't offer us the necessary reach height for this job. Since Sennebogen is located virtually around the corner, the 830 R-HDD was available very quickly and we were able to expand our fleet easily with the rental machine." 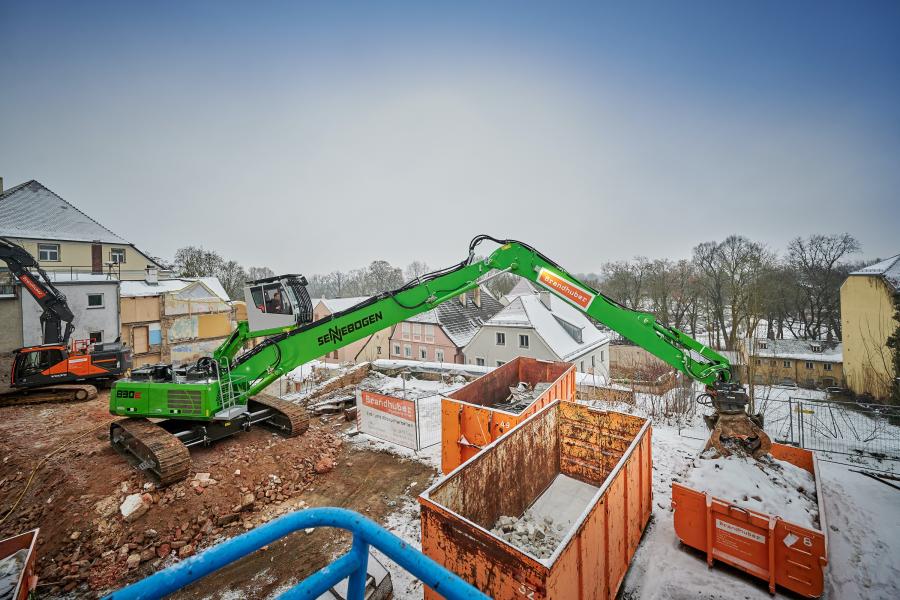 As the central player on the Straubing construction site, the Sennebogen 830R-HDD led the way with its precision, its user-friendly joystick controls and the design focused on the needs of the operator.

Equipped with a demolition grab, shears, bucket and a hydraulic hammer, these attachments, many requiring additional hydraulic pressure, were critical to the job's success. They all functioned perfectly due to Sennebogen's hydraulic system on the 830 R-HDD E-Series designed to meet the extra power needs of these attachments. With the quick coupler on the stick, the 830 could adjust to a new task in no time. As the central player on the Straubing construction site, it led the way with its precision, its user-friendly joystick controls and the design focused on the needs of the operator.

According to Brandhuber, "The elevating and tilting cab is really a practical feature for leaning back in the seat close to the work area when removing the material. That's good for my neck because I can work in a natural posture and at the same time enjoy a clear view of my attachment at work."

The 15 ft. (4.5 m) wide telescoping undercarriage is responsible for the stability of the demolition machine. It ensures that the compact 45-ton machine remains stable at all times, even when the upper carriage is rotated quickly and heavy loads are in the grab. Brandhuber himself demonstrated on-site what the 830 E is capable of.

"In our operation today, the roof of the building is being removed. We first grabbed the chimney at a height of 50 ft., moved it to the ground in one piece, disassembled all other components of the roof and immediately loaded bricks, metals or wood into the various containers for subsequent recycling. That's efficient."

Efficiency is a Question of Strategic Demolition Equipment Deployment

Both the stability and the ability to work in 360-degree mode were crucial for Brandhuber because the endless upper carriage rotation eliminated all time-consuming maneuvers for repositioning the machine. In a worst-case scenario, the ground would have to be specially prepared and stabilized for the machine's new location, which would have taken up further valuable time. As reported by Brandhuber, advance planning and proper placement of the 830 saved him time and reduced his overall costs on the job site. 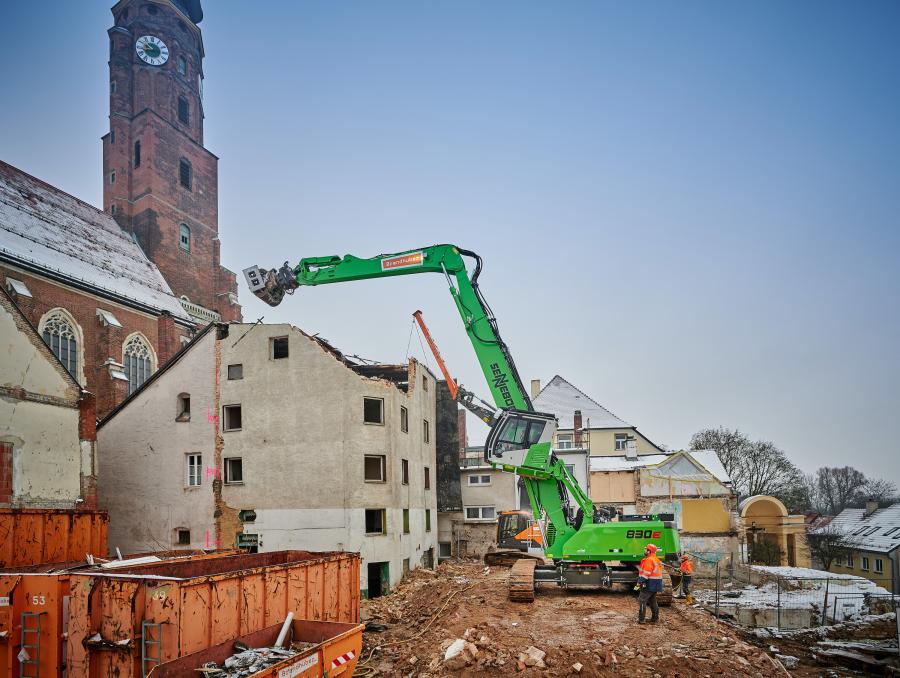 The 45-ton machine with a 15 ft. (4.5 m) wide, telescopic undercarriage proves its stability during demolition in Straubing's city center