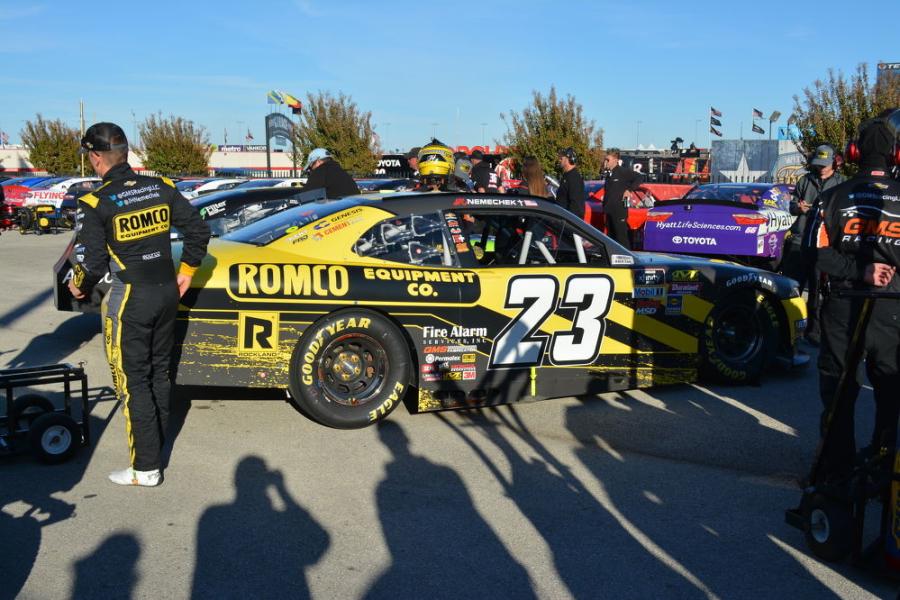 ROMCO has been a long-time sponsor of Joe Nemechek and his son, John Hunter (seen here), in the NASCAR truck series.

"In racing, as in construction, you are only as good as the equipment you have under you," said NASCAR legend Joe Nemechek to a gathering of ROMCO Equipment customers during a recent race weekend at Texas Motor Speedway.

This truism was among several comparisons Nemechek and ROMCO owner Robert Mullins drew between racing and heavy construction as they addressed the crowd of contractors and ROMCO customers that were on hand for the event. 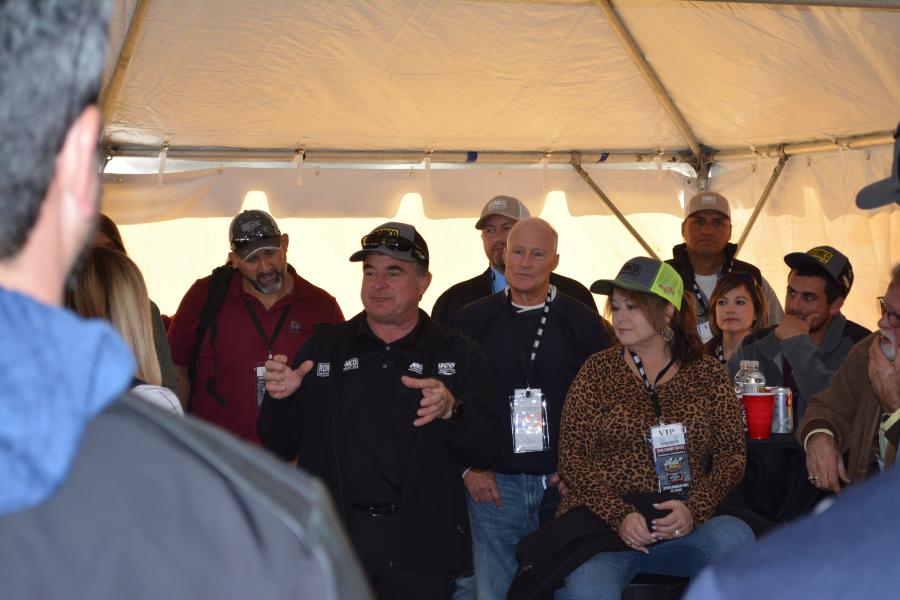 ROMCO has been a long-time sponsor of Nemechek and his son, John Hunter, in the NASCAR truck series, and on this weekend, the company's colors would adorn the younger Nemechek's car in the Xfinity series race.

The ROMCO/Nemechek relationship, which goes back five years, satisfies some important business objectives as well as Mullins' desire to remain involved in racing.

"We knew being involved with a race team would give us a great opportunity to entertain our customers and give them an experience they might not normally be able to enjoy," Mullins said. "This is one of two big weekends at the track where we go all out to give our customers a good racing experience."

The customer event on this race weekend included a meet-and-greet with both Nemechek drivers, a catered barbecue lunch, pit tours and hospitality suite tickets for the race itself.

"We've never seen the track at all, so being here in the infield, and seeing the pits is a pretty cool experience," said Joe Smith of Leland Bradlee Construction, one ROMCO customer in attendance.

When Nemechek and Mullins began talking about sponsorship, it became evident that the two organizations shared some key values.

"NEMCO Motorsports (Nemechek's company) is a family business, family-owned, going up against larger competitors every day. We wanted to be part of that," Mullins said of the race organization.

"What I saw in the Nemechek family is that they worked harder, cared more, were smart and had talent," Mullins added. "Those are all things we ask of our employees at ROMCO as well."

Joe Nemechek remembers what drew him to working with Mullins and his company. 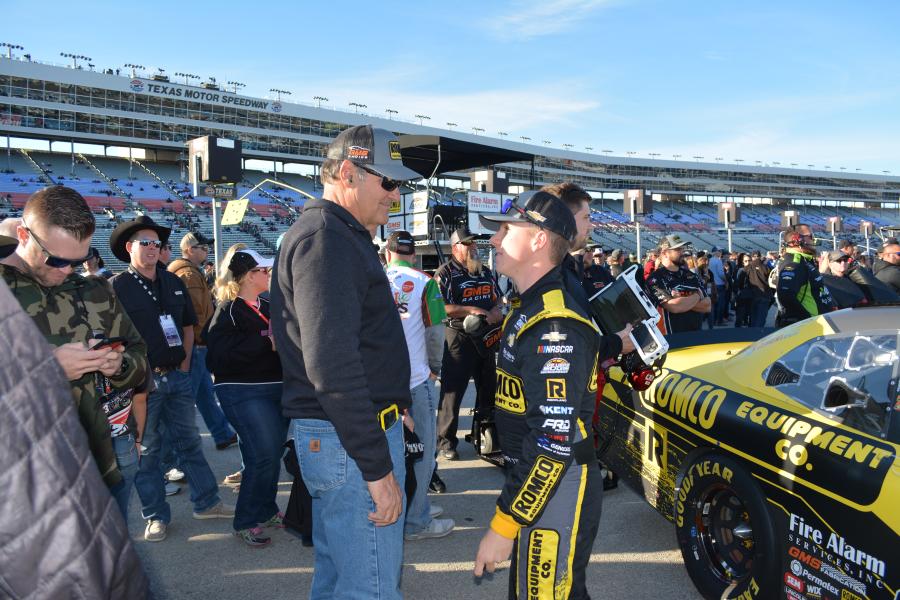 "A few years back Mr. Mullins saw us win a race somewhere and heard an interview with John Hunter and myself. At the time, we were looking for more help to be able to develop John Hunter's career. Mullins knew me through racing and he reached out to us and said he wanted to help. Once we met him, we knew it was a good fit. Everything clicked. He has been helping us ever since. Robert is a great family guy, and he respects what we do as a family. His operations are incredible. He has great employees and takes care of them. He takes care of his customers, too. It is the same as our business. You are only as good as the people you put around you and the equipment you put under you."

Twenty-two-year-old John Hunter sees the similarities in the two companies as well.

"ROMCO has been with me for four years, and we are super thankful for them supporting me and growing with our team," he said before the Xfinity race. "It is great having a generational family company associated with us. We're a family owned team as well. I love being around Mr. Mullins and everyone at ROMCO."

After getting involved in racing while in the Marines, he started racing late models competitively in the TIDA (Texas International Drivers Association) series in the late '80s. 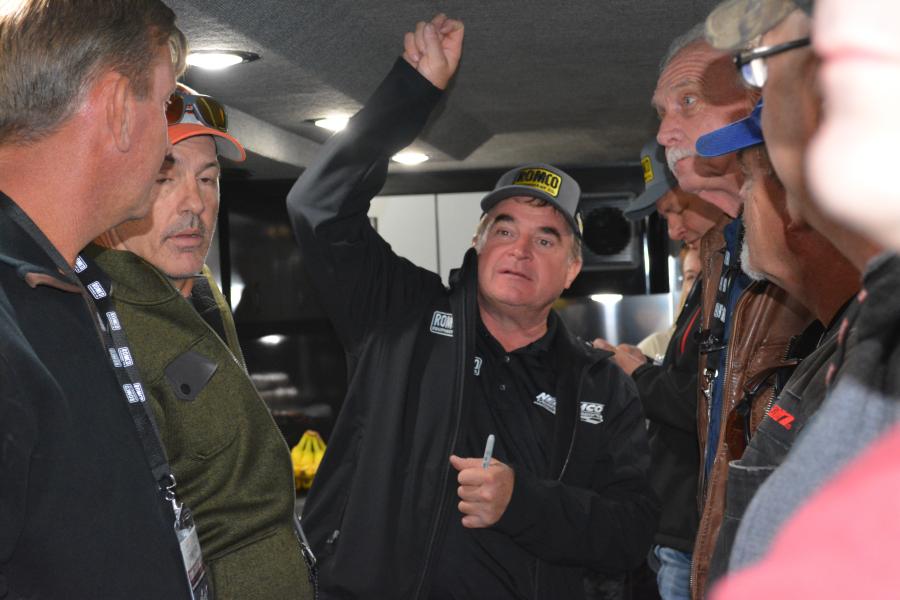 In the '90s, his attention turned to road racing, and he began racing in the SCCA (Sports Car Club of America) series, where he competed in both the Regional and Pro Circuit.

Paul Birkholz, a product support manager of ROMCO, remembers those days well. For most of his current bosses' racing career, Birkholz was right alongside as crew chief.

According to Birkholz, after taking a few years off, Mullins went back to competing in late models, this time at Houston Motorsports Park. Eventually, he would found the ROMCO Super Late Model Series. His series would run at all the asphalt tracks around Texas, and once Texas Motor Speedway was opened, the series raced there on the same weekend as the Indy Car and NASCAR series.

John Hunter Nemechek would go on to finish fifth in the Xfinity race, driving the ROMCO-sponsored Chevrolet for GMS Racing. Racing insiders said it is just a matter of time before he becomes a regular in NASCAR's top division, The Monster Energy Series.

The cost of racing in that series requires the support of large companies with a national footprint, so the future of ROMCO and NEMCO is not clearly defined at this point.

Mullins said that was the plan all along.

"When we started with the Nemecheks, we said their job was to outgrow our sponsorship, and they seem on the verge doing that. That's a good thing of course." CEG