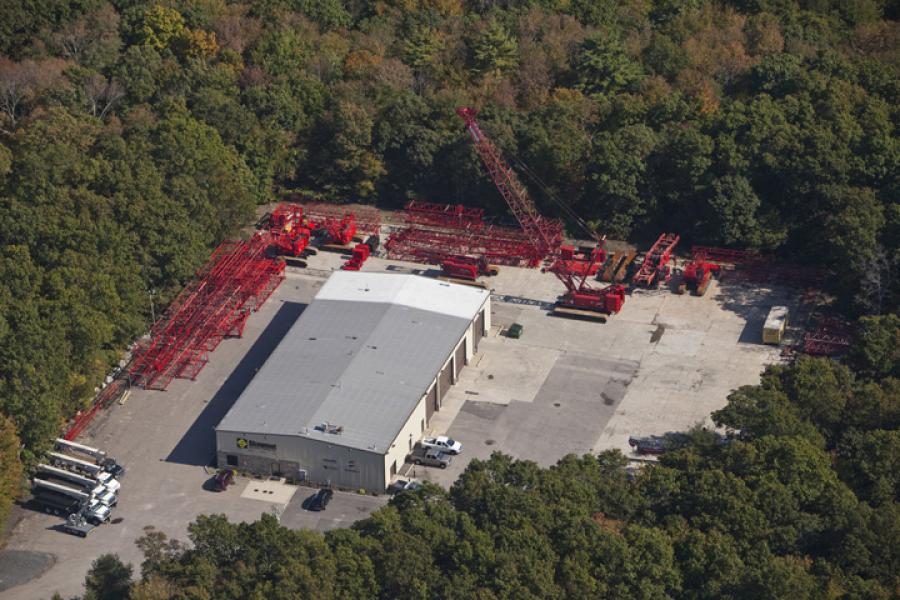 Shawmut was founded in 1957 by George O'Connell and is still to this day run by the O'Connell family. David O'Connell, George's son, joined the company in the 1960s and took over in 1978 as president. David's sons, Brian O'Connell and Kevin O'Connell, joined the business in early 2000s, as well as David's nephew, Joe Vergoni. Today, all three of them act as vice presidents and sales representatives of the company. Many long-term experienced and knowledgeable employees play a key role in the success of the business, according to the family.

"Our business philosophy is to do the right thing for the customer in each and every aspect of the business," David O'Connell said. "This is the only way to succeed. We have repeat customers who have done business with us for generations, as well as new customers who are doing business with us for the first time. We attempt to treat all customers in a fair and honest manner, whether it concerns an equipment sale, a rental, a parts purchase or service work.

"I am extremely fortunate to have my two boys, Brian and Kevin, and my nephew, Joe Vergoni, deeply involved in this family business. They are learning the same business values from me that I learned from their grandfather."

In 1963, the company became one of Grove's first distributors, serving Connecticut and western Massachusetts out of its Manchester, Conn., office. In 1995, Shawmut was made the exclusive dealer of the Manitowoc Company's crawler crane line for all of New England. Likewise, Grove recognized Shawmut's success in its existing territory and encouraged expansion throughout the six states of New England.

By the late 1990s, another facility was needed to satisfy its customer's needs. Shawmut opened another full-service facility in Massachusetts, speeding up response time for service and parts in the expanded territory. The Manitowoc Company acquired Grove Worldwide in 2002 and the company quickly became a global leader in the industry with Shawmut representing all of its product lines.

Shawmut continued to expand its international presence in 2008 when it was awarded the territory of the Atlantic provinces of Canada. Shawmut Equipment of Canada Inc., a full subsidiary of Shawmut Equipment Company Inc., was created and opened the doors of its facility in Saint John, New Brunswick. Shawmut Equipment also now serves customers in the Atlantic provinces of Canada, including New Brunswick, Nova Scotia, Prince Edward Island and Newfoundland. Demand for sales and service in Canada has been growing at a steady rate, requiring another location to better serve customers. A new facility is in the process of being built in Elmsdale, Nova Scotia. This location will serve as the headquarters for the Maritime provinces of Canada and will increase access to a larger geographic area and more remote jobsite locations.

President of Shawmut Equipment of Canada, Joe Vergoni, said, "This opportunity expanded Shawmut's territory, customer base and markets served. The timing was very good for Shawmut, as the U.S. economy slowed in 2008 and 2009 we were growing our business in Canada where the economy was still strong. Our new territory is due east of our traditional territory of New England. Culturally New England and Atlantic Canada are very similar which made the transition very smooth."

Shawmut has not only grown in size and territory throughout the past 60 years, but also has expanded the range of products offered and industries served. Shawmut recognized an opportunity to provide the required equipment to utility contractors across the United States and Canada. In 2014, Shawmut started offering utility equipment sales and rentals, as well as the support required for these machines. Shawmut supplies the utility industry and utility contractors with Terex TM Hi-Ranger tracked material handling buckets, Terex general digger derricks, tracked National cranes and Morooka rubber track carriers.

"This transition was very organic for Shawmut. We had already been providing utility contractors with cranes, so when they started to ask us to provide additional utility equipment, we felt it was a great opportunity for our company. At the time of our utility equipment expansion, major utility projects such as the Maine Power Reliability Program, New England East West Solution and Maritime Link were under way with the Northern Pass on the horizon," said Vergoni.

Shawmut responds to a variety of needs from a diverse group of customers as quickly and efficiently as possible. Shawmut's sales department strives to provide the best quality products to its customers with the highest level of customer satisfaction and both the parts and service departments are staffed with experienced and knowledgeable employees who are trained to ensure that the customers have the support needed to keep their machines up and running, according to the company.

Shawmut has expansive parts departments at all three of its facilities and inventory is closely managed and most parts are stocked to reduce any unplanned machine downtime.

The service department has a strong reputation of reacting as quickly as possible to the needs of its customers. Service support is always available, either on the road or at any of the three facilities. Shawmut Equipment maintains a fleet of service trucks equipped with the latest repair and diagnostic tools to provide 24-hour on site service for both repairs and routine maintenance.

Shawmut believes in constant factory training for its service technicians in order to provide the expertise needed to work on the specific products represented. Shawmut has many factory certified technicians that have the highest level of education on particular product lines, giving them the ability to fix customer's machines effectively and on-budget.

Additionally, Shawmut has strong relationships with financial institutions in order to offer different options for financing crane purchases. Shawmut appreciates all of its loyal customers and will continue to work to bring the highest quality products and outstanding customer support throughout the years ahead.