The work is taking place in Austintown, Weathersfield and Liberty Townships, and within the city of Girard. 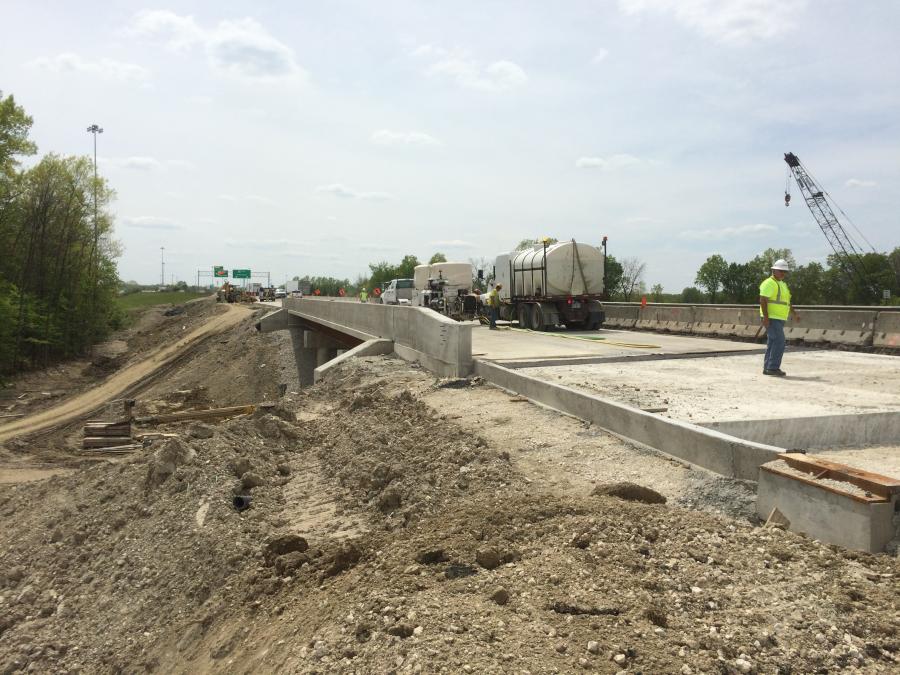 Shelly & Sands Inc. has completed the first year of the four-year contract to rebuild and widen a 4-mi. (6.4 km) stretch of Interstate 80 in Ohio’s Trumbull County, along with the widening and rehabilitation of seven bridges and replacement of six bridges.

Shelly & Sands Inc. has completed the first year of the four-year contract to rebuild and widen a 4-mi. (6.4 km) stretch of Interstate 80 in Ohio's Trumbull County, along with the widening and rehabilitation of seven bridges and replacement of six bridges.

The Ohio Department of Transportation project ($91.2 million construction, $102.2 million in total) began in June 2015 and will be completed in July 2018. The work is taking place in Austintown, Weathersfield and Liberty Townships, and within the city of Girard.

I-80 is being expanded from four lanes to six between State Route 46 and SR193/Belmont Avenue.

“The need is two-fold,” said Mike Simpkins, ODOT's planning and transportation engineer. “We have several bridges that are in need of rehabilitation and with increasing traffic volumes, there is a need for an additional lane. This is one of the top locations for truck traffic in the state — it's a major connector between Chicago and New York City. A lot of the exits in the area accommodate semi-truck needs.

“The pavement and bridges did meet their expected lifecycles,” he said. “They were built back in the 1950s and 1960s and it was time for a replacement. Because of the funding situation, we actually expedited the design much quicker than normally for a project of this size — from the beginning to the end, it took two years.”

The design deals with areas that have poor sub-grades.

“We actually hit a patch of coal and we have areas that have mines — these are always a challenge to deal with,” said Simpkins. “We have to make sure that the road has the longevity needed to handle trucks, which means having a stabilized sub-grade that has a good foundation to place pavement on.”

ODOT is using a traditional road base with an asphalt surface on this job.

“We've had some success in using fabrics to bridge some of these soft areas,” said Simpkins, “and asphalt is something that is long-term. When you have to do repairs, it is much easier and cost-effective than when you have to do it on concrete pavement.”

ODOT has been pro-active in securing the work space and access to replace an 800-ft. (243 m) long bridge that spans two railroad spurs and a junk yard prior to the start of the project. This was needed as space was required to place the bridge piers.

“Historically railroads present unique challenges in regards to highway construction,” said Simpkins, “so there was a lot of coordination needed. During the initial reviews I saw that access was going to be very restricted without a plan in place, so we pushed for that to be all pre-bid and pre-designed so that it was simply a bid condition that they contractors had to work with. The access points were arranged. We did not have the time to let the contractor get all these agreements in place. As well, we had some very minor utility re-locations for some of the noise wall placement.”

The expected lifespan for the pavement is 12 to 15 years and 30 to 50 years for the bridge work.

The new road infrastructure was designed via a partnership between MS Consultants and the GPD Group.

Current access to the highway is being maintained, with no changes to the ramps and exits/entrances.

“The only improvement that was made to the corridor was the addition of a through-lane throughout the corridor,” said Simpkins. “The addition of a new lane for traffic will make it safer. The existing shoulders were four-feet wide on the inside and eight-feet wide on the outside, and now we're putting in 12-foot shoulders on the inside and outside. People who need to stop will now have a full shoulder to pull off on.”

The traffic plan is based on a minimum of one lane of traffic being maintained in each direction of I-80 during non-peak travel times, along with various ramp closures throughout construction.

“Access to all residences and businesses will be maintained at all times throughout construction,” said Simpkins. “We're actually maintaining two lanes in each direction. There are times when we take it down to a single lane for a day to do some work. The approach pavement on both sides of the 800-foot long bridge was re-aligned so that we could maintain two lanes throughout the construction.”

“The designs for the bridges vary — some are steel beams and some are girders,” he said. “The re-alignments are wider and we're using some different materials and new beams. They may include sheer studs with high performance bridge decks. Everything is being brought up to current standards because the existing bridges are functionally obsolete.”

Dan Kirsh, Shelly & Sands project manager, said that his crews have completed Phase One of the project and have started Phase Two, with plans to initiate Phases Three, Four, and Five later this year.

“We're building a lot of temporary roads on the outside so that we can build the third lane in the median part of the eastbound and when that is completed,” he said, “there are several eastbound ramps to do. The job includes I-680 eastbound and westbound, I-11 northbound and southbound, along with I-80, the interchange at Salt Springs Road, the 7/11 collector, and U.S. 422 — these are interstates with ramps.

“It's a $100 million project and it feels like it,” he said. “There is lot of work and we have to be on schedule. We're a little behind because the good weather we had in the winter led to a lousy spring with lots of snow and rain. It's a difficult job — there's a lot of planning in terms of the design, not a lot of room to work in, and it's one of the heaviest travelled areas north of Columbus. With all the interstates and the turnpike, it's the heart of the northeast area.”

Coordination with ODOT is the key to success and attention to detail. Kirsch explained that four traffic fatalities that occurred in the work zone last year have galvanized everyone to make sure that nothing is left to chance.

“We have taken great measures to help out,” he said. “We increased our police protection so that traffic slows down and the police move around to maximize their presence on the work site — people take notice of them. There hasn't been a fatality since we initiated this and when there is a backup, there is police car following the last car to protect it.”

S&S worked throughout the winter with crews removing a lot of concrete, opening up some areas and setting wall in some areas. Some concrete also was put down.

“We did a lot of prep work and drilled a lot of 60-inch diameter drill shafts 60 feet into the ground for the big bridges,” said Kirsch. “The shafts go down right into the bedrock so there is very little movement and rifts in the foundations. We milled off the asphalt and broke up the concrete — we move thousands of yards of concrete and when the thaw came, we began to move dirt and went like hell on the sub-grade and undercuts.”

Kirsch holds monthly meetings with the subcontractors and coordinates the schedule and work with ODOT.

“A lot of times I have to change a few things on the schedule so that we could go back to something later on,” he said. “When you're building multiple bridges and you have delays in the weather, it's not easy.”

Crews are working mainly during the day, along with night work for certain aspects, and Kirsch plans to work throughout the year as much possible to meet the 2018 deadline. Much of the night work involves setting wall, shifting the work zone or paving a section of road.

Protecting motorists and construction crews is a priority for Kirsch.

“It's a very dangerous job sometimes when some drivers don't pay attention,” he said, “especially those of tractor trailers who are flying down the road at 70 to 80 miles an hour and the only thing between you and that semi is a plastic drum.”

On a daily basis — Monday to Saturday, there could be anywhere between 75 and 125 people on-site, with close to 50 S&S personnel. The principal subcontractors include: Keffler Bridge Company for bridge work; BMG Construction for barrier walls and concrete work; Lionel Construction for maintenance, traffic concrete work and paving; Lake Erie Construction for signage and guard rail installation; and A&A Safety for traffic control, striping and temporary road signage. City Concrete, City Stone and Sibley Concrete are supplying a lot of the aggregates.

While the job site is an hour away from the company's main yard/shop in Zanesville, Kirsch in addition to renting a temporary office for the project, also has rented a large temporary shop for repairs that has two 18-ft. (5.4 m) doors and an overhead crane to help lift heavy equipment. There also are some on-site mechanics.

“I learned my lessons from other multi-million jobs,” he said. “If you make it easier for someone to do something, it gets done quicker — you don't want equipment to be down for a long period of time. We're running equipment six days a week and sometimes seven. I keep a lot of equipment in the shop, including GPS equipment. We have several GPS-run pieces of equipment — a grader and four dozers. GPS helps tremendously with the job. We have a staff of surveyors that download ODOT specifications into GPS software.”

A Kobelco 330 excavator features logos of the Wounded Warrior project, which helps Iraq and Afghanistan war veterans from the Marines, Army, Air Force and Navy. Some of these excavators have been featured in parades to raise funds for the program and create awareness of the problems facing returning veterans.“I've had the honor of having it on this project,” said Kirsch. “Many of the operators are veterans and feel privileged to operate this piece of equipment. The Wounded Warrior project is an initiative that we support and we've collected money to help support the project.”