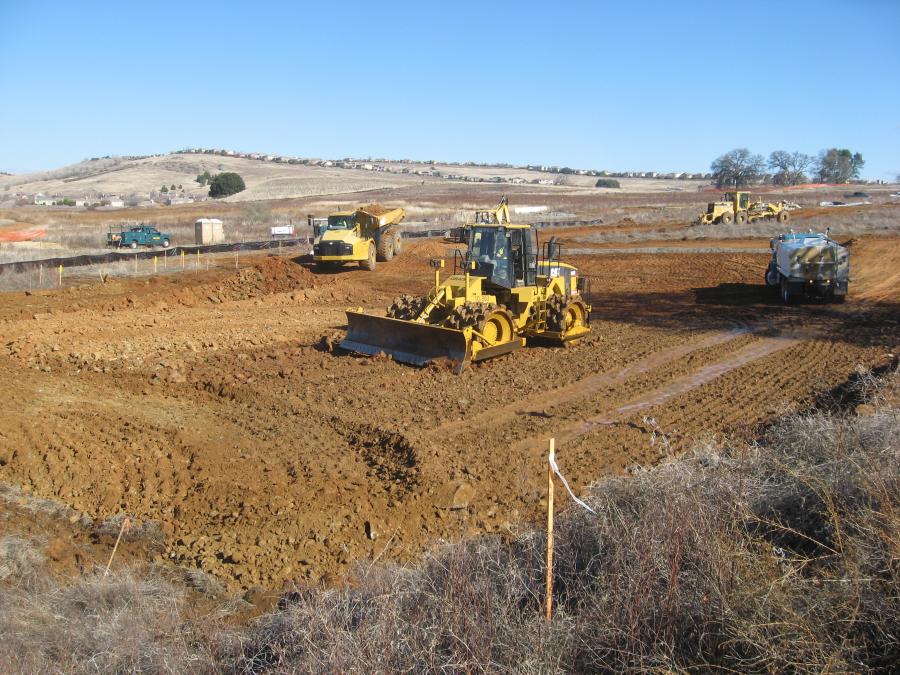 Granite Construction begins constructing the fill for the westbound on-ramp to U.S. 50 from Silva Valley Parkway.

El Dorado County, Calif., is notable for having large hard rock deposits. Along U.S. Highway 50 where the Silva Valley Parkway Interchange project is taking place, three drilling contractors stepped in to battle blue/white granite outcroppings where the new roadways are under construction.

The project is located in El Dorado Hills and will construct a new overcrossing over U.S. Highway 50, new on and off ramps with signalized intersections, and new bicycle and pedestrian facilities.

The goal is to decrease congestion on several area roadways and improve travel time by providing more direct access to U.S. Highway 50 for many area residents and businesses that would otherwise be required to access U.S. Highway 50 from El Dorado Hills Boulevard, Latrobe Road, or Bass Lake Road.

Myers and Sons Construction LP of Sacramento, was awarded the bid on Oct. 22, 2013, with the projected amount of $29.7 million. Change orders have since increased the project amount to an estimated $31.5 million. Developer Advanced Funds, 2004 General Plan Silva Valley Interchange Set Aside Fund and State and Local Partnership Program Grants paid for the Parkway.

Once excavation got underway in January 2014 with Granite Construction of California at the helm, hard rock was quickly discovered.

“The contractor spent several days trying to break rock with an excavator and hammer with minimal success before making the determination that blasting would be necessary. Blasting would be limited to one blast per week,” explained Aradhana Kochar, resident engineer of El Dorado County.

Neil's Controlled Blasting, based in Newcastle, executed the first blast of many on April 13, 2014. Blasting was restricted to Sunday mornings, during which the entire freeway was shut down. Most of the project, however, is being constructed outside of the traffic areas with the exception of the tie-in roadways.

Gerco Contracting of Auburn was the original subcontractor for overhead sign foundations but due to the extensive granite deposits, Drill Tech of Antioch and Sacramento Drilling were called in to assist. Farwest Safety Inc., based in Lodi, is in charge of signage and St. Francis Electric of San Leandro is under contract for electric work on the three signalized intersections and lighting of the overhead signs.

A total of four bridges are being constructed as part of the Parkway. The main bridge, carrying Silva Valley Parkway over U.S. 50, is six lanes wide and 280 ft. (85.3 m) long. The other three bridges hold the westbound on and off ramps, and the eastbound off ramp. The eastbound on ramp is a “loop on.” Structural concrete for the bridges and retaining walls will amount to 7,081 cu. yds. (5,414 cu m). ACL Construction of Ontario is installing bridge barriers and CMC Rebar of California is placing the rebar.

Heavy rains hit the area in November and December of 2014 but the project was not impacted.

“We put a plan in place to stabilize the project in August and September which allowed us to halt earthwork until April of 2015,” noted Kochar. Structural work continued through the winter months despite more than six inches of rainfall.

Over the next few months, the contractor also will perform additional drainage work to avoid erosion issues in the future. Paving is expected to be complete for the eastbound on-ramp and westbound off-ramp followed by placement of permanent striping for the entire project in early summer. Granite Construction will lay 35,000 tons (31,751 t) of type A asphalt and 2,770 tons (2,513 t) of rubberized open grade asphalt. Pending weather, the interchange will be open mid-summer.