Skanska One Year Out From Completing Pensacola Bay Bridges Project 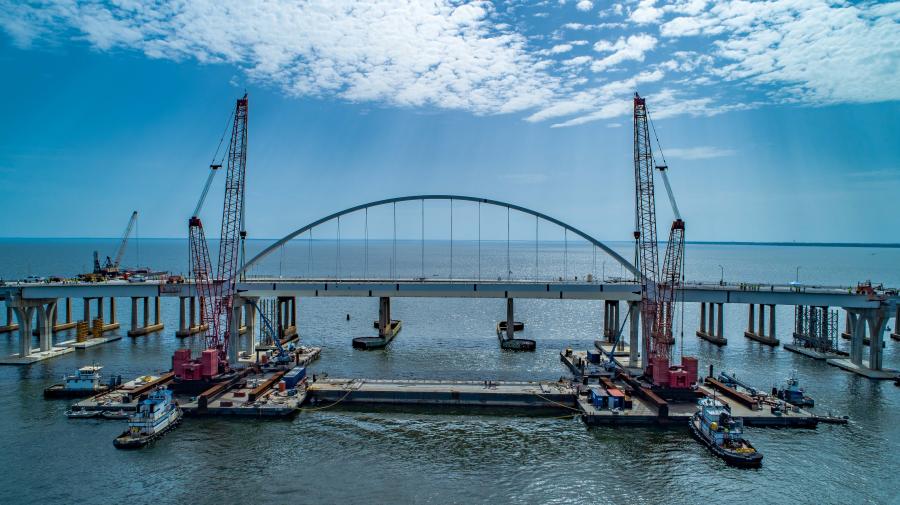 In an effort to improve overall traffic flow, the Florida Department of Transportation (FDOT) is in the midst of replacing the aging Sen. Philip D. Beall Sr. Memorial Bridge (Pensacola Bay Bridge) connecting the cities of Pensacola and Gulf Breeze via U.S. 98 (SR 30), which is a major east-west transportation corridor in the region and a primary hurricane evacuation route for the northwest Florida coast. 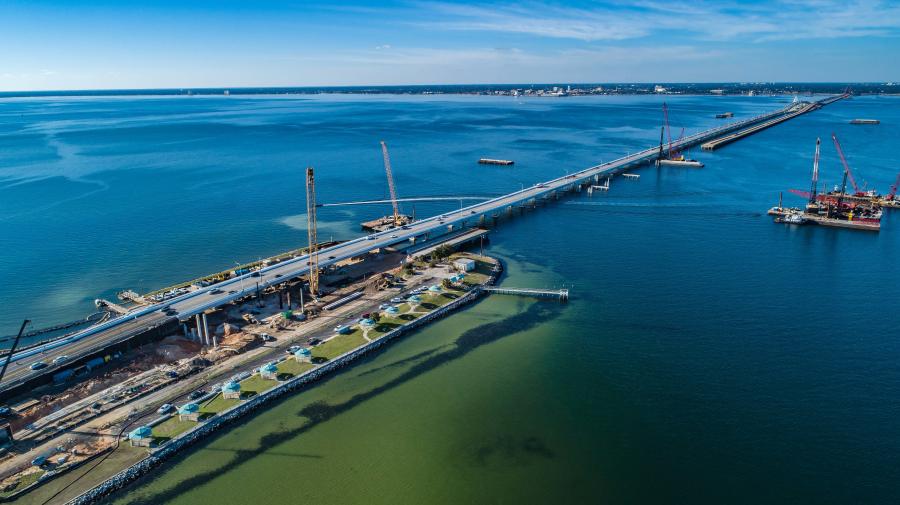 The $427 million project, expected to be completed in fall 2021, will see the construction of two 4.169-mi. long east-west bridges with three-lanes in each direction. Skanska USA Civil Southeast Inc. secured the contract in 2016. The work also includes the reconstruction of the highway approaches to the bridge and upgrades to various elements in the adjacent Gulf Breeze Wayside Park.

According to FDOT, the current bridge has been deemed structurally deficient. Although it is safe for continued use, it is nearing the end of its life span. A life cycle cost analysis indicated that replacing the bridge would be a better alternative than widening or rehabilitation due to the cost of maintaining the aging structure. Once complete, the project will increase safety and improve traffic flow for the estimated 55,000 drivers who traverse the bridge each day.

"This project is the largest transportation initiative in northwest Florida history," said Ian Satter, FDOT's District 3 public information director. "Having more lanes and adding the breakdown lane and pathway will improve safety. We're building this bridge with the safety of motorists and pedestrians in mind."

FDOT funding is behind the design-build project, which began Sept. 19, 2016. The design-build team also includes Eisman & Russo Inc., which is providing construction engineering and inspection services.

Similar to the original bridge, built in 1960, the new bridges will consist of two separate and parallel structures (three 12-ft. travel lanes along with 10-ft. inside and outside shoulders). The wider shoulders will make it easier to respond to incidents on the bridge, remove disabled vehicles and keep traffic moving. They also include a multi-use path that is expected to quickly become a favorite for walkers, joggers and cyclists. Plans call for an improved Wayside Park facility on the Gulf Breeze side.

In terms of architectural elements, the new structure will have a central arch to "add distinction"; shaded observation points along the multi-use path to provide opportunities to rest, reflect and enjoy panoramic vistas of Pensacola Bay; and recreational facilities on both shores of the bay that will feature boat launches and picnic areas. The fishing pier on the Pensacola side of the bay will remain in place once the new bridge is complete. 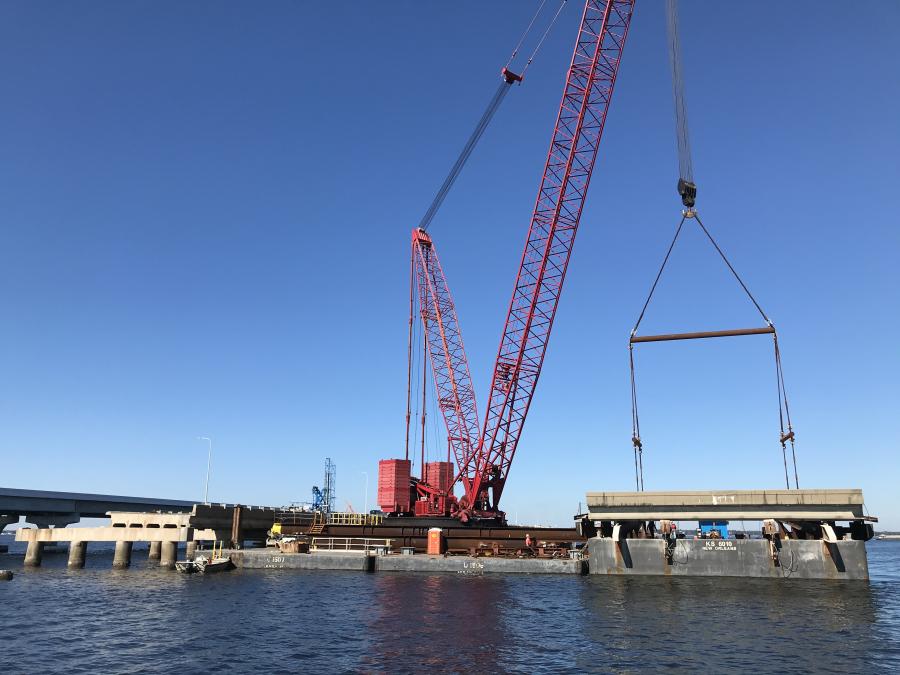 With a center span that provides 65 ft. of vertical clearance, the new bridges will be approximately 15 ft. taller than the current structures. The horizontal clearance for marine traffic will be increased from 125 to 150 ft. The new two-span bridges were designed by WSP and Skanska, which began their efforts in August 2016.

The decision by FDOT to use a design-build contract encouraged the Skanska and WSP team to incorporate accelerated construction techniques and innovative precast concrete designs to achieve an efficient system on a greatly reduced schedule. The design of the structural system required a balance between structural optimization and aesthetic considerations. The size and sheer volume of materials required for the construction was developed with a rigorous and detailed series of refined finite element models to produce a structure composed of 106 spans fabricated from 23.6 million lbs. of steel and 162,000 sq. yds. of concrete. The structure was compartmented into nearly 4,000 precast concrete elements at an on-site casting facility.

Due to the site being in a very corrosive coastal environment and a very active shipping area, serious loading demands were placed on the structure. Resiliency criteria dictated a "service immediate" level to ensure a hurricane evacuation route capable of handling high levels of traffic would always be available during storm events. The geology presented additional challenges in the foundation elements of the structure, with a highly variable subsurface consisting of an overburden layer of 30 to 40 ft. of silty sand, and a bearing layer of medium dense layers located at 120 to 250 ft. depth. To avoid field splices and obtain capacity at end-of-drive conditions, custom prestressed concrete pile solutions were developed.

The first bridge required the driving of 2,124 test and production piles, placing of 416 trophy pieces and 1,020 I-beams, as well as pouring of 210 bridge deck spans. The piles, ranging in length from 120 to 210 ft. and weighing as much as 190,000 lbs., were driven to depths averaging 80 to 100 ft. into the bay floor. More than one-third of the piles westbound bridge have been driven thus far. 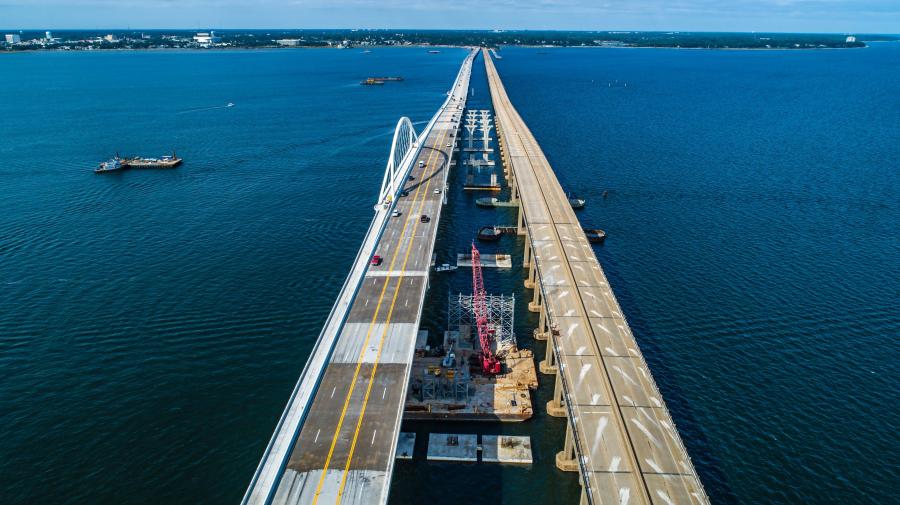 The pilings and other concrete components are being fabricated at a casting yard on Bayou Chico and are transported to the work site via barges equipped that large cranes with 22,000-lb. diesel powered hammers to do the driving.

"Building in Pensacola, one of the main challenges we have faced is dealing with the potential threat of hurricanes and hurricane force winds," explained Daniel Francis, project manager at Skanska's Florida civil operations. "They have previously caused disruption to the project and required us to ensure a hurricane evacuation route capable of handling high levels of traffic was readily available at all times. Additionally, working across an open, exposed bay is a challenge in itself dealing with logistics and weather conditions all while ensuring our workers are safe."

The approaches to the bridge are fairly restrictive due to lack of roadway shoulders and minimal room to store material.

"The first bridge was constructed in the open bay with relatively few obstructions," Francis said. "Currently, we are working on the second of the two bridges, which only has a 10-ft. clearance to the adjacent bridge. Additionally, approximately 2,000 ft. of the second bridge has to be constructed between the first bridge and a fishing pier."

Due to the underground utilities adjacent to the bridge, Skanska crews have been required to incorporate their presence into the construction plan.

Coordination is key to managing the actions of the crews, ranging from specialized units to general ones. 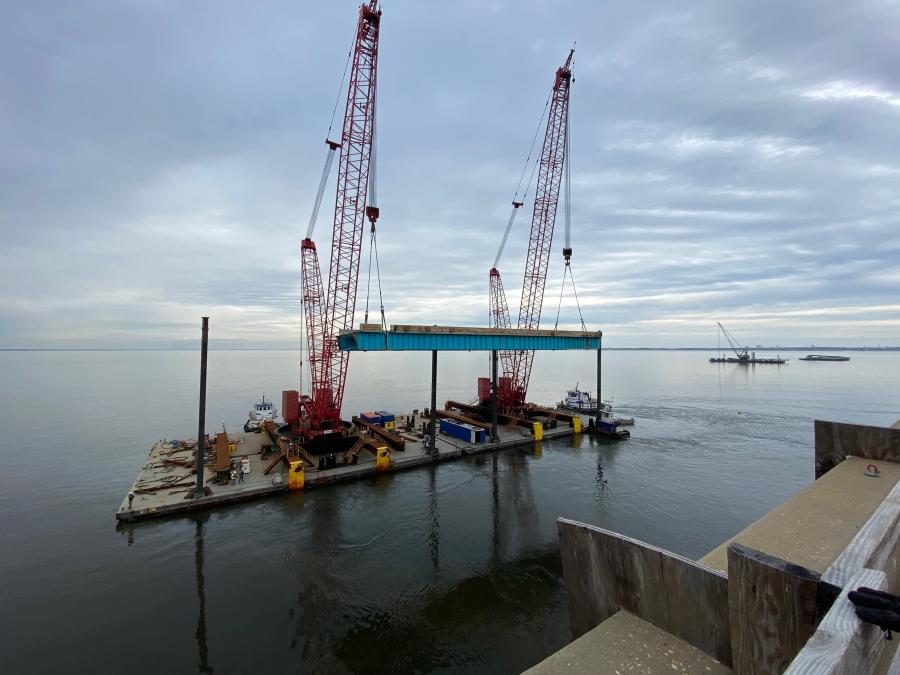 "Clear and consistent communication is imperative," Francis said. "We have daily meetings with all of the superintendents and operations managers every morning before we start work along the bridge project. Additionally, we also meet during lunch to do a mid-day correction and adjustment as things change on a day-to-day basis. Every operation has a work plan, which we review during our morning meetings with the crews to assess daily hazards and analyze what we're going to do for the day and how to mitigate any potential issues."

A major milestone occurred last July when cranes lifted the first half of the massive 800,000-lb. wishbone-tied steel arch atop the eastbound bridge. A similar section will be placed on the westbound bridge, with both sides having lighting that can be seen across the bay.

Safety, especially when working on water and at great heights, is a 24/7 operation, especially with crews working day and night shifts. There are many construction workers on-site, as well as specialized crews. Skanska has brought in local and regional subcontractors.

Skanska is using a vast array of equipment. Cranes can be found on the bridges and barges, be they crawler, hydraulic or tower types being used for a variety of simple and complex operations. Standard equipment such as excavators, dozers, various types of loaders and generators also are to be found. On the water there are several tugboats and barges of various sizes that can handle several pieces of heavy equipment, and some that serve as work platforms.

There are several on-site mechanics from Skanska and the subcontractors that are dealing with normal wear and tear, and the impacts of moisture and saltwater. On a multi-year project like this, routine maintenance is critical to maximizing the operating hours of the machinery.

Francis is pleased with efforts of the entire construction team and the ongoing progress.

"We have incorporated lessons learned from our previous projects in the area, including the Escambia Bay Bridge and the Choctawhatchee Bay Bridge, using the experience gained to improve our means and methods on the Pensacola Bay Bridge project," he said. CEG