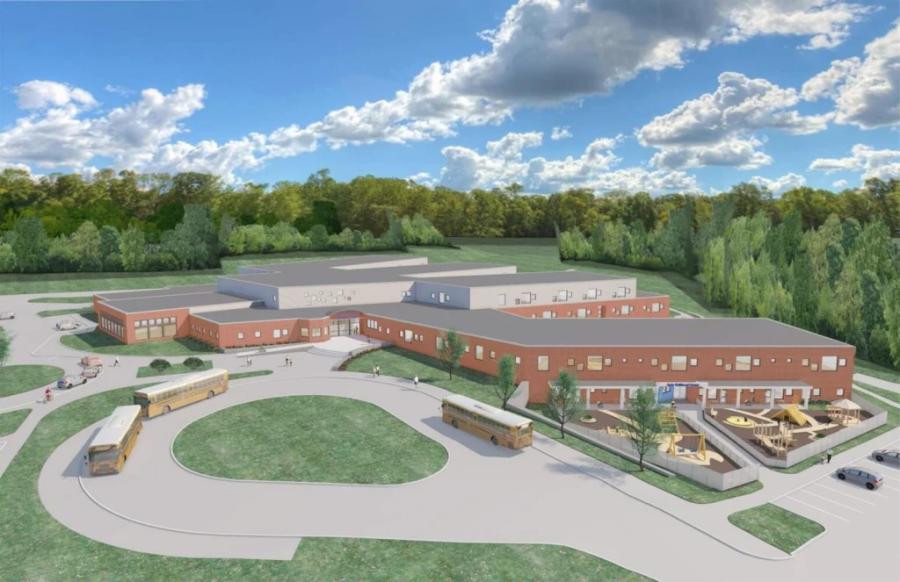 This architectural rendering is of the $75 million consolidated elementary school that’s planned for Skowhegan. The state will cover approximately 95 percent of the cost to build the school. (Stephen Blatt Architects image)

Nearly 72 percent of voters in Maine's School Administrative District (MSAD) 54 gave their support in mid-June for the construction of a $75 million consolidated elementary school in Skowhegan.

District officials and architects now will turn their attention to the design development and funding phase of the project to be approved by the Maine Department of Education before going out to bid for construction.

MSAD 54 officials want the school to be built on the same property where the Margaret Chase Smith School currently is located on Heselton Street.

Plans call for the new facility to house 850 students in pre-kindergarten through fifth grade. At the same time, the construction is designed to consolidate three existing elementary schools in Skowhegan and part of nearby Canaan Elementary.

The Morning Sentinel reported June 16 that local education leaders are expecting to break ground on the site some time in 2023, with the intention of opening the school in the fall of 2025. The North Elementary and Margaret Chase Smith schools will remain open during construction of the as-yet-unnamed school, but both will be demolished once the new facility is completed.

"I'm excited and nervous," MSAD 54 Superintendent Jon Moody told the Waterville news source. "[The new school] will be bringing together three full buildings and some of [the] Canaan Elementary staff. I'm excited to have continuity of education for our kids and staff."

In addition, the district's bus garage at the Margaret Chase Smith School will be moved to the North Elementary property on Jewett Street, he added.

Maine to Pay for Most of School's Construction

The state will cover just more than 94 percent of the cost to build the merged schools, MSAD 54 officials announced.

The district has hired Portland-based Stephen Blatt Architects to lead the design effort — the same firm that created the plans to build Skowhegan Area Middle School in 2003 and Mill Stream Elementary School in Norridgewock in 2008.

Some elements of the latest project will be locally funded and need voter approval, Moody said on his remarks to the Morning Sentinel. Like the Mill Stream Elementary project, school officials and architects are looking at plans for a gymnasium with enough space to host community events. This could mean the gym will be larger than what the state recommends, and the district would need to pay the added cost for the bigger space.

The main section of the new school will house offices, a cafeteria, kitchen and gymnasium. Additionally, grade levels will be sectioned off in wings that extend outward.

The need for a modern school in the MSAD 54 district is illustrated by the fact that North Elementary is ranked second out of 74 schools that the state has considered most in need of new or improved facilities. In addition, several other MSAD 54 schools — including Bloomfield Elementary, Skowhegan Area High School/Somerset Career & Technical Center, and Margaret Chase Smith School — also are on the dubious lineup.

In neighboring MSAD 49, Fairfield Primary School is ranked number one on the same list.

After Construction Starts, School to Be Named

Moody said MSAD 54 officials have already started discussions about what name to give the new school.

Lynda Quinn, chairperson of the school district's board of directors, said the selection process will be like the process the board used for naming a new mascot for the high school, though not as comprehensive. That search began in 2019 with the board gathering feedback from community members before narrowing the list and presenting it to students. From their feedback, the choices were whittled down to three names to then be chosen by the board.

"It probably won't go to the level of asking students," Quinn said. "[The board] hasn't figured out all the details yet. I'm going to push for both [survey] forms online and on paper, because a lot of people don't have access."

She explained that the process to name the new school may not begin in earnest until 2024, after construction is under way.