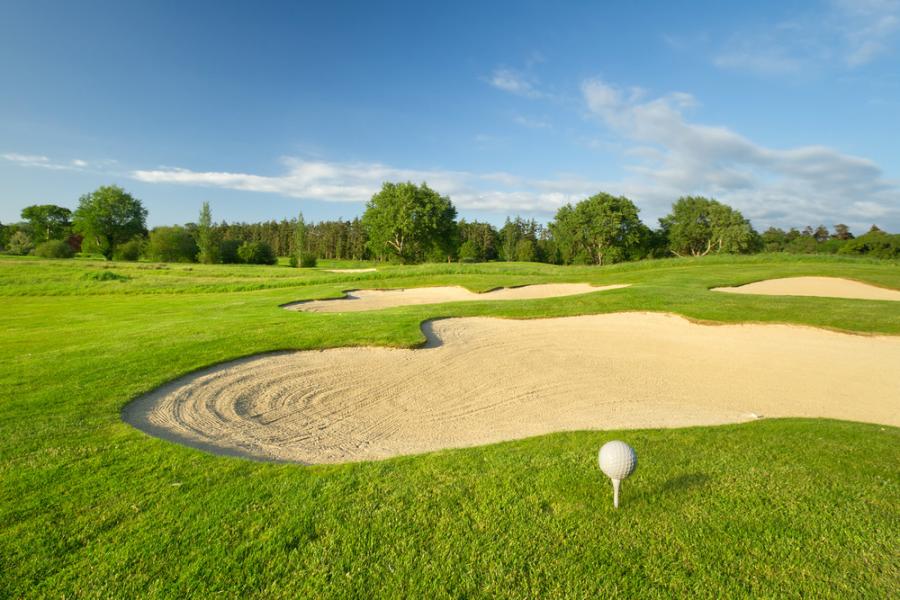 Everything has to come from somewhere.

So it is that a small company in south Arkansas has become a leading producer of sand.

Not "Lawrence of Arabia" sand or time-is-running-out sand or bury-dad-to-the-neck-on-vacation sand. The family-owned Hayden Group Inc., based in Sheridan, produces sand tailor-made for use in golf course bunkers around the nation.

From courses designed by Tiger Woods to some of the finer courses in Arkansas, the Hayden sand is in demand.

The Hayden Group, with 35 employees, composes three types of bunker sand from the quartz it mines from its local quarry. It also produces gravel for high end swimming pool liners as well as sand for construction projects, among other things.

But the golf course gig has a certain cachet.

"It ended up being a pretty good side of the business," Collins said. "We're still pretty big in the aggregate pool finish business. I tell everybody we do that for work, the golf courses are fun."

The Hayden Group has shipped its Premier White, Premier Play and ProChoice sands to courses in Texas, Tennessee, Oklahoma, Missouri, Kansas and Florida as well as the elite, nationally ranked Alotian Club in Arkansas, along with other top courses in the state.

After declining participation, golf saw its first uptick in 14 years in 2018, according to the National Golf Federation's industry report. As courses have cut budgets, the Hayden Group's bunker sand proved to be ideal because it requires little maintenance.

"Our sand lasts so long, so a club might go 10 years before they renew bunkers," Collins said. "If they're just buying sand to touch up, a lot of courses don't do it for a couple years."

Collins can't recall which course was the first the company supplied, but he believes it was either The Blessings in Fayetteville — home course of the Arkansas Razorbacks funded by Tyson Foods Inc. Chairman John Tyson — or Chenal Country Club in Little Rock.

"In general people just wanted a white sand, so it just got to be where people knew there was white sand coming out of Sheridan," Collins said. "It was mostly word of mouth."

The sands are sought after for their color, Collins said, as well as for meeting standards like penetrometer (or fried egg lie) test, angularity, infiltration rate and angle of repose. It all means the sand doesn't bury the ball, it stays in place during weather events, can withstand rain (meaning low maintenance) and stacks up on the face of the bunker instead of sifting to the bottom.

"It's such a dorky thing," Collins said of the sand tech. "When you talk to an agronomist, it's real hard talking to them. To me it's a nuclear physicist talking to a redneck. I BS my way through a lot of conversations."

The operation involves using heavy machinery to basically dig rock out of a swamp, load it and transport it to a plant to be crushed and processed. The crew doesn't know until they see it if they've brought up the right kind of rock.

"The mining is hard. You're constantly getting flooded," Collins said. "You can't tell from the ground level what color the rock is."

Three pumps that can handle 12,000 gallons a minute are used in the process, and the company averages around 50,000 tons a year. There is a rail facility in Malvern, Collins said, but shipping is done primarily by truck.

"It's more high tech than most people probably think it is," Collins said. "Especially when you have bad weather with a lot of flooding. We have to pump a lot of water."

The Hayden Group is the descendent of Hayden Gravel and Construction, founded in 1983 by Collins' father-in-law and company president Darrell Hayden in Hornersville, Mo. Hayden is still involved with the company while his son, CFO Will Hayden, handles day-to-day operations.

The senior Hayden saw an ad for a quarry south of Sheridan in a 1989 issue of Pit and Quarry magazine. He decided to buy it and expand and move the company, dropping the construction side and focusing on sand and gravel.

Other purchases, expansions and partnerships followed, including the creation of Arkansas Decorative Stone, a company offshoot that began providing bunker sand in 2007. The company became the Hayden Group after it opened a packaging facility in Sheridan in 2016, and it added a new sand plant in 2017.

The company is bidding on more courses in Florida and Arizona, but it also continues to seek ways to diversify, add distribution partners and develop new clients and products.

Therefore it seems inevitable that the Hayden Group would begin supplying sand for — what else? — beaches.

"The big new thing lately has been man-made beaches from a company called Crystal Lagoons out of Miami," Collins said. "We have done two in Texas and it is freaking amazing."