Southard Brothers Construction, based in Moncks Corner, S.C., is currently working a project that will help bring hundreds of jobs to the Berkeley County area. 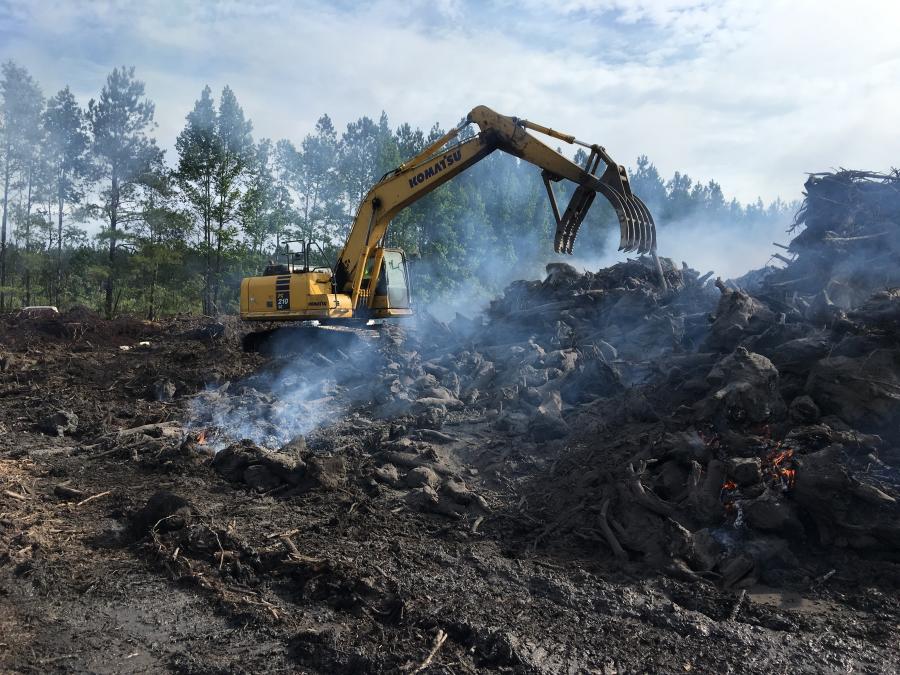 Southard Brothers Construction, based in Moncks Corner, S.C., is currently working a project that will help bring hundreds of jobs to the Berkeley County area.

The wetlands mitigation watershed project involves creating a suitable 100-acre building site for a future subsidiary of a Volvo assembly plant, which is currently under construction, as well as digging 100 acres of ponds for the project. The ponds will help divert some of the water in the surrounding area of the 6,500-acre development. Southard said he is moving 450,000 and 500,000 yds. of dirt on the project between the ponds and the site prep. He also had to remove timber from the site, which was previously home to a tree farm.

Currently, the company has 23 machines working on site of which 17 are Komatsu. Several of these machines are Intelligent Machines with integrated GPS. Southard said their relationship with Komatsu and their dealer, Linder Industrial Machinery Company, began in 2013 on a ball park complex project in Moncks Corner. The $3 million project involved four baseball fields, a football field, a soccer field and a 200-space parking lot. Southard said he couldn't handle the project with the equipment he owned — he needed medium-sized equipment — so he contacted local equipment dealers, including Linder.

“A week later, the salesman from Linder brought me exactly what I wanted, broken down by rental, lease and purchase prices, as well as financing,” said Jason Southard, co-owner of Southard Brothers Construction. “They came to us when we didn't bring anything to the table. They stepped up and looked out for us. From that point on, I haven't called anyone else.”

Southard also said he's been happy with the performance of his Komatsu D65 dozer and 40-ton HM400 trucks on the watershed project and others.

“The 40-ton truck was our first Komatsu; we've used them for six years, now,” said Southard. “We run them pretty much every day, and we've had no problems whatsoever. Some of our bull dozers have 5,000 hours on them, and I don't think we've done anything to them. Same goes for the track hoes — both have 5,000 hours on them. We've got close to 4,000 hours per undercarriage on the D61 bull dozers. We've used them in sandy conditions, and they've worked well. We're very satisfied with the undercarriages — all from the factory.”

In addition to the watershed project, Southard is currently working on a phase of a 130-lot sub-division at Fox Bank Plantation between Moncks Corner and Goose Creek on Highway 52. When complete, it will be an approximately 1,200-home development. Southard is working as a subcontractor for the developers, Chesapeake Development.

Southard said he'll be using all Komatsu machines on a power plant project near Georgetown.

“We're doing foundation work for a proposed landfill in an existing ash pond. The ash pond has been excavated, and all the ash has been removed by the power company. We came in under this contractor by removing the existing soils beneath the ash pond. Then, we have to back fill roughly 400,000 cu. yds., which will be the foundation or base for the future landfill for ash disposal. It's very similar to the Volvo site. It's just bulk moving material,” said Jason Southard.

Southard credits his father for the success of the business.

“He gave us the opportunity. He took the risk in '85 when retired from the Federal Government,” said Jason Southard. “He quit a year from retirement and started a construction business — Cooper River Construction. Because of him, my brother and I had the opportunity to learn the trade, and we just carried it on.”

Many of Cooper River Construction's employees stayed on with Southard, and he appreciates their loyalty.

“We have very little turnover with our employees. Our first truck driver has been with us for 17 years. Having good guys that stick around for many years helps us a lot,” said Jason Southard.