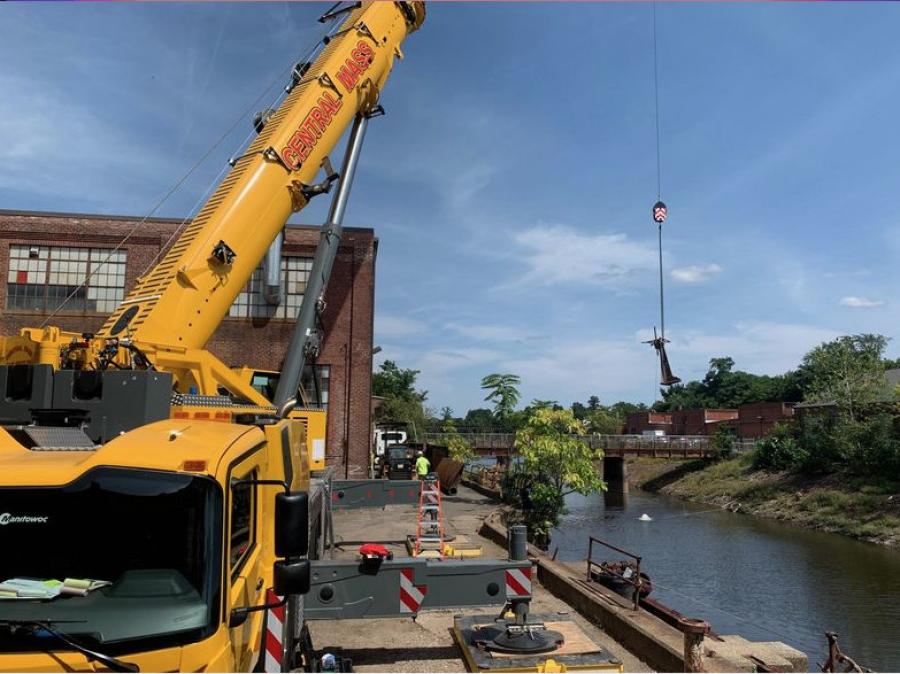 One of the key elements of the dam-improvement project includes replacing the 65-year-old crest gate. The 3-ft.-tall, 105-ft.-long, flap-like structure can be lowered in advance of major storms and hurricanes to release water and reduce the level of the pond to mitigate potential flooding and protect the safety of the dam and downstream areas.

The city of Springfield, Mass., announced in mid-August that it had contracted with two local companies to begin a $3.6 million project to repair and upgrade the Watershops Pond Dam at the historic former Springfield Armory manufacturing site.

Watershops Pond, which is created by the dam, is surrounded by several historic industrial buildings that were part of the Springfield Armory, the first such U.S. facility and the primary manufacturing center for American military firearms from 1794 until its closing in 1968.

BusinessWest, a western Massachusetts publication, reported that one of the key elements of the dam-improvement project includes replacing the 65-year-old crest gate. The 3-ft.-tall, 105-ft.-long, flap-like structure can be lowered in advance of major storms and hurricanes to release water and reduce the level of the pond to mitigate potential flooding and protect the safety of the dam and downstream areas.

As part of the upgrades, several other measures will be implemented to bring the dam in compliance with Massachusetts dam-safety regulations and improve access to the gate-control house for city of Springfield personnel.

In advance of construction, GZA facilitated and oversaw a controlled draining of the 200-acre pond last November for inspection of the dam and pre-construction activities. That also allowed the city and others to inspect and repair infrastructure and remove trash and debris, some of which was deposited there by a 2011 tornado that struck Springfield and other western Massachusetts communities, BusinessWest noted.

According to the city's website, the pond's drawdown was designed to reduce risks to workers and downstream areas during the active construction work and has meant facilitating the control and diversion of the Mill River to allow completion of the dam upgrades.

GZA worked with city officials to secure approvals for the project with the Massachusetts Executive Office of Environmental Affairs, the state's Department of Environmental Protection and its Division of Fisheries and Wildlife, the U.S. Army Corps of Engineers and the Springfield Conservation Commission.

The project is being funded through a $17 million grant the city was awarded in 2017 from the U.S. Department of Housing and Urban Development's National Disaster Resilience Program.

"One of GZA's core values is caring for our communities," GZA CEO Patrick Sheehan said in a statement to BusinessWest. "As a longtime member of the Springfield community, we were proud to work with the city and Massachusetts regulators to design and permit the improvements for this important project, [one] which will help to continue to protect thousands of residents while preserving a piece of American history."

Founded in 1964, the company has established dam-safety engineering as one of its core disciplines. Since that time, GZA has been involved in designing, constructing, inspecting and performing seismic evaluations of more than 1,000 dams throughout the United States, ranging from hydropower dams regulated by the Federal Energy Regulatory Commission to former mill-pond dams, levee systems and high-hazard water-supply dams.

While the Watershops Pond Dam was well constructed, the city noted on its website that its age requires maintenance and upkeep to remain in service. Most importantly, it was built prior to modern-day standards and regulatory requirements for dam engineering and safety.

The municipality acquired Watershops Pond and the dam in 1969 after the federal government closed the Armory. The Springfield dam, located at 1 Allen St., has supplied various forms of waterpower to the Watershops for more than 200 years, including hydroelectric power from 1920 to the 1950s. Other than the Connecticut River, Watershops Pond is by far the largest body of water in the city of Springfield.

The current rehabilitation of the dam is expected to be completed by the fall of 2022, according to the city.