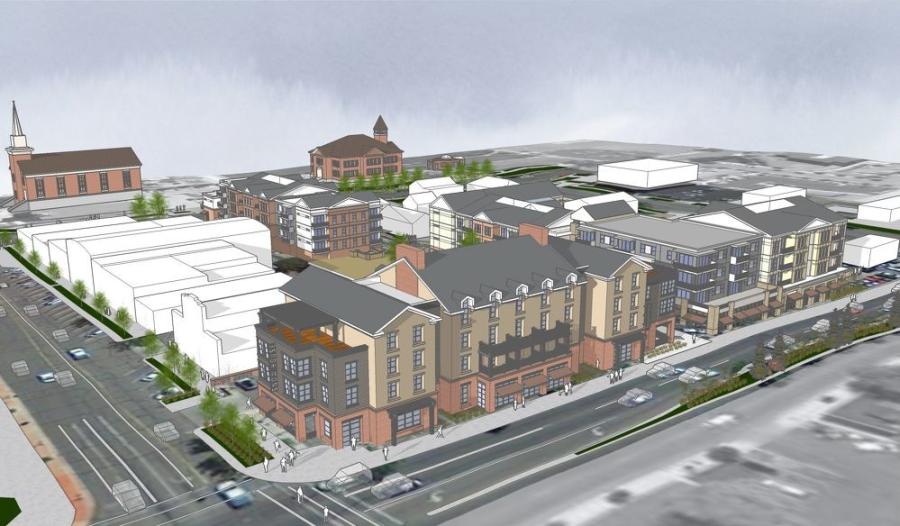 Designed to rejuvenate St. George, Utah's downtown area, City View is finally becoming a reality. After years of planning and discussions, construction has begun on the $40 million mixed-use project. 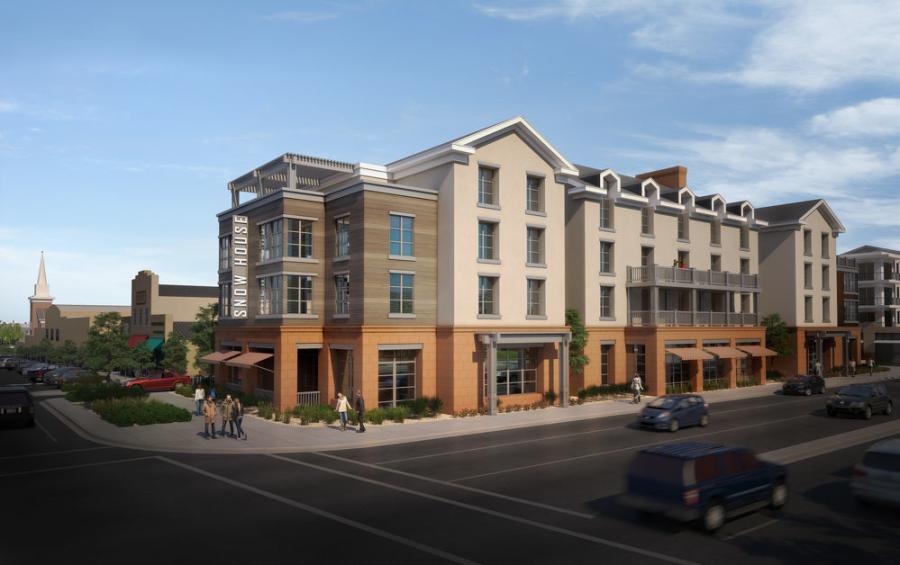 “City View will include The Advenire, a four-story, 60-room Marriott Autograph Collection boutique hotel,” said project manager Matt Hansen, director of multifamily for PEG Development. “The north mixed-use building will be four stories, while the south mixed-use building will be five stories. We're building a total of 110 apartment units, ranging from studio to three-bedroom. The hotel will feature a full-service fine dining restaurant, and the commercial space will end up as restaurant, retail or office.”

In December 2017, developers and city of St. George officials appeared at a ceremony to mark the start of construction on the large-scale investment.

“St. George city manager Gary Esplin mentioned at the groundbreaking that you can judge the health of a city by the state of its downtown,” said Hansen. “While downtown St. George already has a lot to offer, it will benefit from a larger resident population and a beautiful hotel with a high-end restaurant. The hotel also will include a full bar that contributes to the nightlife in the area. Several of the parcels we're redeveloping have been vacant for years and are highly underutilized, so we feel this will be a win-win for the city and the developers.”

Hansen acknowledged that the road to actual construction has been rocky.

“We've been working on this project for [more than] four years now, and rising construction costs have been a major concern. We took a design-assist approach and were still not able to get the project to pencil in the increasing cost environment. It took some creative suggestions from Wasatch Commercial Builders and some significant redesign to maintain the feasibility of the project.

“St. George City wants to see its downtown redevelop, so they formed a Community Development Project Area (CDA), which allows for tax increment financing,” said Hansen. “Basically, the city allows us to redevelop the property, and uses the incremental increase in property tax revenue from our project to pay back the cost of the property. If the additional tax revenue generated by our project isn't sufficient, we have to pay back the difference.”

The apartments were designed to attract both millennials and older individuals, and will feature 110 units, a mix of studio, one-, two- and three-bedroom apartments.

“In our experience, and similarly across the nation, there are segments of the young professional and empty-nester populations that want to live in a vibrant downtown location. Although St. George is a relatively small city, it does have a charming historic downtown that's the most walkable neighborhood in the community. People will enjoy easy access to shops, restaurants, employment and cultural attractions.

“Also, because the project is all within the historic district, our design was closely reviewed by the Historic Preservation Commission and will be timeless. We've already acquired and repurposed Green Gate Village, on the southwest quadrant of the block, from a bed and breakfast to retail shops and restaurants that are bringing more activity to the area. We'll be converting another historic building to the leasing office and part of the amenity space for the multifamily tenants, which will help add to the unique atmosphere.”

The planned hotel is another key feature.

“We are very excited about our first fully-custom boutique hotel property. The hotel will be unlike anything else in St. George, or anywhere in the world, for that matter. We've invested heavily in a custom design and guest experience that will focus on an authentic, luxurious experience that has a flavor of the old west, while also feeling very contemporary.”

Hansen noted that each of the three major buildings could be considered its own phase, but developers intend to build them all as one project.

“The south multifamily and commercial building will probably be the first completed, with the north mixed-use building and parking structure following close behind. The design review process takes a little longer for a custom hotel, so it will probably start vertical construction in the early spring. We anticipate all buildings being fully open and operational by spring 2019.”

“This requires all the contractors to utilize 'just-on-time deliveries' so that all materials are taken from the trucks and installed immediately. To complicate this, there are three separate buildings to coordinate separate schedules.

“Also, this property has been built on several times, and the soil conditions are a bit of a mystery. There are undocumented imported soils, at varying depths, that need to be processed in order to build these tall/heavy buildings without the risk of dangerous settlement. A latticework of overhead power and communication wires need to be relocated, in order to bring in the tall equipment needed to start some of the soil remediation process.” 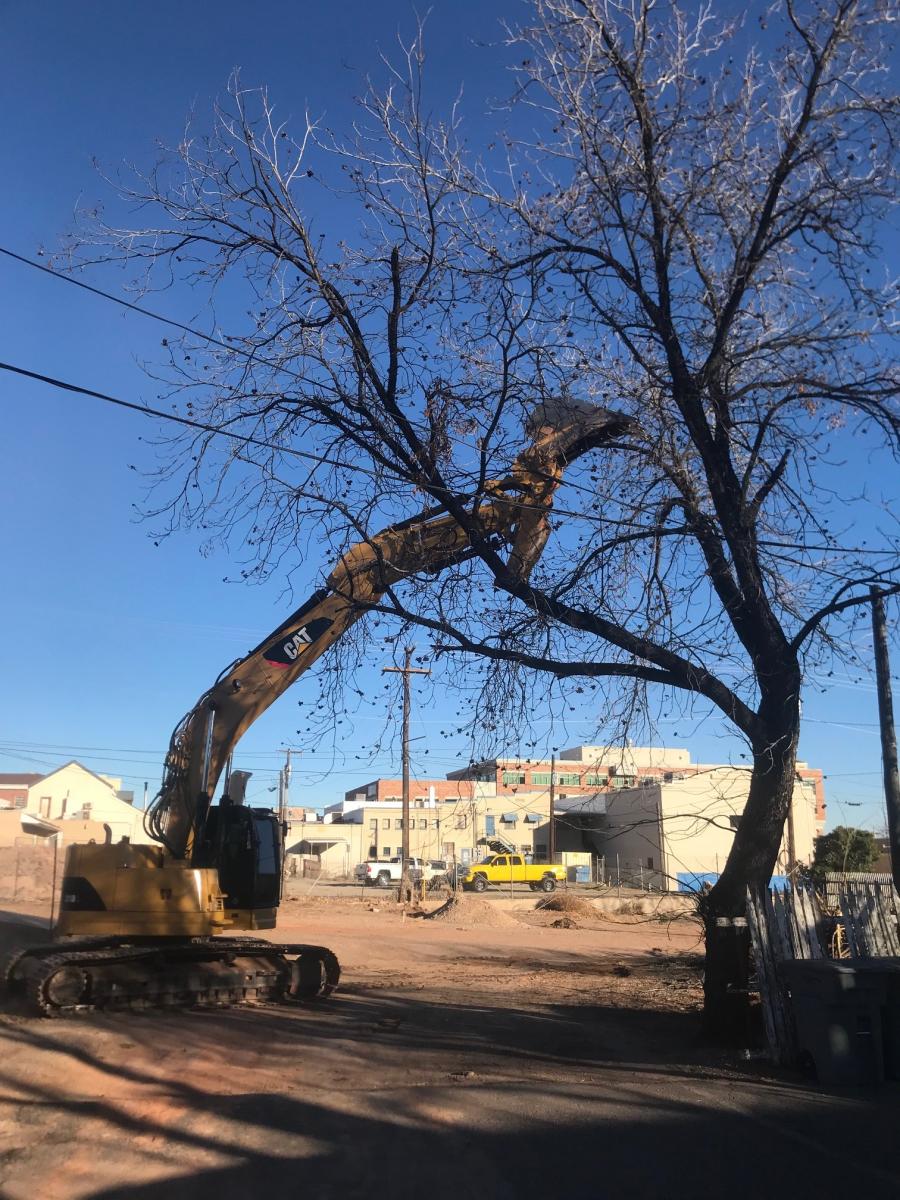 Currently, the overhead lines are being relocated and the remaining demolition of existing pavement, retaining walls and power poles is under way. The mass dirt work is just now getting under way. Crews also are preparing to construct the parking structure.

“Once the shop drawings and engineering for the precast concrete elements are designed and approved, the precast elements will be manufactured near Salt Lake City.

As soon as the cast-in-place concrete footings are in place, the flat dirt crane pad in the center of the parking structure is ready, and most of the precast elements have been manufactured, the precast erection will begin on site. The precast structure will be erected all four levels high from left to right, not bottom to top, in a matter of weeks, with steel braces to the outside.”

Prior to construction, there were a few old buildings, pavement and retaining walls that needed to be torn down, before crews could move forward on the actual building process.

“Since the location is right at the center of town, it has been quite a history of property use and ownership,” said Messenger. “The city of St. George is involved and concerned about how this property is developed. In fact, the landscaping and most site improvements are intended to be open to the public and maintained by the city as an extension of their park directly south of this project.

“The soils are not suitable for buildings as tall and heavy as we are going to build, so we have to bring in additional 'structure fill' to place beneath the buildings and install aggregate piers down to the bedrock under the concrete parking structure.”

As for the required excavation, “The project went under a major redesign, because the cost of excavation work put this project way over budget,” said Messenger. “The original design had two levels of underground parking beneath each of the buildings. This required a large amount of export haul and disposal of unsuitable soil, special shoring up against neighboring property and St. George Blvd., and some complicated post-tension concrete transfer slabs.”

The new design includes enough parking for both apartment buildings and the hotel in one above-ground, pre-cast concrete parking structure that's wrapped by apartments and some retail space. This reduced the amount of excavation work and accelerated the schedule.

“The largest portion of our schedule is allocated to the wood framing,” Messenger added. “It's very labor intensive, and labor in the St. George market seems to be even harder to supplement than in the Wasatch Front.”

According to Justin Heppler, AIA, project principal, ajc architects, the project has been a team effort.

“PEG Development and ajc architects have been working in coordination with the city of St. George on what has been referred to as the largest downtown core development in St. George's history. The City View development represents a flagship project located in the core historic district of St. George and is intended to set the tone for all future development in the area. Project stakeholders placed a particular emphasis on the boutique hotel, which will gently reference a historic hotel which once sat on the adjacent corner.

Heppler said the goal was to create a unique user-oriented experience. Situated at the corner of St. George Boulevard and Main Street, City View will make the most of its location, taking advantage of both vehicular and pedestrian traffic.

“St. George has an objective to enhance its downtown historic district. City View will provide a critical connection between the historic sites north of St. George Boulevard and the Tabernacle block to the south, filling a now sparsely developed block with activity. A public green space will also bisect the block, creating a pedestrian passageway that celebrates the Southern Utah desert and pioneer spirit of the area's early settlers. The pedestrian experience also will be enhanced in the evening, with festoon lighting floating over the green space, creating a festive evening atmosphere throughout the year.”

As for the biggest challenges, said Heppler, “PEG and the design team needed to formulate a strategy to redesign the approach to the parking structure to bring the project back within an acceptable budget. In addition, ajc was required to comply with the historic and cultural look and feel of downtown St. George. Our team worked closely with PEG Development and the historic preservation committee of St. George to ensure the structures would appropriately reference historic vernacular details, while also being modern in form and function.

“One of the concepts that ajc architects studied early in the design effort was that of a 'western homestead', which had been built up to over time, and grew organically. While the development exists within the context of a much larger scale than a typical homestead, it's our hope that City View conveys a contextual reference to a homestead-like character when completed.”

Heppler said the development was created to provide an activity hub that complements both Main Street and the existing downtown retail and commercial elements.

“PEG, ajc architects and the city of St. George would like City View to be a comfortable and welcoming home to its residents and a destination visitors and guests wish to experience again and again. We believe the project celebrates the history of downtown St. George, while boldly looking towards a vibrant future.”